Something Awful Goes to Cancun

Tuesday, Dec 26, 2000 by Rich "Lowtax" Kyanka
Cancun, Mexico. A mysterious city of intrigue, history, and a tourist population which outranks Mexican natives roughly 600 to 1. What could convince me to travel down to a South American city which has a GNP consisting of 97% bootleg Eric Cartman t-shirt sales? How could anything rip me away from my daily regimen of reading emails complaining that "SA NEEDS MORE JEFF K. COLUMNS" and "JEFF K. ISNT FUNNY ANYMORE, STOP UPDATING JEFF K."? I think nobody will be surprised when I reveal it was the same motivational factor that tells people how to dress, what religion is the "correct" one, and who they should fall in love with and ultimately marry. That's right, I could only be talking about the one thing that seems to have veto power over all higher brain functions: my parents.

Since I only visit my parents roughly three times a year, and each of those visits is usually punctuated with a lengthy and heated argument over something incredibly stupid like why the Royals picked up Bill Buckner after his stunning defensive maneuver in the 1986 World Series, I let them talk me into going to Cancun for a week-long vacation. I generally don't enjoy going on vacations, as I have a habit of constantly worrying about my site, my apartment, my cat, the stock market, Jupiter's rotation, and various other things that a normal, sane person wouldn't give a rat's ass about. One of the major downsides to running a website is the fact that you really can't ever escape it; if you stop updating it, people will stop visiting, and then you'll be out of a job. As you can imagine, my parents' month-long campaign of mental blackmail and guilt had it's desired effect, and I ended up agreeing to accompany them with my friend Scott to the city of Cancun, Mexico, a city built around intrigue, mystery, and large amounts of history protruding from virtually anywhere you look. 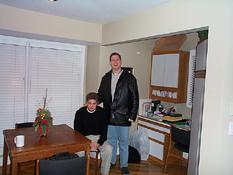 Scott (right) and I (not right) prepare for the early morning fun. Notice the pale look of death on my face.

Like the start of any successful vacation or brutal killing spree, I was forced to wake up early in the morning to prepare. Now I'm not talking about "turning on the TV and seeing reruns of 'WKRP in Cincinnati'"-early, but more along the lines of "theoretical, scientifically baffling" kinds early. The kind of early where if you decided to sleep in for an extra 10 hours, it would STILL be morning. It's the time when CNN could air a report claiming the President was caught trying to buy pig sperm from an Iranian prostitute, and nobody would be awake to see it. This is naturally the best time to fly, because it's easier to stop worrying about your plane exploding in midair if you're about to pass out from sleep deprivation and don't really care either way. When flying at 4:00 am, there isn't really any mental difference between walking off the plane and blowing up in a shower of debris and body parts; the sheer act of touching ground is all that matters.

Our flight was scheduled to depart at approximately -0:30 am, from the lovely Kansas City airport. In case you haven't been fortunate enough to be laid over in KCI or never met the Nazi war criminals who designed it, the airport is essentially a hulking mass of frigid concrete, metal, and brick in the middle of approximately 6,000 acres of abandoned farmland. Airport officials' only attempt at "sprucing up" the place can be shown in their decision to park a mobile hotdog stand next to the women's restroom, so this isn't exactly party HQ. We were fortunate enough to arrive at the airport around 4:30 am on Christmas morning, which means that the flight only carried 99% of its capacity, as opposed to the normal 283% which they try to pack onto each trip. This is known as the process of "overbooking", or "making passengers pay for atrocious crimes they committed in a previous life." 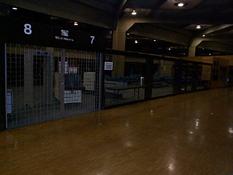 As Scott and I took our places in the "economy" section of the plane, we made our displeasure of my parents' seating in first class known. Yup, for some bewildering reason, my parents and sister were upgraded to the first class area of the plane. I am not exactly sure how, as first class tickets to ANYWHERE cost more than I've ever made my entire life, so I am naturally assuming my dad got into the booming crack cocaine industry. That would both explain where he got the money for first class tickets AND why he felt the urge to actually spend it on plane tickets. If I had that kind of insane cash, I'd much rather use it to bribe the eFront tech support guys so maybe they'd keep my forums up for over two hours at a time without going down for the next week.