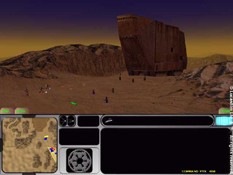 At a Glance: Play as the Evil Empire and attempt to crush the Rebel Alliance, who have somehow sabotaged the game's camera system into making your job a living hell. Don't worry, if you don't like this game, you can always wait a few minutes and another shitty LucasArts "Star Wars" game will come out of the gaping orifice I call the "LucasArts Sweatshop".

When I was a little kid, I watched "Star Wars" all the damn time, over and over and over again. I just couldn't wait to see what wacky shenanigans Captain Kirk would get his crew into next!

Ha ha, I am just kidding because it's fun to have fun! That's just a little "Star Trek" joke at the expense of all the diehard "Star Wars" nuts who love to flood their local congressmen with furious email every time they think Chewbacca is being unfairly misrepresented in a Franklin-Mint commercial for "Star Wars" collectable dinner plates. Let's face it; "Star Wars" is a giant, billion dollar franchise, and George Lucas is getting sloppy with the whole licensing mess. You can see a disturbing trend by merely looking at the list of games they've released, which has gone from a gem like "Jedi Knight" to crap like "Yoda Stories", "Rebellion", "Darth Vadar Versus The Horribly Disfigured Car Salesman", "Luke Skywalker's Interactive Diet Planning Journey", and "Chu Chu Ewok". George Lucas doesn't give a shit about their line of games anymore, and they've pretty much accepted the fact that anything branded with the "Star Wars" label will sell to the public. I can just imagine the board meeting when they were coming up with the idea for "Star Wars: Force Commander": 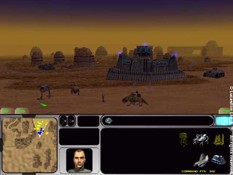 The devastating "Battle For Dirt" rages on.

The plot of "Star Wars: Force Commander" is to blow up everything that the enemy team owns. If you choose to play as the Evil Empire, you must blow up all the Rebels' stuff. If you play as the rebels, you must blow up all the Evil Empire's stuff. Some missions attempt to disguise this central theme by adding in additional goals, such as rescuing humanoid-shaped characters who have enemy soldiers standing around them, but it doesn't really affect the overall feel to the game (loosely labeled as "shitty"). To prepare you for the rest of the pain this game brings, "Force Commander" includes a two level, in-game tutorial which requires roughly seven days to complete and involves memorizing more commands than an air traffic controller. The complex, bloated, ineffective camera system takes up about 80% of these commands, and the keyboard layout seems to have been designed for an alien race with 19 fingers on each hand. After three days of attempting to play this awful game, I still didn't have the hang of the camera system, and often ended up helplessly staring at the flat side of a mountain while all my idiot troops were shot at and killed. My apathy was palpable at that point, and I didn't really give a rat's ass, so I suppose it balances out. Why the hell does this game need a complex camera system to begin with? LucasArts claims it's to show off the 3D engine, but I don't believe that (not the camera reason, I simply don't believe this game has a 3D engine somewhere in it).

The landscape in "Force Commander" is made up of two different things: "flat terrain" and "slightly lower flat terrain". Occasionally the artists attempt to "spice up" the levels a bit by adding things like large trees and some kind of buildings, but they only end up blocking your camera's view and cause you to mash random keys in the vain attempt to somehow get around them (hint: you really can't). These objects seem to just be screaming out, "Look! We have a 3D engine! And we're USING IT!". I'm sure all the programmers at LucasArts are very proud of the work they've done on this game, and probably should be. They chose to spend twenty years of their life creating this game instead of doing what they really wanted to do: going down to the local orphanage and beating the handicapped children with strips of sheet metal.