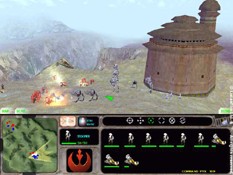 Troops prepare to overtake this giant coffeemaker.As expected, you can control your favorite "Star Wars" vehicles in this game, ranging from Dewback Riders (brown lumps), AT-ATs (grey boxes with feet), Stormtroopers (white blobs that periodically emit red lines in the general direction of their enemies), to Hover Bikes (some kind of floating dining utensil), Droids (marital aides), and various other poorly defined objects. Since LucasArts wanted to stretch out the time it takes to beat the game, they made sure to make each map at least 50,000 square miles of flat terrain.

The edges of the map are represented by being totally empty and void of any content, kind of like... nah, that's too easy of a joke. Once you are able to find the enemy, and assuming you have the skill to successfully manipulate the camera within a few hundred yards of the battle, you must then fight with the AI, which appears to rival that of many enemies from "Commander Keen" (not to slam on "Commander Keen", as it was a great game compared to this). Your guys will shoot at enemies, and even though an object like part of the landscape or a tree or another creature may block their shot, they'll keep shooting until they die. Apparently they're very loyal, but also very stupid, so maybe they're actually religious fundamentalists in Storm Trooper costumes. Ha ha, just kidding, religion is a sacred, holy thing! I I should not make fun of it, and I'm not just saying that because religious fanatics seem to love sending me angry email every time I mention "Jesus" in the same sentence as the word "groin".

The game's interface is a mess as well. It's clunky, ugly, and slow as hell. It can be accurately summed up as "a lot of straight, grey lines". Somehow it takes the game a good thirty minutes to load it up and display it, so if you're playing in full screen mode and suddenly need to switch to the console, expect to have all your units dead by the time the console finally appears. Hell, you should expect to be collecting social security benefits before the console comes up. To top it off, the font type and character representations at the bottom of the screen are small, blurry, and fairly ugly (this seems to be an ongoing theme with this game).

"Star Wars: Force Commander" is not a very good game. In fact, one might even claim it is the opposite ("a very bad game"). One might even take that a step further and suggest it is something awful. I would not disagree with that claim. It is obvious that LucasArts doesn't really give a shit about their games or their fan base anymore, as they've been consistently pumping out steaming mounds of shit for quite some time now. The simple fact is that "Star Wars" = "money", and they could probably slap Obie Wan Kenobi's face onto the Atari 5200's "Maze Craze", call it "Escape From the Death Star", and it'll still end up selling. Who's to blame in this situation, the people who buy the game, or the people who sell it? Beats the shit out of me, and frankly I don't care. As long as this review keeps one innocent person from spending their hard-earned drug money on a shoddy product like "Star Wars: Force Commander", my job is done.