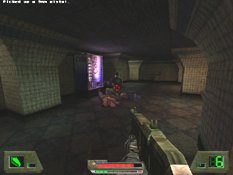 At a Glance: You are a Soldier of Fortune. You are supposed to kill many, many people. Is it just another standard FPS or does this demo successfully break away from the rest of the pack?

With the huge leaps and strides the computer industry has been making in video cards, CPUs, and computers in general, the gaming public can essentially buy one intense graphics workstation for under $2,000. The sheer horsepower of this advanced technology is allowing the game industry to produce games that are becoming increasingly more lifelike with every generation. One faction of gamers is clamoring for "realistic" games and mods such as "Rogue Spear" and "Counterstrike" which require patience, skill, and planning to play. Another group of players is loyal to the "Doom" generation of first person shooters which stress twitch reflexes and an itchy trigger finger. Where the hell do these two groups meet? 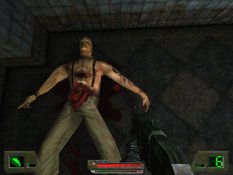 Yay! I killed a guest from the "Jerry Springer Show"!

Raven Software is hoping the answer will be "Soldier of Fortune", a game they're aiming at both the tactical and twitch crowds. Can one game possibly satisfy both of these hardcore, demanding gamers? Can a delicate balance between realism and fun be found? Is Maria pregnant with Brad's baby? I recently played the "Soldier of Fortune" demo to find out the answers to these burning questions, although I never did learn about the relationship between Maria and Brad.

Raven Software has made it publically clear that their business is solely designing games, not the engine technology powering them. They licensed the Quake 2 engine for Heretic 2. They licensed the Quake 2 engine for "Soldier of Fortune". They licensed the Quake 3 engine for "Star Trek: Elite Force". Every time Kenn Hoekstra goes to pick up groceries, he swings by id Software's building and licenses an engine just for the heck of it. In the back of his Chevy truck, there's about 40 Quake engines, just lying around all over the place. But make no mistake, they don't just grab the engine and try to turn it into just another mod; Raven Software makes dramatic changes to the code and attempts to revamp it into an entirely new product. Raven has incorporated the "GHOUL Rendering System" which helps separate "Soldier of Fortune" from any ol' Quake 2 product by the following features: