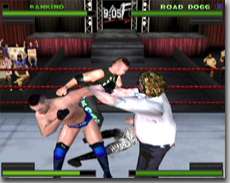 At a Glance: "WWF Attitude" is the first wrestling game for the Dreamcast to give wrestling fans what they really want: sluggish controls, boring gameplay, awful voice overs, terrible models, incomprehensible attack combinations, and the graphic equivalent of a direct Intellivision port.

Maybe Acclaim lost a bet. Perhaps the lead designer was suddenly stricken with an awful case of Legionnaire's Disease. There's a chance everybody working on "WWF Attitude" lost their eyesight after ignoring their mothers' advice of "if you keep doing that, you'll go blind." I really can't think of any other reasons a game this terrible could exist.

I admit right now that I'm not the biggest wrestling fan (let the flame mail begin); many of the wrestling "events" I've seen appear to be nothing more than over-dramatized and incredibly bogus scenes of large, sweaty white guys laying on top of each other while their "managers" storm around the outside of the ring, pausing only to be hit by a chair. The punches and kicks they throw can land a good 15 feet away from the opposing wrestler and they'll still act as if they were hit. The majority of these "athletes" have the same muscle mass that can be achieved by going on a diet consisting solely of beer and shots of pudding. 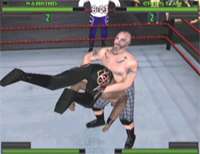 However, wrestling still has a good amount of redeeming factors. People pretend to beat the unholy crap out of each other in front of millions of people. Men dress up in costumes suitable only for Halloween parties or perhaps Elton John tours. And despite whatever anybody else says, wrestling exposes a good percentage of the redneck youth to a healthy amount of homosexuality that they would otherwise have to seek on the Internet.

The object of "WWF Attitude" is simple; choose an overweight white guy in tights, pick another one to fight against, then get into the arena and fall down until you run out of health. As far as simplicity goes, this one is hard to beat. However, when it comes to executing this idea, the game fails miserably. The basic routine of the game executes as follows:

2. Wrestlers shout poorly voiced dialogue at each other without moving their mouths.

4. Computer wrestler routinely beats the crap out of you by using complex, painful attacks. You figure out how to kick.

5. Announcers / Commentators make idiotic comments until either your character loses or you go insane. You determine the secret 10-button combination that allows you to block (sometimes).

6. Game is returned to "Best Buy", but they claim you can only exchange it for the same title. Death threats are emailed to Acclaim and the president of "Best Buy". You end up having to serve a short prison sentence and, while in prison, are forced to engage in many of the same activities you saw in "WWF Attitude". Somehow it ends up being less painful.

The models for the wrestlers are some of the most stiff, unrealistic, bland things I've ever seen. The pale, fleshy men of "WWF Attitude" seem to be composed of up to 20 polygons, many of them residing in the waist area. The faces, which take up a whopping two polys (for the left and right side), have skins that look as if they were created in Microsoft Paint by an eight year old with a thyroid problem. If you squint and forget to take your medication, the wrestlers kind of look like their human counterparts. Kind of. Once you're feeling really wacky, you can play "Guess the Wrestler" where you try to discern your character from nearby objects ("That's Bret Hart!" "No, sorry, that's your armchair"). Did I mention how incredibly awful the crowd art / animation is? The audience in this game is apparently composed of hyperactive robots with three frames of animation, two of which involve waving a "John 3:16" sign. There's a total of five different audience members so the game looks like you're fighting in front of "Clones Get In Free" night at the local YMCA (as if there weren't already enough screwed up chromosomes in the wrestling gene pool). 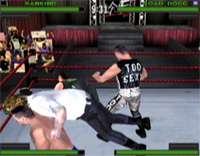 Unable to afford a telephone booth large enough to accommodate both the voice actors and the tape recorder, the sound seems to have been recorded in one of the producer's closets. All the voices are dull and uninspired, wrestlers saying their catchphrases with about as much enthusiasm as a proctologist on downers. The color commentators / announcers spew a series of grating comments, each one exponentially more obnoxious than the previous. Sound effects can be faithfully reproduced by knocking various stuff off your living room table and saying "Ung!" and "Oof!"

Hmm, what else did I miss? The collision detection system in this mess was apparently programmed by Stevie Wonder, as wrestlers' arms and legs routinely go through the enemy and the floor. The wrestlers are slow and unresponsive, often achieving the speeds of patio furniture. Game controls are terrible at best, requiring complex and bizarre combinations to perform even the most simplest of attacks.

What am I saying? "WWF Attitude" is terrible. There's no redeeming quality in this game whatsoever. Instead of playing this mess, lock arms with a friend and ask him to beat you mercilessly while somebody else makes idiotic comments and cackles like a retard on crack. It will be less painful.