When is the "best time" to visit Disney World?

Experts encourage travel to Orlando, Florida during the mythical "off-season," a two-hour time frame from 1-3:00 AM on December 8th. Please keep in mind the term "off-season," when referring to Disney World, simply means "only 400,000 fat Americans and incoherent foreigners will surround you at any given time, like a convention of electrons orbiting an atom."

Essentially, the "best time" to visit Disney World is "never," so attempt to schedule around that date.

Where should I stay at Disney World? 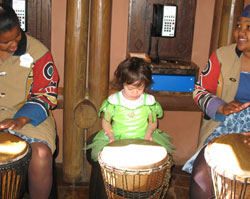 Drums and pay phones, the authentic Disney experience.Disney owns and operates a perpetually growing, mutating list of "theme hotels" scattered throughout their 400,000 acres of real estate near Orlando. Regardless of where you stay, this theme is always "give Disney all your money." Each hotel can be easily summarized with the following descriptions:

All Star Movies Resort - A dumping ground for the less popular Disney franchises they couldn't pawn off anywhere else. Feel free to stock up on all the "Home on the Range" and "Atlantis: the Lost Empire" enema kits you can find.

All Star Sports Resort - Disney sterilizes and removes all the best aspects of sports (injuries and cursing) and replaces them with family-friendly values designed to improve society (using money to purchase things).

All Star Music Resort - Stay here and discover Disney's revolutionary opinions regarding love ("it's good") and their insightful examination of today's modern society ("some girls want to kiss boys").

Yacht Club Resort - Tie a fruity white sweater around your neck and mention your comprehensive list of political contacts, confident in the fact your parents raised you to be the world's biggest asshole.

Polynesian Resort - I think there is a canoe or something on display in the main lobby. It was manufactured in Japan.

Contemporary Resort - A monolithic slab of decaying concrete popular with vacationing Eastern Bloc refugees who make smarmy comments like "oh you AMERICANS with your MICKEY MOUSES and GEORGE BUSHES." One of the first hotels to offer bed comforters stuffed entirely with rebar.

Boardwalk Inn - "Beautifully appointed rooms, shingled rooftops, private courtyards and magnificent gardens combine to recreate the charming atmosphere of romantic bed-and-breakfast inns found along the mid-Atlantic coast of the 1940s." This is an extremely verbose, eloquent way of saying "there's a carousel in the lobby. It does not work."

Grand Floridian Resort - Placing a mini-Florida inside Florida is like raising an exponential value to another exponential value of elderly people aimlessly wandering around, waiting for a phone to ring and inform them they're dead.

Coronado Springs - The Spaniards invaded the Yucatán Peninsula in the 1500s, stole all their money, and murdered the ones who refused to convert. There's an analogy to be made here, but I simply cannot locate it.

This line leads to another line. Yay!Port Orleans (French Quarter) - It's just like downtown New Orleans, only without all them pesky black folk.

Port Orleans (Riverside) - A quite authentic and realistic representation of New Orleans immediately after Hurricane Katrina.

Old Key West Resort - "Oh gosh, the adjective used to describe our residents somehow slipped and fell into our hotel name, we sure fucked up on this one."

Villas at the Disney Institute - I have no clue what this place is, and have never even heard of "the Disney Institute." Perhaps you can book a room with Disney Scientists who spend all day analyzing things to determine if they are Mickey Mouse or not.

Fort Wilderness Cabins and Campground - The Disney resort equivalent of the kid in your high school who wore his older brother's Poison t-shirts, ate Kool-Aid for lunch, and would get violent when somebody insinuated his family was poor just because they decorate their home with traffic cones.

The Dolphin - Catering to obnoxious yuppies who name their spoiled brat children "Katelynn" or "Ashelynn."

The Swan - Catering to obnoxious yuppies who name their spoiled brat children "Brooklynn" or "Kennedynnynn." Actually, I believe that last name is one of Cthulhu's.

Next week on part two of "Surviving Disney World": the second part which follows the first!