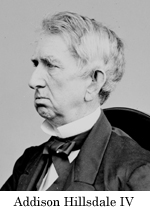 Back in The Gilded Age, life was a struggle for most. You would claw your way out of some filthy womb, only to find yourself chained to a smelter for 12 hours a day whilst slowly being choked to death by consumption and smelter fumes. In my home village of Kingsfordshire, it was so rare for a child to reach the age of ten that we would hold a week-long celebration of drinking laudanum and pummeling the infirm and retarded whenever this uncommon event would happen. Then came the accusations of witchcraft, followed by public burnings -- but I digress.

Thanks to so-called "medical progress," our modern society now contains so many children that giant compounds must now be built to house their belligerence. While this column was originally intended to be yet another editorial excoriating that subversive and politically repellent comic strip, "Beetle Bailey," at the shrewish insistence of my new woman editor, I was forced into attending the grand opening of one such juvenile prison, titled "Disneyland." Now the world can bear witness as to why I would sooner give a typewriter to a street mongrel than to a member of the weaker sex who is clearly suffering from terminal menstruosis -- for I was not amused in the least. 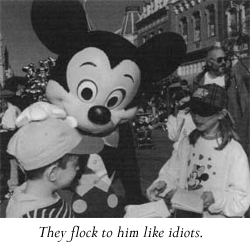 Now, I must admit that I can find no fault with Mr. Walt Disney himself. After all, this ruthless entrepreneur made untold millions by enticing the unscrubbed of our nation to pay upwards of twenty-five cents to watch a crudely-drawn mouse cavort and caper about like some sort of addle-brained Swede. He should be commended for distracting these brutes from their deplorable lives of incest and phosphate parties. And the very idea of such a large-scale exhibition brings me back to those carefree days of my young adulthood, when I commonly frequented World's Fairs to see if a certain Thomas Edison had any new cinemas of elephants being violently electrocuted. But when I stepped through that gates of this Stygian nightmare, this veritable Land of Disney, all fond memories absconded from my brain muscle.

A man, dressed like an anthropomorphized vermin, tried to hand me a balloon. I planted a fresh wheat penny into his hand and replied, "This should purchase the necessary amount of arsenic to silence your buffoonery. I suggest you do so posthaste, lest you anger my gallbladder further." He backed away slowly, unsure of himself. I can only assume he has since entered the faceless, shapeless void of nothingness known as Hell. I have seen it often in my visions.