Jones Soda vs. Something Awful

Jones Soda has done an outstanding job cultivating their company's image as the small dogs scampering about the corporate kennel of soft drinks. They're no Pepsi or Coca-Cola, they're the guys who slap photos of ugly children on their bottles and try to poison you before your parents' holiday dinner. Perhaps I was the victim of a competent, savvy marketing team that led me to believe Jones Soda represents an alternate choice, a vote against the two multi-billion dollar high fructose corn syrup empires.

Then we released this Photoshop Phriday.

Jones Soda responded by promptly launching lawyers at us, perhaps because there's not much to do around the ol' soda factory these days. Maybe they're trying to stimulate the economy by paying legal teams to send me angry letters, in which case it's only a matter of time before Barack Obama grants them a major award for hopefully encouraging hope and change in a changing environment of hope. Victor N. King, member of the "Speckman Law Group" in Seattle, jammed the following exciting Adobe .pdf lawsuit up my inbox: 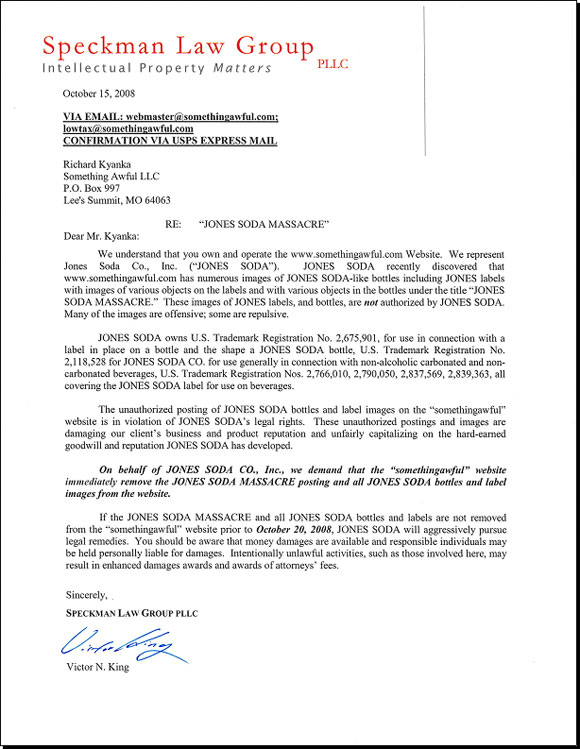 My goodness! Did you see the subject line of the email? I was sent a whole wheelbarrow full of CONFIDENTIAL and PRIVILEGED information that they normally only share with their CEO and maybe Jesus Christ. Initially, I naturally assumed this website was doomed, and subsequently began burying myself in the backyard. Then I snapped to my senses and remembered I had an important weapon at my disposal; the esteemed Leonard J. Crabs, lawyer at arms!

Many people love to threaten to sue us. Luckily we have both Leonard "J." Crabs and common sense on our side, thus enabling us to easily defeat such trivialities. Remember - when you're on the Internet, you can threaten to sue for anything!