Steve and Zack trade places again with Steve behind the Keeper's screen running this third installment of Mansions of Madness, a collection of adventure scenarios for the 1920s era Call of Cthulhu. Following a narrow escape from the collapsing underground lair of the serpent sorceress, strongman Ivan Karnov reunited with the misunderstood Mexican, Chang the Celestial, and stag film star Sharon Derriere. They are joined in this installment by three new characters. Two from Steve and one from Zack. But first, let us honor the fallen.

Pips Codswallop - WWI Aviator - Opened the wrong door and snuffed himself out with a pistol.

Cecil Talbot - Dashing Dilettante - Left by his supposed friend to be chewed by the same reptile monsters. 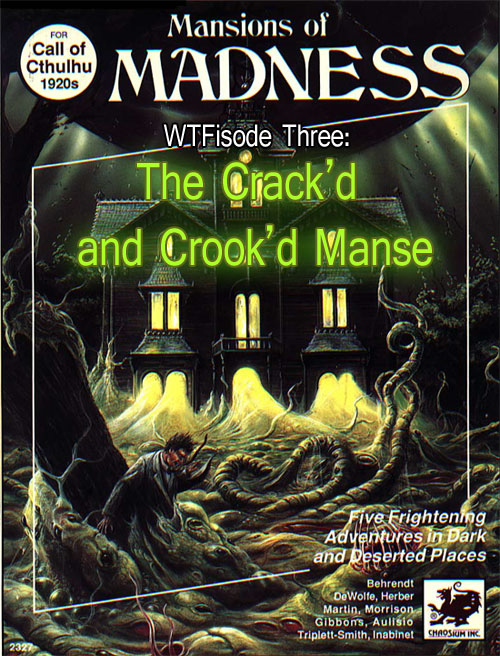 Zack: Welcome to part three in our quest to get everybody in the original party killed off.

Steve: I am a nurturing keeper. I killed off one guy in the first adventure. You killed off three people including your own main dude!

Zack: So on that subject, I have a new main character planned for this installment, but what are the two supporting characters you dreamed up?

Steve: Well I remember in the last adventure Karnov had a lot of trouble using the library and since Regina was good at it and she died I decided to fill that role. Wayne Poppins, Master Librarian. This guy is the A-Rod of using a library. In the librarian museum underneath the Library of Congress there is already a little diorama set up of this guy reading a book like crazy.

Zack: At least he sounds useful.

Steve: The other character I came up with watching an episode of the Mentalist.

Steve: His name is Chance Wolf. He's basically the Mentalist, only his expertise is martial arts fighting and using martial arts weapons and also sniper rifles.

Steve: No, pretty much just the martial arts stuff. He's muscular and he always wears a thick white turtleneck and a suit jacket like a professor jacket.

Steve: I said, I came up with him while watching the Mentalist. Now tell me about your guy.

Zack: Billiam "Mitch" Nestle is a precocious eight-year-old boy. His father owns a company that made poison gas artillery shells for the Ottomans during the Great War. He took up an interest in the occult when he traveled to the Himalayas and saw a huge, winged creature descend from the mountain mists and devour several Sherpas.

Steve: You're going to play an 8 year old?