What looked to be a rather dull weekend has turned into a series of bizarre fascinations. Firstly, Tim Burton's Frankenweenie endears itself to Joseph "Jay Dub" Wade from beyond the grave; then Ian "Professor Clumsy" Maddison examines why the self-parody of Taken 2 doesn't work at all; and Sean "Keanu Grieves" Hanson is shocked and appalled by the despicable worldview presented in Pitch Perfect. Finally, Martin R. "Vargo" Schneider watches Butter and... well, maybe they're not all fascinations.

EXPECTATIONS: Man, I am seriously not looking forward to this. It may seem like the Cool Film Snob thing to say, but I've grown incredibly weary of the Tim Burton aesthetic. Can you blame me? Between this summer's unfortunate misfire Dark Shadows and the towering CGI inferno known as Alice in Wonderland, I feel like I have every right to expect the worst from Frankenweenie. ParaNorman is going to be a tough act to follow, so at the very least I hope Burton has a trick or two left in the sleeves of his Jack Skellington hoodie. 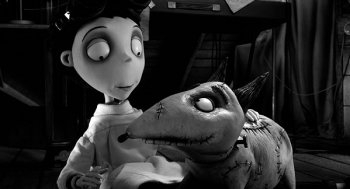 A boy and his reanimated dog corpse.REALITY: Having now seen the film, I'm honestly not sure what I was so worried about. Free from the trappings of garish CGI, and with neither Johnny Depp nor Helena Bonham Carter in sight, Frankenweenie finds Tim Burton distilling his various tics and quirks as a filmmaker into one concentrated work. While short on humor and almost completely predictable, this is a film that's intelligently written, often fascinating in its animation design, and easily the best film Tim Burton has made in nearly a decade.

Young Victor Frankenstein (Charlie Tahan) is the weird kid in class who actually enjoys learning about science (as opposed to the other weird kids who just sit and twiddle their thumbs). After his beloved dog Sparky is run over by a car, his parents (Martin Short, Catherine O'Hara) encourage Victor to cope with the loss any way he can. In response, Victor concocts a plan to zap the dog back to life in a scene lovingly recreating James Whale's original Frankenstein. When the plan works, a hunchbacked little shit named Edgar (Atticus Shaffer) finds out and starts blabbing about it to the other kids in school. Victor and Sparky's secret is out, and soon the town is overrun with undead animals from the local pet cemetary.

Adapted from Burton's own short film of the same name, Frankenweenie expands in a few fairly obvious directions, but at no point do things descend into narrative wheel-spinning or pointless digression. Screenwriter John August does a bang-up job of fleshing out the town of New Holland with eccentric characters whose own agendas practically beg to be explored, such as Victor's science teacher Mr. Rzykruski (Martin Landau), whose love for science is so great that it pains him to live in such a superstitious, closed-minded town. 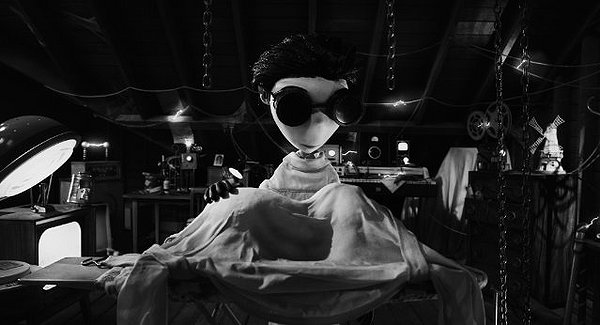 The other white meat.

While the film's plot can be boiled down to "Two parts Frankenstein, one part Godzilla," Frankenweenie absolutely shines when it takes the time to forge its own path. One of the themes new to this adaptation is exploring the proper use of science. In his opening scene, Mr. Rzykruski explains lightning as protons betraying their cloudy homeland and emigrating to the land of prosperity known as The Ground. This is nice and poetic, but it's also kind of insane and leaves his students scratching their heads. Only when he hooks up a dead frog to a generator do the kids realize the practical application of science. From there, the film explores not just the Hows of science (Lightning + dead animal = life; simple enough), but also the Whys. Why does Sparky come back to life while Edgar's experiment fails, and more importantly, why is playing God such a big deal? 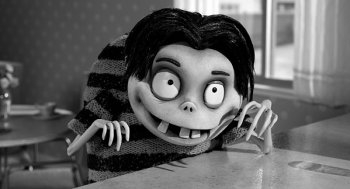 First person to say "Igor" gets sent to the back of the class.Greater than the film's apparent love for science is the film's even more apparent love for movies. Tim Burton lets his passion for classic monster movies run wild here. Victor fashions himself an amateur filmmaker; his own short titled "Monsters From Beyond!" opens the film, and features stop-motion army toys and Sparky dressed up to look like a giant lizard. Elsewhere, New Holland drips with cinematic ephemera, ranging from the town's Hollywood-esque sign to the angular shadows and architecture that stretch through the town like a German Expressionist maze. Frankenweenie is as much a love-letter to cinema as Burton's earlier Ed Wood, and it's that love that drives much of the film. Just like Victor's love zapping Sparky back to life, it's Burton's love for his job that energizes this movie.

Visually, Frankenweenie is marvelous. The character design is reminiscent of Burton's earlier stop-motion film Corpse Bride, and while the characters often look too precious to be anything but a Hot Topic patch, great care was taken to give these people nuance and personality. Perhaps the most striking character design is Mr. Rzykruski, whose elongated face bears a ghastly resemblance to Vincent Price. However it's Sparky, ironically enough, who is the life-blood of this film. Originally a bull terrier in the live-action short, the animated Sparky is a squatty little turd of indeterminate breed (he certainly isn't a dachshund as the title implies) whose undead gaze is, quite frankly, adorable.

While the film isn't nearly as vibrant or ambitious as this year's ParaNorman, Frankenweenie is a triumph of film-geeky animation. There's a vitality and giddiness in this film that has been sorely absent from Tim Burton's output as of late. He just couldn't resist throwing in a character like The Weird Girl, who looks callously designed to be awkwardly stitched onto black backpacks and swirly hoodies, but this is the Tim Burton who created that market in the first place. It's nice to have that Tim Burton back, if only until his next abomination lumbers into theaters and makes me nauseous all over again.

MINORITY REPORT: I, too, have dabbled in the reanimation of the dead using electricity. Unfortunately, the bodies were not in prime condition and what I gave them could not be described as life, only as extreme burns and severe eye damage. It may be true what the coroner said, that they were not dead at the time the experiments were carried out, but if that were the case then the second dose would surely have revived them? - Montague "Legally Sane" Smythe