UPDATE: I am adding this note at the top so that some of you from the comments section pay attention. Read it as many times as is required for you to understand what I am saying: I have not watched any of these movies. Films, with the exception of a few documentaries, are frivolous distractions from the pursuit of justice. I specifically do not claim that these are reviews of movies, they are descriptions and analysis of Academy Award nominated films, derived from factual information. If you say that they are reviews and that I should watch the movie first you are only making a fool out of yourself.

Oscar time is here again. I have little respect for the profession of Hollywood filmmaking, I feel it falls somewhere between cola marketing and pornography, and honoring its producers is inherently ridiculous. However, movies have an unfairly profound effect on our culture and so I feel it is necessary to discuss this year's uniquely problematic nominees for Best Picture. 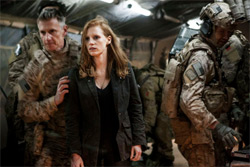 Action scenes at the end may justify "Zero Dark Thirty" to the blood-hungry chest-thumpers that celebrate a murder, but the pro-torture propaganda makes the film a poison pill.It should come as no surprise that Kathryn Bigelow, the director of 2008's celebration of American imperialism, "The Hurt Locker," has returned to form with "Zero Dark Thirty." Claiming to be journalism, and working closely with the Obama CIA, Bigelow's latest is a mendacious account of the pursuit and murder of Osama Bin Laden. She has effectively become the 21st century's Leni Riefenstahl, portraying a Manichean world in which, as The New Yorker's Jane Mayer puts it, "They believe torture is not a necessary evil, but rather a necessary good." Although some have disputed the assertion that Bigelow's film advocates for torture, I remind you all that one of these people is insufficiently repentant Iraq war booster Andrew Sullivan. We can only hope the Academy considers his endorsement.

Watch "Argo" and witness evil turning to good and villains portrayed as heroes, or so I have read.After reading several articles about "Argo," the idea of Ben Affleck running as a United States senator is beginning to sound scary. This Hollywood hagiography of the CIA's attempts to subvert the government of Iran manages to glorify an agency of state-sanctioned murderers, as well as crediting Hollywood itself, the industry that helps perpetuate the mythology of the noble CIA agent. As Jeremy Scahill noted in his article on "Argo" for The Nation, a true history of the CIA's involvement in Iran would begin with the CIA's shameful 1953 overthrow of the democratically-elected president Mohammad Mosaddegh to protect British oil interests. The Academy's incestuous salute of a film like "Argo," a film that helps promote a pernicious falsehood as noble, puts the Academy on the same level as Julius Streicher, publisher of Der Stürmer, and chief hate merchant of the Third Reich. "Argo" must not win. 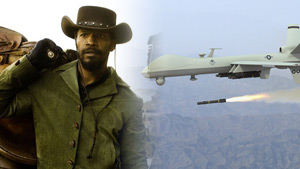 Unfortunately, present-day Django would face something far worse than chains.I have not yet seen "Django Unchained," nor do I ever intend to see it, but based on what Ta-Nehisi Coates wrote for his excellent piece at The Atlantic, I am dismayed Tarantino's latest ahistorical murder orgy is being considered for the honor of Best Picture. Tarantino's prodigious use of the n-word is ironic considering we live in a time when it is impossible to even offer rational criticism of Barack Obama without being piled upon by his defenders. I ask only for the Academy to consider a simple question before final voting. Would an African tribesman rather be shackled and placed on a slave ship and brought to the United States or, as is the case in the America of Obama's progressives, eliminated from history without due process by an American drone? I am considering asking Ta-Nehisi Coates this also, but I need to be very careful about how I phrase it on Twitter. 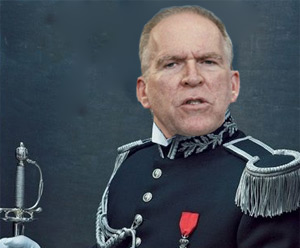 The unthinking beast of law could not find a more brutal rider.I rarely read fiction, but when I was a child I read Victor Hugo's "Les Misérables" and found it tolerable. In fact, I could not help but recall Javert, Victor Hugo's oppressive policeman, when President Obama nominated John Brennan to head the CIA. The key difference being that Javert loses all sense of morality in hewing to the letter of the law, while Brennan, as MSNBC's Chris Hayes recently explained, subverted the law itself to conduct torture and expand Dick Cheney's drone program during the Obama Administration. Barack Obama's decisions to expand Bush-era counter terrorism strategies and his failure to prosecute war criminals like Porter Goss and Donald Rumsfeld have enshrined many of the catastrophic decisions of the years following 9-11. Victor Hugo understood that orthodoxy, established by the oligarchs, was doom to an underclass victimized by the henchmen of capital. Naturally, Hollywood has perverted the messages of justice present in the book to produce a pageant of irrelevance seemingly isolated from modern America. I have not watched the film. May the Academy follow my example. 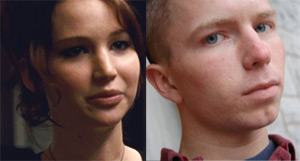 The silver lining to this film is the subtle reminder that Bradley Manning is still suffering.I did not watch this film, nor have I read any articles pertaining to it, but I have seen the trailer playing on a flight I took recently to appear on the Democracy Now! TV show. I am normally disgusted by any sort of tribalism, particularly the empty distraction of American professional sports, but I took notice of "Silver Linings Playbook" star Jennifer Lawrence. From just the right angle she bears a striking resemblance to unjustly persecuted whistle blower Bradley Manning without his glasses. I do not know if this was intentional on the part of the filmmakers, but with little else to decide this moronic contest of excess, I recommend this film for the Academy Award for Best Picture.

Were the Academy Awards an actual meritocracy, it is clear that Peter Jackon's "The Hobbit," which mocks conventions of good cinematography, subverts fundamental Hollywood truths like "frame rate" and "not vomiting," and elevates the least among us to heroes, would be the winner for Best Picture. "The Hobbit" disposes of the bourgeois notion of the great figure of history. Of course Bilbo Baggins is the right man for the job; we are all Bilbo Baggins, a part of a movement for justice, rather than a figure elevated to the heroic.

I have seen this film several times and will be seeing it again.