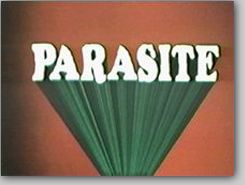 Overview: A large, doughy lump of sperm with teeth grows out of a man's chest and terrorizes a town of about six people. Demi Moore shows up and plays the role of "Demi Moore", who is content to stand around while events occur in her general vicinity. Eventually some kind of conclusion is reached involving an explosion and laser gun, but I can't really get more specific than that.

The Case For: Movie jacket does not appear to have a translucent coating of neural poison which will eat through your brain and kill you within seconds of physical contact.

The Case Against: Watching the movie can lead to even more unpleasant effects. 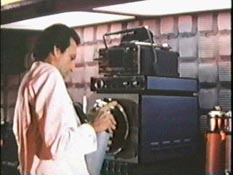 The coffee machine can make both regular and decaffeinated, so it's obviously VERY hi-tech.

If you're like me, and I know I am, you just love those "Before They Were Stars" spots that entertainment tabloid shows like to run. You know what I'm talking about; the specials which show the commercials Arnold Shwartzenegger did back in 1972 for "Mama Gustavo's BBQ Hut and Chicken Bonanza". It gives us all a gigantic, ham-sized woody to know that even the biggest celebrities had pretty crappy jobs at one time or another. I would suggest that "Parasite" is an example of this, showing that Demi Moore once worked dead-end, awfully produced films, but I've taken a look at her recent acting credits and I don't think she's quite escaped that phase yet. Maybe, just maybe, one day when she's taught how to act and stars in something that requires more talent than "being able to focus on predetermined objects for a short period of time", we'll be able to point at this film and laugh at her. Or point at her and laugh at this film, whatever works best for you.

"Parasite" is a deep and enchanting look at love, lust, and the human spirit. Hmmm, no wait, I seem to have my notecards mixed up, "Parasite" is boring romp through the "post apocalyptic future", which is supposed to be 1992. Apparently, the "post apocalyptic future" is our "pre, non-apocalyptic past". According to the film, there was some kind of vague, moderately damaging world war that took place in 1991, where atomic bombs were detonated nearby, but not actually in, major cities. To show proof of this, one of the major characters has a scar on his face, and he repeatedly references it throughout the film. That's all the convincing I need, thanks movie!

The flick kicks into high gear by showing some guy laying down, strapped to a table. There's a whole lot of bright orange lights and fog everywhere, which made me immediately think, "hey, with all this fog and awful lighting, this must be a medical laboratory of some kind!" It turns out that I was correct, and some doctor is performing "scientific" experiments on this unfortunate bastard strapped to the table. To further reinforce the "high-tech" feel of the room, there's an oscilloscope in a corner. It was set to "square wave", which, as everybody knows, is a lot more advanced than the clichéd "sine wave" that all the shitty movies use. The scientist drops a few gummi worms into a pneumatic bank tube, then puts it inside a Slurpee machine. The Slurpee machine apparently possesses some kind of magical powers, as the movie suddenly goes into slow-motion, and remains this way for the next, oh, twelve hours or so. 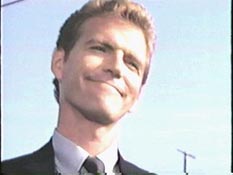 This is the head bad guy of the film in one of his more threatening moments.

However, like all good things, this enchanting scene must end, and the camera suddenly zooms out from the face of a scientist sleeping in his car, so we're to assume it was all just a dream. I pray every day that after viewing cinematic spooge like "Parasite", I will be woken up and reveal that it was all just a dream / nightmare. The pre-credit credits begin to roll, and the film continues to move along in its patented "Distort-O-Vision", which has the exciting bonus of turning normal human beings into 17 foot tall anorexic zombies (assuming Demi Moore wasn't already that in the first place). This "Distort-O-Vision" technology was just so fucking impressive, I couldn't help but run some images of "famous" Extreme Backyard Wrestling Federation members through the patented technique, just to see how they'd turn out. Take a look at the "Distort-O-Vision-O-Rama" Gallery and see what licensing this wonderful feature can do for you! Order now, before Demi Moore accosts you in the street and demands you make a movie with her, which would take place in the future / past.

The guy from the first scene (aka, "the only character in the movie up to this point") decides to drive to an abandoned cafeteria or some equally stupid location, where he beats up a couple post-apocalyptic dirtbags who want to rape a flat-chested woman. He shoots his plastic laser gun at them, and the movie goes into "Slow Motion, Warp .02" mode, which is 900% slower than the original slow motion mode, and actually has the effect of creating an "action vacuum", draining all energy from my DVD collection a few feet away. After I was done watching this movie, I put in "Enemy of the State" and found out the action vacuum had damaged this movie so bad that all Will Smith and Gene Hackman did for two hours was read poetry to each other and discuss politics in the Middle East. Somehow it still ended up being more exciting than "Parasite". Our hero kills the evil gang members by allowing a plastic snake to bite one, and shoving a piece of aluminum siding through the other guy's chest cavity.

Our hero walks off and meets some kind of 1840's prospector named "Buddy", who I'll refer to as "Pappy" from now on, because he looked like a "Pappy" to me. Pappy introduces himself to our hero, who claims his name is Paul Dean. They go in and drink some coffee, which is now worth an astronomical price, because in the post-apocalyptic wasteland, all the items we've grown to take for granted are incredibly expensive. Oh, the irony! I'm going to stop taking things for granted from now on, and every time I wake up and put on socks, I'm going to say out loud (to nobody in particular), "THANK GOD I DON'T LIVE IN A POST-APOCALYPTIC WASTELAND, WHERE THIS MEASLY PAIR OF SOCKS COULD EASILY COST ME 500 DOLLARS. SINCE CURRENCY, AS WE KNOW IT, WILL HAVE NO VALUE, I WOULD PROBABLY HAVE TO TRADE SOMETHING FOR THESE SOCKS TOO, LIKE A MUTATED, TWO HEADED DONKEY. AND I DON'T SEEM TO HAVE A TWO HEADED DONKEY AT THE MOMENT, SO WOULDN'T I JUST BE SCREWED?" Yes, I'm going to say that every morning, no matter how loudly the neighbors complain. 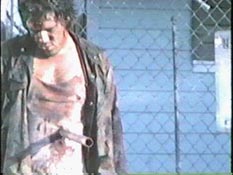 Why don't you STICK around a bit, random evil gang member! HA HA!

Paul Dean starts moaning alot, and clutches his stomach, almost to suggest he has a parasite in him. But the movie hadn't told me that, so I assumed he didn't. He decides to leave town and drive into another town named "Joshua", probably because he already killed half of the population in the last town. Paul pulls into some shanty hotel and gets a room from a lady named "Maggie" who wears a lot of makeup and talks a lot about makeup. I think the movie was attempting to convey the fact that "this lady really likes makeup". She'd make a good whore if she wasn't so God-awfully ugly. Cut to (somewhere outside), where a "futuristic" black car pulls up. You'll have to remember that the term "futuristic" actually meant "pointy" back in the early 1980's, just like "futuristic" meant "bubbly and curvy" in the 1970's. I think "futurstic" means "dirty" these days, but I'll keep you updated if it changes. A guy climbs out of the car, who we immediately know is bad because he's wearing one black glove and actually shows facial expressions (as opposed to our hero, who always looks as if he's trying to decode the human DNA sequence in his head). Dean goes to a diner and is attacked by some more "tough" gang members, who could probably get their asses kicked by any grade school marching band. The gang members then start to dance to the jukebox, and then complain about how they were forced to work in the "suburbs". Alright movie, whatever you say!

Dean leaves and shrewdly elects to inject the pulsating lump on his stomach with a needle full of some mysterious chemical. That makes him stop sweating, at least for a few minutes. Demi Moore shows up in a pseudo-girl scout outfit, and she gets into an argument with the gang members / wuss bullies, who take time out of their busy schedule of dancing and whining to push her around. They steal Dean's top secret Thermos full o' parasite and head off to their secret warehouse, where they open it up. In a shocking moment of surprise, a lump of dough shoots out and attaches itself to one of the gang member's faces. Well, it might've been his leg or his arm too, it all looked the same. The rest of the gang members are so shocked and scared and frightened that they decide to beat up Dean by kicking him in the face alot. (Somehow) he's saved by Demi Moore, although we're not really told how. I like to imagine she rode in on a broomstick and dropped exploding pumpkins on the bad guys like the Green Goblin did. That was the best part of the movie!