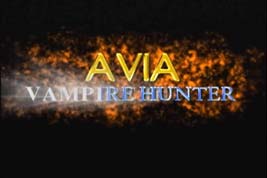 Overview: A delusional Buffy wannabe stalks vampires through the streets of suburbia, ever in pursuit of the head vampire who killed her subplot, er, family.

The Case For: Something to fill the void in the hearts of Buffy fans everywhere...

The Case Against: ...As long as those fans are blind, deaf, and extremely easily amused.

When I received the telltale red and white envelope containing Avia Vampire Hunter, my heart leapt at the prospect of seeing a badass hot chick chop bloodsucking undead monstrosities into tiny, easily manageable cubes. The envelope promised me that, "Where Buffy leaves off, Avia Richards the vampire huntress begins." Aside from the apparent confusion over gender terminology, I was psyched.

Now, I never really watched Buffy the Vampire Slayer (that noise you just heard was the sound of a million nerds crying out for my resignation in one hammy, hammy voice), but I know that it was the brainchild of Joss Whedon. He conceived of and wrote the original movie, as well as most of the series that followed. He also directed a ton of episodes, as I understand it. It was his baby. Avia Vampire Hunter is the brainchild of writer/director/producer/editor/lighting technician/cinematographer/key grip Leon Hunter. If this is his baby, then it's the poster child for abortion. This chromosome-deprived cinematic AIDS baby screams failure from the first frame. In the wild, something this unfit for life would be immediately killed by its parents. This is the world of movies, though, and Leon Hunter is the sort of proud parent that will keep beaming and taking pictures of his kid, no matter how many times it falls off the monkey bars and absently soils itself.

You know you're dealing with a guy who loves his movie when the DVD begins with three previews, all for Avia Vampire Hunter. That's the sort of thing that tends to not quite make sense the first time you hear it, so let me say it again: Leon Hunter decided to begin Avia Vampire Hunter with three separate previews for Avia Vampire Hunter. These are not special features on the DVD. These are not little promos before the menu. There is no menu. These are actual previews for the movie built right into the movie itself. The fact that there are three of suggests two possibilities. Either Mr. Hunter was so proud of the job he did on these previews that he wanted to ensure that everyone saw them, or he had a sudden attack of conscience and decided to spoil every semi-important detail of the movie from every possible angle, thus sparing the audience the need to go any further. You might hope that it's the second option, but trust me, it's good ol' number one. How do I know? Simple. No one puts their name in the opening credits nine times unless they are proud of their work. I'm convinced that he was going to call this movie Avia Vampire Slayer until he thought, "How can I make this movie just a little bit more about me?"

The credits also reveal one other key detail beside Leon Hunter's fascination with all things Leon Hunter. Most of the music in this movie is by the London Philharmonic. I'm sure it was all used with their loving consent. I know, I know, I should be glad that ol' Leon stole music rather than trying to compose some himself, thus giving him one more reason to pat himself on the back, but using music by the London Philharmonic (much of which was recorded for other movies) for Avia Vampire Hunter is like using a Lamborghini to deliver an order of Domino's Cheesy Bread. It's just a little too much for the occasion. 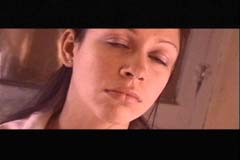 Our heroine, on heroin.In any event, the unusually classy credits come to an end, and with them, any hope of decent filmmaking. A lens flare rockets across the screen, and - bam! - we're in movietown! Things kick off with two detectives investigating a dead body in a sunny park. Within seconds of their arrival, a one hundred percent genuine, not at all fake FBI agent by the name of Avia Richards shows up to help out. Despite looking like Amy Fisher's younger sister and nearly bursting into tears when one of the detectives asks to take a close look at her badge, Avia convinces the two detectives that she is on the level. The lead detective introduces himself as Nash. The other detective doesn't get introduced at all, so I'll just call him Black Guy.

The body in question has evidently been drained of blood and suffered massive neck trauma. The detectives already have a prime suspect, a low-level hood who has a record of aggravated neck assault, I guess. The threesome head to the suspect's house for routine questioning. Neither Detective Nash nor Detective Black Guy seem to find anything odd about the fact that FBI Agent Avia carries a katana into routine questionings. They knock on the front door, accompanied by the most dramatic door-knocking music in the history of film, courtesy of the London Philharmonic. No answer. Fortunately, this serial neck brutalizer leaves the front door of his tidy suburban home unlocked, so the cops just let themselves in. Oddly enough, while the whole process of knocking on the door and jiggling the handle was underscored by tense orchestral music, there is no music at all when the detectives go in, guns drawn. 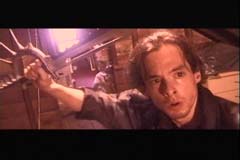 "I may not know where I am, or how I got here, but so help me God, if you don't back off, I'll drop this sword on my foot!"Passing by this nefarious killer's Titanic poster, the detectives head up into the attic in search of their suspect. They find a dopey-looking weenie guy with a huge sword, and a big, angry guy with fangs. Fangy punches Detective Nash in the head, knocking him out instantly. Before either of them can land a blow on Detective Black Guy, Avia shows up, sword drawn. She knocks out Sword Weenie with one blow, then stabs Fangy, killing him.

We then cut to Avia's house, where she explains the truth about vampires to Black Guy. Detective Nash, despite being the lead detective on the case, and once again, the only one with a name, is pretty much gone from the movie from this point on. Fangy, Avia explains, was a vampire, and it is her job to kill all vampires. She is, one might say, a vampire hunter. That's all fine and good, and I suppose it explains her stab-first-ask-questions-never approach to the big angry guy. What I don't quite understand, and what is never explained, is why she felt it necessary to punch out the weenie with the sword. He seemed to be engaged in combat with the vampire, and his badass sword would seem to indicate that he knows a thing or two about fighting the undead. One would think Avia would want him around. The only explanation I can come up with is that she didn't want anyone in this movie to have a cooler sword than her. 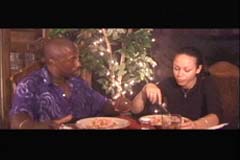 Action packed!Regardless of her weenie-punching motivations, Avia tells Black Guy how she got into this whole vampire hunting industry. Evidently she was on a family vacation to a secluded cabin in the woods, which happened to be where the big head vampire liked to hang out (she knew he was the head vampire because& shut up). The vampire killed her baby and turned her mother, father, brother, and sister into vampires. Confusing the fact that the vampire left her alone for the presence of some sort of fighting skills, she turned to vampire hunting. If you're thinking "Okay, so clearly she's going to have to face the vampiric versions of her family before she can take her vengeance on the head vampire," congratulations, you have a better sense of continuity than Leon Hunter. If you're thinking, "Meh, let's forget about that stuff and play a pointless montage underscored with some inappropriately kickass London Philharmonic jams," then you are likely Leon Hunter himself. In that case, I name thee Beast! Unclean! Unclean!

This could be a whole new genre of porn: science museum fetishism.Sure enough, it's time to cue a random, thoroughly pointless montage of Avia walking through the woods. Although she is just walking along, minding her own business, not really doing anything special, the music makes it sound like she's about to start World War III. For the record, she doesn't. Then, just as randomly and pointlessly as it began, the montage ends, and we find ourselves back at Avia's, where she is discussing her vampire hunting with Black Guy. I'm sorry, what? What was all that walking in the woods crap? Perhaps it's for the best that Leon Hunter doesn't give us the time to contemplate just what the hell that montage was all about. Instead, he distracts us with some good old-fashioned nookie. And by "good old-fashioned nookie," I mean, "Avia and Black Guy have sex with all their clothes on near a blacklight." Nothing like seeing two virtual strangers dry hump while their teeth glow Chernobyl blue. I wonder if the London Philharmonic knows any Marvin Gaye?

Laying in a still-clothed post-sex coma, Avia has a dream in which she wanders around the woods dressed in white for two minutes while nothing happens. Then, suddenly, a rake appears from off-camera! Avia wakes with a start and quickly downs what I can only assume to be anti-rake pills. That would presumably be the only thing left in a medicine cabinet after Leon "I Can Smell Music" Hunter got through with it. Suddenly, Avia is in the park, feebly practicing her swordplay, which she evidently learned by watching the pep squad twirl batons. As she slices through the air, a loop of "All Time Greatest Sword Sound Effects" plays over and over, culminating with one final, gigantic slash that makes a hyper-realistic "BWEEOOOOO!" sound. Just like in real life.