Presto, Avia is back home, saying goodbye to Black Guy. If their clothes are any indication, this is the same morning (lest I forget, this entire movie takes place in the daylight) as their passionate, clothing-required lovemaking. What sort of freaky, rake-filled timeframe is this movie working with? 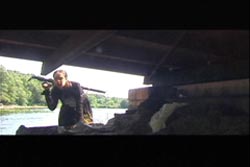 Vampire hunting at its finest.Alright, enough of this backstory, dream sequence, and romance crap! This movie is called Avia Vampire Hunter, not Avia Backstory Haver. Let's hunt some damn vampires! Avia takes to the streets of her quiet, well lit suburban town, which is evidently where vampires do their most sinister lurking. And how does this highly skilled undead hunter track her fiendish quarry? Well, uh, she pretty much just wanders around and looks under stuff, hoping that there's a vampire there. Vampires are the misplaced keys of the monster world. 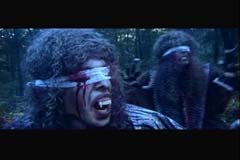 "Rrrrgh! Thag wish Thag had not poked out own eyes! Raaargh!"Eventually, Avia ends up back in the woods, which is where she is finally attacked by what I can only describe as two cave vampires. They look like blind Neanderthals with pointy teeth and sticks taped to their fingers. In fact, I'm not even sure the pointy teeth thing is a sure sign that they're vampires. I can't imagine dental hygiene was too good back in caveman times. All the same, I'm going to call them vampires, because if I don't, this movie will officially cross over the threshold from confusing to mental warfare. In any event, Avia's brilliant plan of aimlessly searching for vampires until they get bored and come looking for her leads to an epic battle of two blind vampires with sticks on their fingers versus a woman with a sword. Of course, the fight would be a lot less epic if she actually used the sword. Instead, it's a struggle for survival as she fends off their mildly annoying attacks. At last, she unsheathes her sword and kills them both with one swipe.

Avia's relationship with Black Guy continues to bloom. Leon Hunter takes us through a few of their dates/fully clothed ugly-bumpings, broken up by lengthy, overly operatic montages of Avia sitting on a dock, staring at the water in the sort of contemplative fashion accessible only to one who has lost everything that was important to them, or alternately one who is really stoned. Through their mostly inane, and often inaudible conversations, we learn that a few weeks have passed since they first met. Seriously? A few weeks? A few weeks have passed, and the only vampires we've seen since the first day have been two blind refugees from a Geico ad? What the hell, Leon Hunter?

I know black guys are into their bling, but it's just not going to happen.In any case, Avia gives Black Guy a token of her love, a gigantic heart-shaped pendant that no man would ever be caught dead wearing. It's the sort of gesture that always foreshadows terrible occurrences - the death or capture of the giver or the receiver, so that the pendant might be a token to carry on the memory and spur the survivor on to greater acts of vengeance. Naturally, in Avia Vampire Hunter, it's just a tacky pendant and will never be seen again, except for when Leon Hunter needs to stretch out the movie with flashbacks to this very scene. 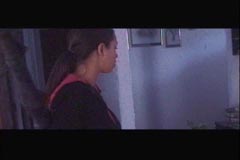 Stucco Walls of Doom!Avia doesn't actually have a means of transportation of her own, hence all the walking through the woods, so Black Guy has to drop her off at her next vampire hunting location. Once again, it's a random house in the suburbs. As Black Guy speeds off in the background, Avia encounters her most dastardly threat to date - a locked door! Fortunately, she has no problem using her sword to pick the lock. I'm not trying to be funny, here. She actually picks the lock with her sword. I'll admit this much: as far as the main character being stopped by a screen door goes, Avia does have a decently badass way of handling it. In any event, having overcome the Screen Door of Evil, Avia makes her way through the Foyer of Darkness and into the Comfortably Acquainted Split-Level Home of Perpetual Terror. There, she finds another vampire, this one sporting a skull where the upper half of his face should be. This guy would make a pretty decent Head Vampire, but instead he just lumbers around like a gorilla with Down's Syndrome until Avia kills him with one slice. 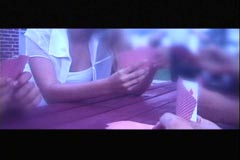 Fucking scintillating.Avia seems to be making her way through the ranks of the Mayberry undead pretty quickly, but, as we soon learn, not quickly enough! We see a group of four friends playing cards in the sunshine. That's about all, actually. It's pretty much a close-up of the cards for a good ninety seconds, before a hugely fat vampire suddenly charges at the players out of nowhere. In the next shot, they're evidently all dead. Oh, what dark forces hath Hell employed to slay this wretched foursome by way of charging fat guy?

While these new, unnamed, thoroughly pointless characters are being slaughtered by a stampeding butterchubs, Avia has yet another dream sequence. In this one, she finds herself (gasp!) wandering through the woods. This time, she sees the two cave vampires feeding on someone. When she draws closer, she sees that the person they're eating is her! Wow, so this vital glimpse into the psyche of the vampire hunter has reveal that she's afraid of being eaten by vampires. That's deep, man. Real deep.

Following her dream, Avia takes some more pills, then heads out and breaks into another quiet suburban home. This time, the place is actually occupied by a fairly normal looking family of four. Sadly, they violated the Sacred Law of the Vampire Hunter: if you leave your door open, she gets to kill you. Avia lets herself in and stabs everyone to death, presumably because they were all vampires, but possibly because she's a pill-popping psycho bitch.

Detective Nash (remember him? The guy who got punched in the head and immediately became irrelevant?) finally returns, seeking out Detective Black Guy with some vital information. Before we get to that information, though, Nash serves an even more vital purpose - he actually addresses Black Guy by name! After all this time waiting and hoping for an answer, Detective Black Guy's name turns out to be& Detective Guy. Seriously. Guy. Hey, all this time I thought I was just being casually racist, but now I can save five whole letters and still feel good about myself! 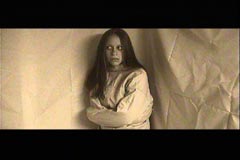 I think I might have an idea how she escaped.Nash, who has finally recovered from being punched once, tells Guy (hee hee!) that Avia is not who she claims to be. Oh, there's a shocker - the drugged-up, katana-wielding psychopath who stalks the streets of suburbia looking for vampires to gut isn't actually an FBI agent. I don't know how I didn't see that one coming. Oh, right, the meth. Anyway, Nash says that Avia is actually an escaped mental patient who was locked away for killing huge numbers of innocent people, thinking they were vampires. He even has a video tape of Avia being hauled into a padded cell. In tonight's performance, the role of Padded Cell will be played by Living Room With Large Pieces of Paper Hanging From the Ceiling. Nice.