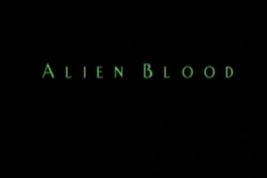 Overview: A mother and daughter who happen to be aliens evade a team of supposedly evil gunmen by ruining the lives of everyone they meet.

The Case For: Listening to all the British accents may allow you to delude yourself into thinking you have class.

The Case Against: Singlehandedly ruins Britain's credibility; a surprising lack of alien blood.

There was a time when the name Troma had positive associations in my mind. I could smile and reminisce about fine films like Toxic Avenger, Tromeo and Juliet, and Sgt. Kabukiman N.Y.P.D., all perfectly enjoyable productions from the folks at Troma. Unfortunately, this job has shown me the darker side of Troma time and again. Over and over, I've been subjected to cinematic cruelties too horrible to describe with mere words. Of course, that never stopped me from trying, and it's not going to stop me this time, either. Those assholes at Troma have squatted over the edge of my DVD player and squeezed out another lumpy, sulfurous, celluloid turd. This one goes by the name of Alien Blood, and is largely the fault of British writer/director/producer Jon Sorensen.

Like Troma, and hell, like Britain, Jon Sorensen once held a measure of respect in my eyes. He worked on the visual effects for such movies as Dark Crystal and Alien. Of course, Dark Crystal was a Jim Henson project and Alien worked off of H.R. Giger designs, so all the visual effects people really had to do for those films was follow instructions. People like Sorensen, who are accustomed to following orders from people with much, much more talent and vision, should never be left to their own devices. If they are, they will inevitably round up all of their friends (and, sadly, even their friends' kids) and slap together an incomprehensible lump of solid disappointment like Alien Blood. 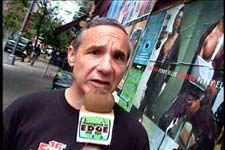 Even Lloyd doesn't look happy about this one. That can't be good.The most exciting part of this movie comes at the very beginning, when Troma's coked-up mouthpiece, the apparently unkillable Lloyd Kaufman, introduces the movie by making a strained joke about the movie's title by saying that aliens caused him to bleed from the rectum last night. Now, this movie contains aliens, spaceships, martial arts, gunfights, knife fights, and nudity, and yet - if I may reiterate - the most exciting part of this movie is when an insane Jewish man talks about bleeding from his anus. In the history of things not boding well, that rates right up there with Abraham Lincoln deciding to take a night off to enjoy a play. 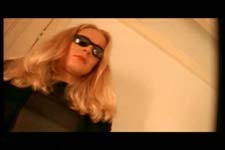 She's not just badass and pregnant. She's badass because she's pregnant.Alien Blood itself truly begins with a blonde woman standing on some rocky precipice that would look right at home in Highlander, holding the body of a child in her arms, and shrieking at the foul fate that led her to be in this movie. Suddenly, we see a blonde woman sit bolt upright in a bed in a hotel room. Is it the same blonde woman? Possibly. Unfortunately, Jon Sorensen went miles out of his way to cast people who looked completely identical to one another, then opted not to introduce any of the characters by name until nearly an hour into the movie, just to keep things simple.

Was the vision of unyielding rocks and limp-torsoed children all a dream, or something even less necessary to the plot? We may never know. What we do know, however, is that this woman is one serious ass-kickin' lady, as evidenced by the fact that she apparently sleeps fully clothed, including sunglasses and a black trenchcoat. Only the baddest of badasses are so truly badass that their jammies look like the wardrobe for the next Matrix sequel. And it's a darn good thing she's dressed the way she is, because within seconds, she finds herself fighting a nefarious agent to the death. In this movie, the role of the nefarious agent will be played by a harmless hotel bellhop. Doesn't matter, the woman beats him to death anyway. That's what he gets for trying to bring her breakfast. Having defeated the evil and very confused bellhop, the woman looks over at the other bed, and a little girl smiles back at her. So begins National Lampoon's Pointlessly Badass Vacation - I mean, Alien Blood.

A title sequence reveals that it is the morning of December 31st, 1999, the last day of the 20th Century. I could point out that December 31st, 1999 was not, in fact, the last day of anything other than the year 1999, but that would only be belaboring the point that this movie doesn't know its ass from its elbow. Believe me, the movie is perfectly capable of proving that without my help. The woman and her child - whom I will call Mom and Kid, since their names aren't really revealed until the end credits - embark on a lengthy journey through the wilderness. As appropriately epic, even operatic music plays, the two trek through woods and across rocky passes, pausing for Mom to strip enough to reveal that she is pregnant. Naturally, she does not take off the sunglasses. That wouldn't be badass. Despite having just committed homicide, Mom is evidently not in any rush, as she stops to practice her tai chi by a stream, while Kid gazes on with a half-aware, dimly content look that will remain on her face for the rest of the film. 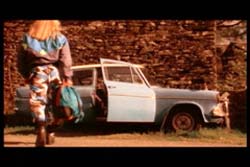 Subtlety incarnate.While Mom and Kid make their way to nowhere in particular, another mother-child duo have a parallel journey. There are some major differences between our beloved Mom and Kid and this new duo, whom I will call Second Mother and Second Kid (their actual names, according to the credits, are Second Alien Mother and Second Alien Kid, but that would be giving away too much& wait& ah, forget it). First of all, while Second Mother may be a blond woman with sunglasses, she does not have a black trenchcoat, opting instead for an inconspicuous striped windbreaker and camouflage pants that would really only help her blend in with a big pile of the same camouflage pants. Also, this little girl is a little boy, I guess.

However, before your brain starts spinning with the madness of the differences between the two duos and you climb a clocktower with a high-powered rifle of some kind (although if you do choose to go that route, please do so near Jon Sorensen), Second Mother and Second Kid show their similarity to their predecessors by inflicting some random violence on an undeserving stranger. This time, it's a farmer who's on the receiving end of a life-threatening beatdown. Second Mother and Second Kid drive their car up to a remote farm, beat the hell out of the friendly farmer without saying a word, and steal his only horse. I'm not sure why they need a horse when they have a perfectly good car, but I guess they decided they needed a way of crossing the landscape that would slow them down as much as possible.

We rejoin Mom and Kid sitting around a fire beneath a jutting rock face. Jon Sorensen went out of his way to make the time very clear throughout this movie, periodically flashing a graphic across the screen to indicate the current hour. This is how I know that it is still morning, yet we've seen both pairs of mothers and children cross night skies, bright daytime, and blazing afternoons, it is still before noon on the first day. Nonetheless, trust me when I say that the journey of these two pairs has been nothing short of epic, what with all the nature and close-ups of people looking pensively off into the distance and whatnot. So it is only appropriate that the music swells to new heights as Second Mother and Second Kid appear on their stolen horse. 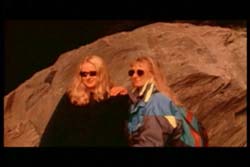 They're so happy to see each other that they're speechless. That's nice and all, but SOMEBODY SAY SOMETHING.This is it. Time for the ultimate battle of mothers. Or not. As it turns out, they're all friends. The two mothers hug and the kids sit next to one another by the fire. Then they all rub Mom's swollen belly and silently compare their clunky 1999 cell phones. Fucking epic.

It should be noted that we are now around twenty minutes into this movie, and the only dialogue (other than Lloyd Kaufman and his heinie hemorrhage) has come from the bellhop and the farmer, and has consisted primarily of "Ow," "Stop," and "Why, why am I in this movie?" Otherwise, this has basically been a twenty minute hillside interpretive dance featuring doughy blonde women and children who must be in high school by now and are probably desperately hoping that their friends don't read this website. Thus, I think you can understand my excitement when I say, hooray, a child is about to die!