George Lucas' baffling desecration of the beloved, sacred Star Wars franchise continues with The Clone Wars. This animated debacle alternately resembles fan fiction and parody, though it's completely official and serious. Somehow, it graduated without merit from "straight-to-DVD novelty" to "theatrical release."

These droids contribute wacky gags to what's become the summer of slapstick robots.The Clone Wars starts with the signature "A long time ago, in a galaxy far, far away" scrolling script, before staving off a unanimous "tl;dr" response from young viewers by letting an old-timey radio announcer narrate the rest of the nonsensical introduction. The only part of this voiceover babble that matters is that gastropod kingpin Jabba the Hutt's larval kid Rotta has been kidnapped. Given that 90 percent of the action relates to this development, the film should've been titled Saving Baby Rotta, or Rescue Hutt. Granted, the kidnapping was a strategic move related to the Clone Wars, but films usually name themselves after the specific storyline on which they're focused instead of the broader conflict. That's why Schindler's List wasn't called World War II.

The movie establishes its key elements early: Blathering expository dialogue, numbingly staged Jedi-vs.-robot battles, flickering hologram correspondence, horizontal screen wipes. This sequence repeats several dozen times, and while the order of the procession occasionally changes, the components never do. Robots miss hundreds of point-blank laser shots, their multicolored projectiles whizzing past the Jedi like harmless neon donut sprinkles. Once it's clear the good guys can't get injured, let alone killed, these scenes become monotonous and maddening, like waiting for your turn at a two-player game while the jerk hogging the controller uses an invulnerability cheat code.

Actual Ahsoka quote: "You've got that we're-in-trouble look on your face."Annakin Skywalker gets assigned to retrieve the aggressively "cute" Rotta, a manifestation of Lucas' cynical belief that even a vomit-tinted slug can move plushy toys if it's fitted with doe eyes. Annakin teams with Ahsoka, a "Girls Rule!" cliché of a protégé who looks like her head's being straddled by a disemboweled zebra. She calls her tutor "Sky Guy," in one of her many clunker quips that only register as attempted jokes when Annakin responds with an irked "very funny." However, Ahsoka does produce the movie's best unintentional laugh when she acknowledges a spinning trio of approaching enemies by blurting "oh great, rolling death balls."

Ziro The Hutt, Jabba's uncle, generates the film's second brush with inadvertent humor when he cries "run for it!" and attempts to slither away from capture. He's a flamboyant lavender lump of wet stool, decorated with feathers and slathered in blacklight paint. Ziro speaks in English, using a squishy approximation of urban patois. He sounds like a drag queen pimp, but the club he controls doesn't seem to be a gay bar, because the flaming homosexual droid C3P0 remarks "This part of town is definitely not my part of town" when he enters. 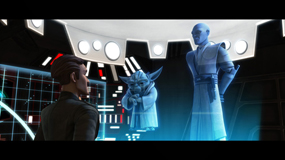 In a futuristic version of "phoning it in," celebrity actors Yoda and Samuel L. Jackson were represented by holograms.As for the recognizable characters, Yoda rolls out his usual grammatical transpositions, which, while largely tiresome, become somewhat hilarious when he's angry. ("Get past it, we must. Get past it, we will!" *Yoda's eyes narrow, his mouth clenched as if he's trying to keep the froth of rabidity from seeping between his teeth.*) Samuel L. Jackson's vocal performance as Mace Windu feels lifeless, probably because he had to sedate himself to keep from embellishing phrases like "criminal scum" with emphatic profanity. Padmé Amidala, voiced by Cat Taber (Final Fantasy XII's Penelo) rather than Natalie Portman, attracts attention during her late-movie cameo by donning an embarrassingly obscene painted-on outfit on loan from the hentai wardrobe.


The Clone Wars plays like an interminable cut scene from an ugly polygonal PSone game. It looks unbearably cheap and fake, like the CGI equivalent of those '50s science-fiction movies with model spaceships and Styrofoam planets hanging from visible strings. It's superior to the Holiday Special, which consisted largely of unsubtitled Wookie grunts and torturous musical numbers, but whereas that travesty was immediately disowned and remains commercially unavailable, The Clone Wars promises prolonged misery: It serves as an inept prequel (Lucas specializes in these) to a television show of the same name that debuts in October.