Another day, another lawsuit... The Dollpalace!

Well since it's a day ending with a "-y" and the Earth apparently still has a plentiful supply of oxygen, I think it's safe to assume that Something Awful has been threatened with yet another lawsuit from an angry Awful Link of the Day webmaster. I don't get it; these people obviously have a lot of time on their hands since they spend zero percent of their day working on their hairball crap sites, so what do they spend the rest of the day doing? It's obviously not legal research, as their paint thinner-huffing bloatbag bodies are under the impression that they can sue anybody anywhere for anything. I'm guessing it's not HTML study, as their sites look as if they were composed by pulling random tags from random Internet sites and then combining via alphabetical order on their front page. I suppose I can only assume that somewhere, in a hidden underground bunker below the world's largest toxic waste dump, all the victims of past ALoD linking gather together each weekend to brainstorm lawsuits they can throw against me by quoting key words they heard on "Matlock" or a television show that featured an old guy who vaguely resembled Matlock in the aspect that they were both vaguely humanoid-shaped. Regardless, Something Awful is under legal attack once again... but we've got a secret weapon up our collective digitally-compressed and image enhanced sleeves: Leonard "J." Crabs, ace legal guru and Army test subject (the test failed).

Please remove www.thedollpalace.com from the content of your site.

Otherwise we will contact your provider (we were unsuccessful contacting your mobile number ) and start legal actions against inappropriate content of your front page.

We are going after the following user right now. If he is the one who sent you our url, I would recommend you notify him about this.

Since I'm currently battling William F. Slater, III in a sumo-fight of legal heavyweights, I decided to pass this legal threat onto SA's legal eagle, Leonard "J." Crabs, who recently emerged from his four-month long mysterious adventure in Dead Man's Creek. I'm not exactly sure what Leonard was doing there for so long, but when he came back he handed me the keys to my car and said, "here, you won't need these for where you're going." Before I could ask the meaning of his cryptic message, Mr. Crabs had pulled "The Leonard 'J.' Crabs Legal Maneuver #492," which consisted of him vanishing in a cloud of smoke while the theme from "Mama's Family" played at a remarkably high volume. I also noticed most of my World War I collector plates were gone. Leonard promptly responded to the legal threat from www.thedollpalace.com by sending them the following letter:

Greetings. My name is Leonard "J." Crabs, the specialized attorney Something Awful Inc. hired to defend them from from legal threats, paperwork, tax filings, hydrogen mishaps, malicious lies and even more malicious slander, and any other legal difficulties which they may find themselves in during their operation of their nonprofit venture capitalist publicly-traded incorporation, Something Awful (and its subsidiaries, TransCon Chemical Storage and Global Ski Boot Depository and Hazardous Waste Storage). I was recently forwarded your email and decided to look into your claims since my current client, Jimmy "Raging Bull" DeLucia, has been found outside a Canadian checkpoint with many of his bones missing and replaced with bruises and concussions from being asleep inside a vehicle when a train hit it, causing a bullet to be lodged in his head.

> MAY 2, 2000 - CASE OF "PETE HARSHCNICH vs. eBUG APONSASTORY". Court finds that no guilt, prior to or previous following, was discovered upon examination of the resultant expectancy. Offsite linking was defined in prior constraints (and limited to cases of social engineering, twilight-ranked esbolisps, and terra-forma class situations). This linking fell well within legal bounds and the court found in favor of Leonard J. Crabs and legal wreckin' DJ crew. Defendant was awarded $5,000 in countersuits for claims of: 1) lost time, 2) mental psychiationality effronts, 3) legal bills including lunch during the court case, many of which consisted of steak and lobster and a lengthy chartered plan flight to Las Vegas which was manned by legal female escorts (defined within Nevada laws), which were definitely female escorts and if somebody tells you differently then they're lying because they were females and somebody out there is trying to tarnish my name and reputation by claming otherwise. Also, you can't believe everything you hear on the news.

> AUGUST 18, 1997 - CASE OF "MELINDA 'DOGS A PLENTY' SHREWER vs SOMETHING AWFUL APONSASTORY." Court finds no guilt, conceding factual falsehoods, responsible from aponsastory of Something Awful. Case is dismissed after opening arguments when defendant's lawyer forms a pro-mono coalition and uses legal maneuver of standard slander / libel statements, "The Scranton Strap On." Defendants are awarded counter-suit of "all the snacks eaten during the filings," which consisted primarily of Laffy Taffy and Hydrox (settled in small claims court under procedure 582-FF-192.28347 in the State of Washington court filings, cross-indexed by glandular hydrosis purposes). Defendant celebrated victory by engaging in "The Legal Dance," which caused both the plaintiff and judge to contract a serious stomach virus for six days or 30,000 miles, whichever came first.

We will be willing to hear your terms of service regarding your lawsuit so I may act accordingly and file the proper papers with whomever I'm supposed to file papers with. Probably that important looking guy in that one building by the Denny's. Please describe the transitory nature of this lawsuit and allow it to abide by State of Washington court laws (500 words or less, no passive verbs, must be CC:ed on yellow legal paper with a crestmark and waterbench stamp indicating legitimacy, cannot contain any nude pictures or reference certain nude pictures of Las Vegas escorts who looked female but were actually very convincing men in drag which was NOT part of the contract I signed). Please make sure to include a faxed copy of this lawsuit so I may turn it upside-down and read it while I am hang from nipples, suspended from the towel rack of my Ramada Inn hotel room.

I look forward to your reply.

Thank you dearly sir or madam,

In addition, Leonard "J." Crabs enclosed the following photo, an 8 by 10 glossy picture of himself which is neither 8 by 10 nor glossy. 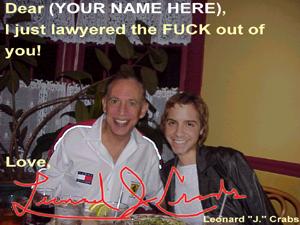 He stated, "this is the picture I hand out to all the nancyboys who I manhandle in court. It's a consolation prize for all you chump-ass plaintiffs and defendants that I cut down like neighborhood pets in my riding lawnmower. If any of you pretty boys want to make this an 8 by 10 glossy, just turn your computer monitor on the side and laminate the screen." I'm fairly sure Something Awful won the case by default, as the people from www.thedollpalace.com have not contacted me yet with any further explanation regarding how they plan to sue me for making fun of their shithole site. Well, either I won the case or Leonard stabbed them to death in their bathtub. I don't really know much about his cunning legal maneuvers, but I do know that they're cunning. And maneuvers. If there is any more progress on this remarkable lawsuit, I'll be sure to keep you all informed, which will probably lead to another lawsuit.