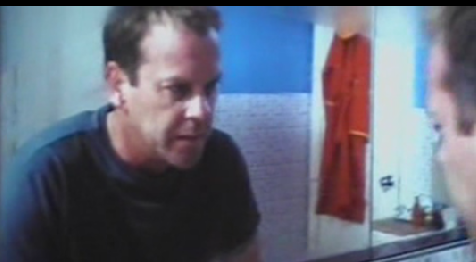 "Should I shave my head? I think I should shave my head."Mirrors, aka Jack Bauer Tries Desperately to be Bruce Willis: The Movie, is a "horror" film involving two hours of Keifer Sutherland putzing around with a flashlight in a burnt-out department store. It centers around the theme of "mirrors behaving badly," which is certainly a very original concept that has not at all been around since at least, oh, 1955! But why am I even mentioning originality? Mirrors is of course another "reimagining" of an Asian horror movie, a code word for painstakingly reproducing something scene-by-scene, only with an extra dose of white people and bad.

But it's time for another one of Raptor Red's Amazing Personal Secrets to Know and Add to Your Stalker File: I'm very high-strung. I jump at sudden movements, snap at unexpected noises, and commit acts of homicide upon "clever" nighttime pranksters. Thus, for me, Mirrors managed to be an extremely unpleasant paradox: It was a terrible horror movie that startled the shit out of me.

Don't get me wrong; nothing is genuinely frightening in this movie, and the plot goes from boring to ridiculous. But the numerous "scares" in Mirrors consist entirely of Shit Jumps Out at You While a Deaf Tourette's Patient Blasts Out a Minor Chord, and as someone who has jolted out of her skin at a lock of her own hair falling into her face, I was soon foaming at the mouth and fantasizing about taking a hatchet to the speakers. In addition to shock-inducing screechings, the soundtrack also completely over-utilized poorly-done "spooky" ambiance. Oppressively dominating every goddamn scene, it got to the point where I wondered why none of the characters realized their universe consisted entirely of samples from a Smashing Pumpkins concert held at Disneyland's Haunted Mansion.

The rest of the "terror" in Mirrors is straight-up gore, which, aside from a creative method of " 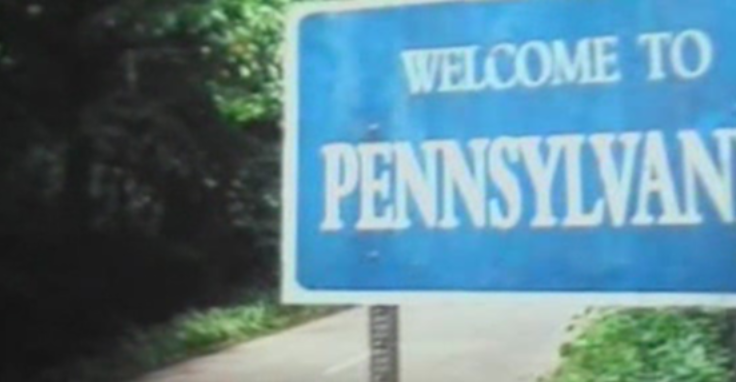 M. Night, is that you?suicide" we've all seen in the trailers, is pretty yawn-worthy. The gratuitous close-ups of gushing throats and half-melted nipples reminded me of an eleven-year-old who has just discovered cursing, thinks he has invented it, and therefore can't stop telling people how fucking hardcore he is. When they went out of their way to show forcepped-open patient in a clean, well-lit autopsy scene completely unrelated to the plot, I could only assume that the director is either eleven or gets off to this stuff. Possibly both.

Speaking of cursing, did you know that suddenly bleating four-letter words ("FUCK FUCK FUCK.") is the only way to show how desperate a situation is, aside from manly grunting and sniffing?! The script is often a laughable caricature of itself, with lines such as "I KILLED A MAN" and "WHAT DO YOU WAAAAAAAAAAANT?" appearing verbatim. While moon-behavior is nowhere near as rampant as it was in The Happening, a few situations had me scratching my head, such as "hey mirrors are killing everyone. Let's stand in a room full of mirrors for a really long time!"

The acting, too, is definitely below-average, although only the Token Child is truly terrible, and I'll forgive him because he probably lives a hellish life of drugs, lies, and rock 'n' roll. Jack's grown sister is pretty bad, too, but the most memorable Bad Acting Moment occurs when our leading man catches on fire (or imaginary space-fire, take your pick.) Instead of acting like a human, Jack assumes the fetal position, twitches vaguely, and proclaims "aaaaaaaaa. aaaaaaaaaaa. aaaaaaaaaa." in perfect monotone. The audience was cackling, and even the incessant ambiance seemed to chortle along, with Ghost Billy Corgan nearly wetting himself in glee. 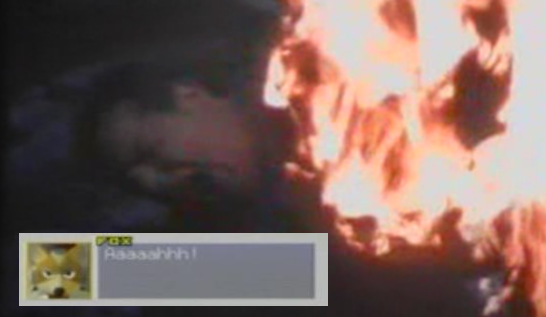 aaaaaAAAAAAAaaaaa.Is there anything good about Mirrors? Well, the special effects are fine, and I was temporarily impressed by the cinematography; the dimly-lit close-ups of charred mannequins' faces are creepy as hell. Unfortunately, these shots are beaten into the ground about twenty into the film, and won't let up for all the Windex in suburbia. Also, much like trees, mirrors are everywhere. Psst, film students: cleverly inserting something into every last shot only works if it's not referred to in every other line of dialogue.

It's this kind of lack of subtlety that takes a brick to Mirrors, with scenes that could have been spooky shattering into fireballs, gore, and bad acting. The second half segues into a whirlfuck of demons and the Quintessential Scary Little Girl, culminating in Our Hero kidnapping a nun at gunpoint and unleashing Pazuzu on humanity in order to save three chuckleheaded family members. While I may have hidden behind my notebook whenever the strings section began to tense, I was never truly felt scared; it was more like I was shielding myself from an ornery but benign streetperson wielding a rubber hammer. A good ghost story haunts, but Mirrors won't make you nervously check your reflection for anything other than blood pouring out of your ears.