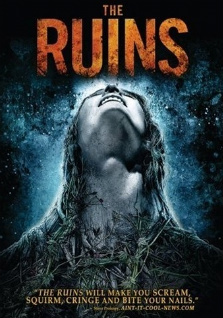 This cryptic box art offers no clues about the film's mystery villain.If you're skittish about spoilers related to new DVD release The Ruins, having studiously avoided the bestselling book on which it's based, dodged the film's brief theatrical run, and ignored the critical community's firmly posted "Beware" signs, perhaps you should stop reading now. In fact, it might be best if you abandon civilization altogether, lest someone inadvertently spill this movie's ludicrous secret. Venture deep into the jungle, where any fauna you encounter will likely be blissfully unaware of The Ruins. But if you accidentally encounter someone conversant on The Ruins, maybe someone who sought asylum from human society after their profoundly disillusioning experience with this film's idiocy, and if this fellow seems likely to reveal crucial plot points during the course of his deranged ramblings, do the honorable thing and commit suicide so your existence can remain unblemished with these revelations. Be sure to fashion a noose from sturdy vines, so you can die an ironic death.

That's right, the bad guy in The Ruins is a sentient vine. It's the kind of enemy that could work in a book, if readers were to imagine python-like vines coiling around their victims and slicing them like Suspiria's razor-wire strands. On screen, though, the vines can't compare with Evil Dead's raping tree, Poltergeist's child-swallowing branches or even the piranha plants in Super Mario Bros. They're about as threatening as the anthropomorphic weeds in gardening commercials, maybe less so for people who care about their lawns.

The Ruins found a recent cinematic companion in The Happening, which posited Trees and The Wind as co-defendants in a mass murder spree. Unfortunately, whereas M. Night Shyamalan provided (allegedly) intentional absurdist entertainment by coaching his cast to speak like dazed toddlers, Ruins director Carter Smith must have encouraged his actors to go for complete realism in their depictions of unbearable Spring Break scumfucks. 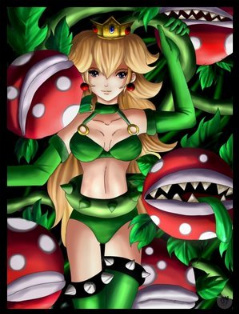 Stacy (Laura Ramsey) fights for her life against botanical predators.While vacationing in Cancun, Stacy (Laura Ramsey, who actually starred in The Real Cancun), Eric (scruffy Shawn Ashmore), Amy (Jena Malone, who greets the specter of impending death with the dubious epitaph "This is so not okay") and medical student Jeff (Jonathan Tucker, flashing a series of smug-cock expressions) take a detour from their drinking-sex-spring-break-whoo itinerary in order to help recent acquaintance Mathias find his brother Henrich. Henrich followed his new archeologist girlfriend to a dig site atop a Mayan pyramid, leaving behind a map for Mathias in case he wanted to join in the excavation fun. A taxi driver initially refuses to take them to the X-marked spot, saying "this place no good," but a modest bribe convinces him to forget his qualms about leading tourists to doom.

When the crew arrives at the ruins, they're greeted by Mayans on horseback, who shout at them in an unsubtitled language. In true Babel fashion, the multicultural communication breakdown leads to tragedy: Greek-speaking Dimitri, who can't understand his hotel-pool buddies, let alone these frothing villagers, catches an arrow to the chest and a fatal pistol blast to the head. After this abrupt execution, the Mayans force the intruders onto the mysteriously verdant pyramid, and keep vigilant watch to make sure they don't come down. It seems like the set-up for a mandatory vision quest.

Alas, the two couples and their German tag-along don't find inner peace, or even Mathias' brother. Instead, they discover a mineshaft, from which echoes a ringtone. Without testing the consistency of this long-dormant rope, they lower Mathias to investigate, only to have the threads tear. He's pulled from the pit, but his spine snaps in the process. Later, in an amputation democratically initiated by Eric's call for a "raise your hands if you want to cut off his legs" vote, Dr. Jeff bashes Mathias' numb legs until broken with a rock, severs them above the knee with a hunting knife, then cauterizes the stumps with a frying pan. It's a graphic sequence, but the fact that he can't feel anything dampens the impact. Paraplegic-torture movies don't make good business sense for several reasons, primarily the fact that even sadists can't derive much vicarious pleasure from someone carving into dead, unfeeling limbs. 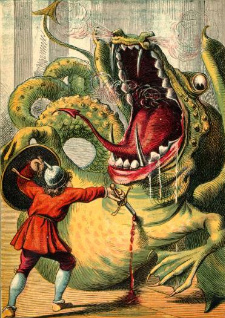 Jeff (Jonathan Tucker) faces the serpentine plant in a climactic battle. The crew's foreign-born friends are dropping fast - one dead, one paralyzed - but a fiercely entitled Jeff remains confident someone will come for the core group: "Four Americans on a vacation don't just disappear!" The next day, they confront the real monster: The killer vine! After a rogue vine tendril plants itself in Stacy's gaping knee wound, Jeff assesses that this hilltop's flora acts with malicious intent, and everyone agrees, as if vines were mankind's long-established mortal enemy. Later, infidelity accusations fly due to some vine ventriloquism, causing a breakdown in the already fragile crisis-time social dynamics. (The vine, which uses the vibrating pistils of its crimson flowers to mimic noises, also generated the earlier ringtone that lured Mathias to his fate as a broken-backed gimp.) In the book, there's plenty of discussion about the plausibility of malicious, actively scheming plants who make prank phone calls to humans when they're not mutilating them. Debates might not make for riveting viewing, but in this context the absence of incredulity seems pretty fucking ridiculous.

Horror movies fare best with believable bogeymen. Serial killers, while uncommon, do exist, and even aliens, toxic mutants and that tentacled whale-ape with spider lice from Cloverfield are vaguely imaginable. Plants just aren't scary, and that doesn't mean they work as "who would've suspected it, they seemed benign, but it was the plants killing us all along!" surprise villains, either. The Ruins might make people reconsider visiting Mayan ruins, given that the natives apparently delight in turning the drawn-out deaths of hapless jerks into festive campouts, but it won't make even easily spooked viewers fear any greenery encounters short of a bout with E.coli spinach.