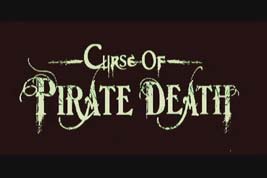 Overview: College students and professors alike try to claim a pirate's treasure for their own, which the pirate's ghost does not appreciate.

The Case For: Cameo by Ron Jeremy!

The Case Against: Officially hammers the nail in the coffin containing the corpse of pirates' former coolness, an unforgivable crime.

The Pirates of the Caribbean series breathed new life into a beloved icon, the Pirate. Long discarded as the offal of a painfully dull fanboy debate over who is cooler, a pirate or a ninja (the answer, by the way, is neither; a Viking would spank either one of them), pirates are once again on the forefront of the national consciousness. Or at least on the forefront of filmmakers' consciousness, which is generally a few trends behind. Enter Curse of Pirate Death, from Dennis Devine, who brought us Blood Mask, and starring a cast who also brought us Blood Mask, as well as Curse of Lizzie Borden. Was I a fool to try to tackle two Dennis Devine movies in such a short span of time? Of course, but this time, at least I had help. Please welcome my co-reviewer for this week, the man no prison could keep, the man no fortress could defeat, the man for whom no amount of beards is too many, Aloysius T. Vandersperm, better known as Captain Manybeard!

Before we begin, Captain, I have to ask, what would you look for in a pirate movie?

GUNS A-BLAZIN', BUCCANEERS SWINGIN' FROM THE RIGGIN', SAILS HOISTIN', CANNONS ROARIN', SWAG COLLECTIN', AND SWORDS CROSSIN'! GENTLEMEN O' FORTUNE SWILLIN' MORE GROG THAN A LONDONTOWN PUBHOPPER AND HA'IN' THEIR WAY WI' MORE BUXOM LASSES THAN A CHINESE PINKSWINDLER! SHIPS TEARIN' INTO EACH OTHER SIDE BY SIDE AND MORE BUCKLES THAN ONE MAN COULD POSSIBLY SWASH! YAH-HA-HA-HARRRRR!

I see. And what if I told you that this movie had no guns, no sails, no cannons, no whores, no ships, and, in fact, no water of any kind outside of a totally unnecessary swimming pool?

My thoughts exactly. The first sign that Dennis Devine has made yet another unforgivably foul film is right there in the title, Curse of Pirate Death. There is an unhealthy lack of articles, here. It's not, The Curse of The Pirate Death, just Curse of Pirate Death. Now, one could assume that this is a movie about someone who is cursed to die by pirates, which would be pretty cool. 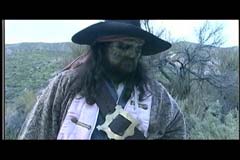 
Pirate Death refers to the nickname of a pirate who killed a lot of people, or in other words, a pirate. Evidently nobody told Dennis Devine or screenwriters Jeremiah Campbell (Curse of Lizzie Borden and its sequel, which will inevitably appear on this site) and Steve Jarvis that a nickname doesn't need to include an occupation, unless that is in itself the nickname. For instance, you could call a boxer "The Surgeon" to describe how he methodically takes his opponents apart, but you wouldn't call him "Boxer Surgeon." Calling a pirate "Pirate Death" is the equivalent of saying "William 'Athlete Fridge" Perry."

Now, you might be saying, "But Greasnin, there is a famous pirate with 'pirate' in his name! What about the Dread Pirate Roberts?" Well, the thi-

I HEARD HE BE MORE THAN ONE MAN.

Geez, spoiler alert! How about a warning next time, Captain Squidchin?

As I was saying, the thing about the Dread Pirate Roberts is that his name has the all-important "the," distinguishing him as a unique individual whose title is tied to his identity, not his occupation. You see how important an article can be?