Blue Stripe: The Life and Times of a Droid Maintenance Technician 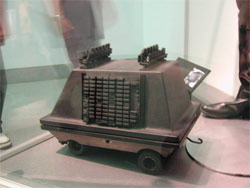 The pleasure is all yours.A long time ago in a galaxy far, far away, someone was working a job that was about 500 times more interesting than mine. I am Maintenance Specialist Second Grade Vorner, aboard the Imperial Star Destroyer Flirty Fanny. It is my great dishonor to have the indignity of repairing various and sundry droids being transported aboard this grand third line vessel of the Imperial Fleet.

This log of maintenance events and personal entries has been compiled, by me, for the pleasure of my peers on the maintenance decks and to prepare any new arrivals for the predicament in which they are now trapped. A formal log of all maintenance incidents has been recorded, in triplicate, with proper nomenclature and all of the official seals and forms. This is meant as casual reading, so if you are an officer with a Tatooine sand flea up your shorts then you can turn this off right now and go take a wet one up a gantry chain.

For those still reading, prepare yourselves for an unfiltered glimpse of pure human misery unrivaled throughout the galaxy. Although the gun crews and those guys working construction on the "super secret" Death Star might disagree, there is truly no job worse than droid maintenance.

ISD Flirty Fanny on a mission to interdict smugglers.We have just left orbital dock above Coruscant and I hear through the grapevine that we're heading out for a tour of Corellia and some old fashioned smuggler hunting. Yes, I work for the evil Empire. Ooooh scary, Sith Lords and all that crap. I've heard it all before, hippie. Once you've seen it from the inside, the Empire is about as scary as an Ewok in a wheelchair. People think we're all about big spaceships, swarms of fighters, magical lightning, laser blasts and whatever else.

Don't believe the hype. The Empire was built on bureaucracy. I have to fill out paperwork to do anything. It takes nine pages to use a lathe in the machine room and four just to take a smoke break. I have to sign three forms to go to bed. To go to bed! Oh yes, this tour will be fraught with peril and buzzing with that special sort of excitement that you can only get from being forced to submit a form to the binding department because it's so thick. Life in the Empire is truly a blessing.

Speaking of the Empire, today also happens to mark my 25th anniversary as a member of the Imperial Fleet. Every single horrible year of service has been aboard the Flirty Fanny, formerly known as Yoda's Wrath during her Clone War days. Back in those days, before Flirty Fanny was overhauled and upgraded (more like sideways-graded) to a half-assed ISD, she was an Acclamator class assault ship ferrying around those god awful clones for the Jedis. As bad as the Empire is, working with the Jedis was at least twice as bad.

They always talked in these soothing voices about the Force. "The Force is in everything, my young friend." Hey, look pal, just because you've got 500 billion midichlorians or whatever in your cells don't mean the world is full of magic. Sometimes a guy just wants a snack cake out of the vending machine without worrying about What Would Yoda Do. There was also no possible way to lie to those bastards, even if you were just trying to be polite. I remember we had this one blue Jedi chick as our commanding officer during our transport drops on Yavin 4. I was fixing an old R1 unit and she saunters over in some incredibly hideous costume that only a Jedi could get away with. She asks me "do I look fat in this?" and I say "no" but the whole time I'm thinking "unless by 'fat' you mean 'retarded,' because you look that."

Long story short, I got to find out that we have sewage droids. Like most droids I don't think they did anything, other than bounce around and hoot inside the ship's septic system, but I became intimately familiar with them. God, I was so glad when she got 66'd. Zapow! I wanted to high five those clones, but, well, don't get me started on those guys either. Storm troopers seem like frigging stand up comedians compared to the original clones.

Anyway, I'm getting off-track on this one. We're underway for the Corellian System and this trip promises to be as fun-filled as all of the others. 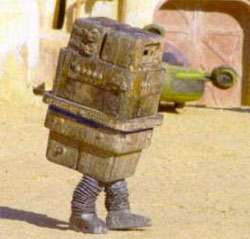 "Gonk."The first thing you should be asking is "what the hell is an EG-6 Unit?!" I didn't know either; I had to look it up in Tobin's Droid Guide. It turns out the EG-6 is a "semi-autonomous bipedal assistant." Sounds greats, right? As near as I can tell from the specifications and capabilities charts in Tobin's the EG-6 can walk slowly and say "gonk" over and over. It has no arms, no sensors, no useful speech capability, no weapons and no tools. It doesn't even have any compartments or drink holders, although I guess when it's not walking around slowly you could set a couple glasses on its top.

The next obvious question is "how would you even know it's broken?" As it turns out, the ever-humorless Lieutenant Spurskman thought this question to be an insult and demanded to know when I would be repairing his EG-6 Unit. I went to his quarters and found the EG-6 somewhat mobile, but no longer repeating "gonk" as it shambled around the room knocking things off shelves. I replaced its audio transmitter unit and, after a thorough dressing-down by Spurskman, modified and installed a second audio transmitter to intermittently play "kill the captain" during sleep cycle at a whisper volume.

We can only hope that the EG-6 unit succeeds in its latest task. 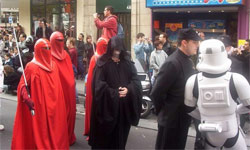 Hard-learned lesson #54: never walk in front of the Emperor.Because the Flirty Fanny is a retrofit rather than a true ISD, it only has about half the light speed range. That means twice the number of refueling layovers. Under normal circumstances this is a blessing, as virtually any rotting space station or fuel depot in the galaxy has better accommodations than the rusting hulk of the Flirty Fanny. Today we had a refuel and re-supply stop in the Byss system. Unfortunately, leave passes were cancelled before the docking clamps had attached. We had a VIP coming aboard, and not just any VIP, the worst VIP of all time: the Emperor.

On a scow like the Flirty Fanny I have had the good fortune to be spared visits from the guy, but today just wasn't our lucky day. No one likes it when the Emperor visits. No one. Vader is a special needs case with a reputation for choking bridge officers, but he's nothing compared to the Emperor. Here are some of the incomparably retarded things we had to put up with today:

After the Emperor departed with his creepy red bodyguards we held a brief service for the nine crewmembers he had electrocuted, then we undocked and continued on our way. 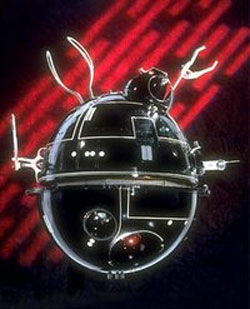 I hope you didn't actually need that uterus of yours.If Vader were visiting right now I would be sooooo choked. Yesterday morning, Major Luxxa from ground forces command asked me to do some special modifications on an IT-0 droid for him. I didn't ask him where he got the droid, but Major Luxxa was all too open about what he intended to do with it. He liked to play "interrogate the rebel" with a saucy little minx from intercept and decryption. A real hot number by the name of Lieutenant Dorets. Way out of my league. Anyway, he wanted me to strip all the cutters and injectors off the IT-0 and replace them with various, well, stimulators. He wanted me to leave the electroshock units in place, just toned down a little bit.

I would normally tell an officer to stuff a request like that, but Luxxa is a decent sort and I admit I kind of liked the idea of my handiwork pumping Lieutenant Dorets for information. I agreed to do the work. Luxxa said he'd come in after hours and pick up the IT-0 if I left it on my desk. Well, I did leave it on my desk, unfortunately I never had a chance to make the modifications because a litter of mouse droids got caught in a ventilation shaft. Luxxa tells me that both he and Dorets had to spend an hour in a bacta tank just to patch the holes and his left hand still hasn't fully grown back. I'm just lucky Dorets is the forgiving type or I'd probably be detailing Luxxa's AT-ST walker for the next month. 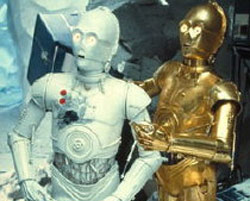 Ruining a perfectly nice day for a, white weddddinnnng!I make no effort to hide my hatred for protocol droids. They're vain babbling ninnies whose only use, as far as I can see, is annoying their owners in more than a million languages. Nevertheless, a lot of the officers aboard Flirty Fanny think protocol droids are wonderful and, as a result, I'm constantly plagued by six or seven of the things needing minor repairs. Imagine my surprise when I returned from sleep cycle to find two 3PO units practically panting with excitement. A "C" model and a "K" model had somehow negotiated an exceedingly elaborate and effete wedding agreement.

I initially dismissed the two droids, but their nagging persisted and I was forced to shut them down when they ignored my threats of violence. When the owner of the "C" unit arrived to pick up his droid, I activated the C-3PO and it immediately switched on the "K" model. The K-3PO bore a gaping stab wound where its owner, enraged at its behavior, had justifiably thrust a sharpened iron rod. When it became apparent to me that the 3PO units would not be separated and would not relent in their demands for a wedding, I agreed to officiate a wedding ceremony. All of the operational droids in maintenance were in attendance. A solemn monotone hymn of "gonk" was sung by the audience (it was the only song all of the droids knew) and then the bride and groom marched down the aisle. It was a brief ceremony, with a few touching words by myself and a long-winded exchange of vows that was cut short by discharging a pistol into the ceiling.

As the happy couple made there way back down the aisle/parts corridor, my assistant tugged the lever I had instructed. Immediately, a 600 kilo degaussing magnet dropped from the ceiling and struck both bride and groom in the torso. Some minor mechanical damage was sustained by the two droids, but the real goal had been achieved: total memory wipe. As I propped the brain-dead droids against a cabinet, I believe I may have detected a slightly sad "gonk" coming from the malfunctioning EG-6 unit.

I have hundreds more boring tales I could relate to you. To summarize the events of the tour itself: we flew out to Corellia, we ran some patrol circuits looking for pirates, we chased a comet mistakenly believing it was a smuggler, we gave up in finding a smuggler or pirate and returned to Coruscant for repairs to the damage sustained when we chased the comet through a dense asteroid field. Other than the 9 people killed by the Emperor, no casualties were sustained and only two relationships were directly destroyed by my actions.