Ian "ProfessorClumsy" Maddison dons his 3D glasses and his dancing shoes this week in an attempt to fit in with the cool kids. Either he's out of touch or something in Step Up 3D just doesn't work right.

EXPECTATIONS: I have never seen a Step Up film, so I don't really know what to expect from the third installment beyond a lot of dancing and 3D gimmicks. I have enjoyed films based around dancing in the past, like Footloose and Dirty Dancing, so I guess there is that outside chance that Step Up 3D will have some of the charm and raw, natural talent displayed in those films. On the other hand, it could just be a lot of dancing and 3D gimmicks.

REALITY: Every now and then you will find yourself leaving a cinema with only one word in mind that could possibly describe what you have just seen. Sometimes it is a positive word, like when I left The A-Team thinking "Yippee!"; sometimes it is a negative word, like when I left Clash of the Titans with only the word "Misogyny" in mind. In the case of Step Up 3D, I could barely form a word in my mind at all, beyond one elongated groan.

The film begins with Luke (Rick Malambri), the self-important leader of a dance troupe known as The Pirates, showing us all how much of a beautiful and unique snowflake he is because he carries a camcorder and leads a dance troupe called The Pirates. This Luke fellow teams up with Moose (Adam G. Sevani) after Moose accidentally gets into a dance battle with a member of the Samurais, who are described as the most cut-throat group of dancers in New York. Moose actually manages to win this dance battle by popping bubbles and letting balloons fly away in 3D, which makes the police chase him for some reason. Apparently letting balloons go is some kind of major offence in New York?

Things get increasingly the same when the Samurais, now out for dancing vengeance, corner Moose in a public lavatory and won't let him leave until he dances with them. I assume this is normal behaviour for people interested in dancing and not one of the most contrived excuses for a dance scene in the history of cinema. While this is happening, Luke is busy falling in love with Natalie (Sharny Vinson) because she dances well, I guess. The three are brought together, along with the rest of The Pirates, to compete in a dancing World Jam, which is some kind of weird series of underground dancing events that would probably be less spectacular, yet more popular, in real life.

In a film like this, we all go in expecting a spectacle first and foremost and can usually expect a somewhat slack story to tie it together. But there's a line that gets crossed occasionally where the spectacle and the story just don't tie together at all. The very concept of cut-throat dancing battles is so ludicrous that I couldn't even pretend to accept it on any level. Very often, for the sake of spectacle, a character will behave in a hugely irrational manner. Luke is particularly difficult to relate to because he constantly makes demands of Moose even though he knows he has other obligations. At one point, he even forces Moose to not go on a date with the girl he loves because, guess what, Luke wants to run off and see Natalie. Why he even needed Moose to go with him is beyond me. Just an example of how convinced that prick is of his own self worth. 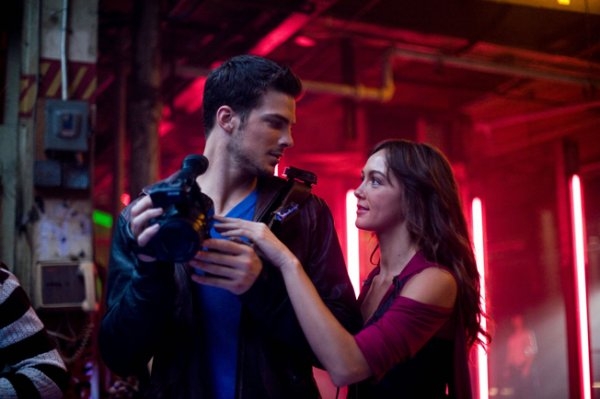 Don't ever touch my camera, it is the window to my precious unbound spirit.

Another thing that baffled me entirely is a pre-occupation with shoes that would make the Sex & The City girls blush. Moose stumbles into his first dance battle because he wants to get a closer look at some gunmetal Nike super-pumps, or whatever he calls them. He then continues to covet these divine relics until SPOILERS: he gets a pair of his own at the end. Do we care? No, they're just fucking shoes.

And when we're not obsessing over shoes, we are stealing hats. In one scene, which I think is supposed to be romantic, Moose and his girlfriend dance through the streets, causing mischief and mayhem around them. During this dance, Moose steals a man's hat and keeps it. The man does not do what any other man would do, which is to walk over to the skinny kid who stole his hat and pummel him into the dirt for his effrontery. Instead this man shakes his head and continues his conversation, offering only the vaguest protest of "Hey, give me my hat back..." It's distracting, because I want to like the main characters in this kind of story, but he's just a dirty hat thief. Between Moose's hat-thievery and Luke's self-obsession, there really isn't any kind of emotional hook here. Even Natalie is a character who exists only to reinforce how special Luke is to himself, by both hurting and then healing his supposedly beautiful soul. 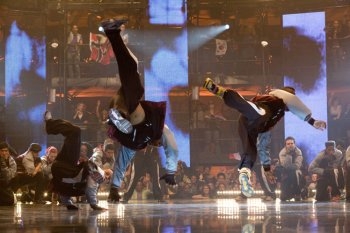 This is why you put up warning signs if the floor is slippery.The actual spectacle itself ranges from the genuinely impressive to the downright annoying. A lot of the dance routines are very well performed and choreographed, though you never get the impression that these people have any kind of physical limit. After ten solid minutes of pretty extreme dancing, I'd expect even the fittest person to be breaking a sweat. Not these guys, their hair remains pristine and their clothes dry throughout every routine, which kind of defeats the purpose of focusing the action around competitions. There's no tension involved at any point because nobody ever gives the impression that what they're doing is even slightly difficult, which it actually is.

What's worse is that the third act is the climactic dance battle between the Pirates and the Samurais, which ends in an elaborate routine involving light-suits and special effects that just left me wondering why the hell they didn't just open with that. It's not like the film is short of dance scenes up until that point. Also irritating is the fact that one member of the Pirates appears to be a robot. Like he specialises only in robot dancing, but he also acts like a robot when doing mundane tasks like sweeping the floor. The only logical conclusion is that they have an actual android among their ranks, which is surely against the rules for a dance competition?

I can't decide if Step Up 3D is an exploration of the nature of modern man, who is now essentially woman but with a penis, which means he still does everything better than woman, such as dancing; or if it's just another "believe in yourself" ballad in movie form that leaves grown men feeling bilious. I'm inclined to believe the latter, or, even less, perhaps this is just an excuse to see some people dance. If you want to see people dance, then I can assure you that you will see lots of people dance a lot in this film. The problem is that they tried to ground it in some sort of reality that is only very thinly veiled, leaving a feeling of inconsistency in the tone of the film. If this were a story about super-dancing cyborg aliens sent to Earth to end a galactic war by out-dancing each other and featured all of the exact same dance routines, it would be fantastic fun. As it is, it just doesn't work.

MINORITY REPORT: I don't care what you say, I think Luke is dreamy. He's like a younger Ashton Kutcher who dances like a demon. You just don't understand his tortured, beautiful nature! -a teenage girl