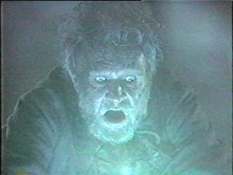 Some homeless man discovers a box containing the Unreal engine.

Like many high class science fiction films, "Dark Breed" starts off by featuring a bunch of people running through the hallways of a boiler room. You see, according to these crappy sci-fi films, every futuristic spaceship is made up of about a zillion water pipes. I don't really understand how a ship that's powered by steam and made up of solid concrete can perform any practical functions, but apparently they're quite necessary. Maybe in the future NASA exclusively builds orbiting junior highschool basements, I don't know.

Anyway, Jack Scalia (or maybe it wasn't Jack Scalia, it was hard to tell with all the flashing lights and drainage pipes and everything) is running around the YMCA's basement while people scream and fall over. Some of them shout before they fall over too. Those are probably the "experienced actors". Soon after this exciting footage of God knows what ends, a spaceship flies over the heads of a couple teenagers who are inexplicably making out in an industrial park, and crashes into a lake. It sure does make a huge splash for a child's model. Soon after that, some mysterious branch of the military shows up and starts running around for no reason. Music with a lot of drums plays in the background so we can be sure it's really a military operation and all. Turns out the spaceship that flew into the lake was named "Aquarius 7" and was some kind of top secret governmental science project made to study... uh... science. There were six astronauts aboard the spaceship including - and get ready for the big super surprise here - Scalia's ex-wife! WOW! It's an entire family of ultra elite space astronaut government spy scientist rocket smarty man surgeons superheroes!

The astronauts rise from the water and promptly begin beating people up and staring into the camera. They run into some nearby warehouse and begin talking in scary voices about a reentry canister they're looking for. The movie lets us know that they're evil aliens because they have real deep voices and their eyes are yellow. Oh yeah, and their skin is kind of scaly too. I think one of the army guys also said that they were infested with aliens as well. Regardless, the movie makes it extra clear that they ain't just normal human beings. You know, because they're now ABNORMAL alien-human beings, and this is scary. 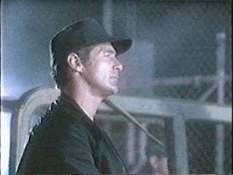 Jack Scalia pauses and wonders how he can ever top the role of playing Joey Buttafuoco.

For no readily apparent reason, the alien astronauts decide to leave and stand in front of traffic in the middle of a highway. They get some guy pulling a mobile home to pull over and they hijack his truck and drive off. Aliens obviously prefer the stylish comfort of a mobile home of something less stupid like a broken down Yugo with peace signs and "GRRL Power!" painted all over it. Nick (Jack Scalia) ties himself to a rope hanging off a helicopter and is dropped onto the mobile home. This is the first of many exciting stunts Scalia performs, including such exciting things as jumping and sitting down. They fight and eventually end up causing the entire mobile home to explode roughly 20 times. You see, when objects explode in this movie, they explode over and over and over again, from hundreds of different camera angles. The director was obviously very proud of the fact that something blew up in his film, and he really wants us to appreciate it as well. I know I did!

Enough excitement, back to the warehouse. Some bum finds the magical "reentry capsule" that fell from space, and immediate sticks his idiot face inside it. The capsule is full of a Daikatana-esque object which is covered in snot and spooky green mucous. The bum (of course) gets blasted by the alien fungus. Duh.

Nick returns to the top secret OMEGA Headquarters, which is actually some kind of fancy mall. His boss reveals what we basically already knew: Aquarius was a vaguely top secret mission that was supposed to study alien parasites, but they got infected and crashed into Earth (coincidentally where the movie is taking place). The director tells Nick all these top secret things in the middle of the terrace, right in the open in front of everybody. No wonder their stupid little space mission got all fucked up.

Nick and a couple other secret OMEGA people get into their secret OMEGA high-tech van (it has a bunch of blinking lights and frequently makes beeping sounds) and they drive to another industrial park so Nick can have another flashback of running around in the basement of junior high schools. Turns out Nick has fought these nefarious aliens before and watched his crew get slaughtered by them, so this time IT'S PERSONAL! Nick's blurry flashback is interrupted when a bum appears and asks for something to eat. Nick gives him a sandwich. This is because he's nice.

Soon the aliens discover the secret warehouse that has their alien Pod of Doom (TM) lodged inside it. A few hundred soldiers from OMEGA show up and shoot at the five aliens, but manage to never hit them because they have even worse aim than the bad guys from Contra. They're so pathetic that they can't even shoot an alien when he's climbing up a straight ladder at about two inches per second. They get tired of missing whatever they aim for so they get some guy with a nuclear rocket launcher to come in and start blowing shit up. The aliens eventually all leave because I guess they got bored of NOT being shot.

The evil Joseph Shay (I think the bad guy was named Joseph Shay, I just called him "General Nogoodnik"), who is the mastermind behind the evil OMEGA group, kidnaps Nick's doctor friend who saw one of the aliens inside the astronauts. He's real mean and slaps her. This is because he's the bad guy. Nick storms in and punches a few people and then forces General Nogoodnik to reveal the entire plot of the movie in less than a minute. Turns out OMEGA wanted to - get ready to be shocked here - use the alien parasites to study and make ultra weapons of destruction for the government! How surprising! Nick and the doctor leave after she says, "you'll never get away with this!" When somebody goes after Nick to shoot him, General Nogoodnik responds with, "let him go." Why? Who knows.

Meanwhile, the aliens have turned the warehouse with the Pod of Doom into a real mess. Sloppy rooms are supposed to be scary.