How to Convince Your Loved Ones to Support the Protests

The revolution may not be televised, but it sure is being live-streamed everywhere. I was going to write about the depression stage of dealing with Covid, but it seems that we’ve all collectively decided to circle back to the anger stage. Fine! We’ll pull a Back to the Future in terms of emotional healing.

However, on our return trip through the five stages of grief, a bunch of people got stuck up in the denial phase. I can understand that: Charmin straight up assuring the public that they can continue their ridiculous toilet-paper-buying frenzy unabated broke me for a few solid days. If you have friends or family that are normally rational, but are now talking like these mass protests aren’t, like, the most greatest thing ever, here are some tricks I’ve been finding successful.

Tip #1: Show Them the Live-Streams

First and foremost, start going here after ~2 PM PST, every day: www.twitch.tv/woke. You should see something like this. 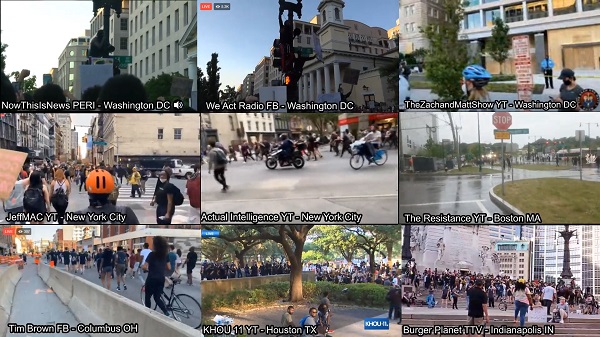 It’s like the Brady Bunch intro... if Mike and Carol Brady had spawned
hundreds of children and crowded them together in six different cities.

This is the most popular source for curating live streams of people walking around the protests. You get to see what’s happening unedited and unfiltered. Please Note: If you go to this feed too early you get streams of people playing video games. Don’t panic: I’m organizing violent protests against that after this current state of affairs resolves.

Seeing an unmoderated feed is critical: Peaceful protests don’t get clicks for mainstream news sites. Riots and looting get hits. So people who are getting their riot news anywhere but straight from the source tend to think there’s way more looting. They also miss out on wonderful protesting moments like the one I’m calling Terrace Hill Trash Night.

In Des Moines, protestors took to the Governor’s mansion on Terrace Hill. After being pushed down the steps and across the street by tear gas, the demonstrators lined up on the sidewalk chanting. At one point, someone threw a trash can at the police line, which fell short and spewed trash everywhere. There was a pause, then someone yelled “pick it up!” Soon, people are shouting at the trash thrower to go pick it all up. They sheepishly go into the street and pull the can upright, the crowd jumps in and picks up all the loose trash, putting it neatly back in the can. This wasn’t covered on any news website, I can’t even find the footage. But it happened, it was adorable, and I laughed.

Using these live streams as your medium to the protests, and sharing it with as many people as possible is the greatest thing you can do to help the cause of exposing police brutality. Well, I guess protesting is the greatest thing you can do. But sharing live streams is the second best- no, there’s donating money, that’s more useful, too. I will set my official ranks of how important I think everything is later and get back to you.

I’ve watched tons of hours of protests. I’ve pretty much had streams for at least 6 cities running 10 hours per day. My interior monologue now comes out in a series of rhyming chants. So far, I’ve seen looting at about one-fifth of the protests and they all fit a very non-alarming profile: They occur away from the main protest, they feature no protesters (no one holding signs, looting in packs of mask-wearing college kids, etc.), they are never stopped by police, and people love looting Starbucks for no reason that I can possibly come up with.

I’ve seen packs of protesters defend stores, but I haven’t seen one police officer at a looting, one tear gas grenade lobbed inside a broken shop window. Not one in my now hundreds of hours watching protest feeds. So, not only looting is not happening anywhere near as often as it appears in the headlines, the headlines like, “Looting threatens police” links together two elements that, as far as I’ve seen, haven’t even appeared on the same street at the same time. 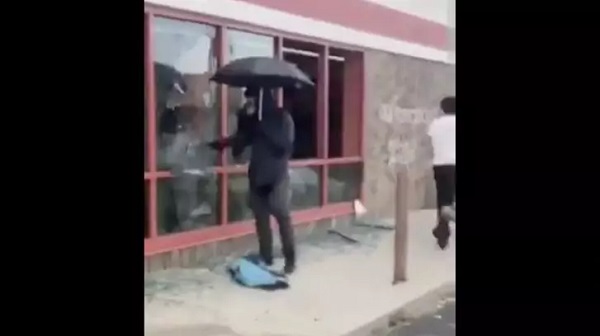 Oh, wait, except when police are suspected of instigating the looting.
So I guess I was wrong and it’s even worse than my acidic take, hooray.

A misleading “common sense” argument seems to hold up a lot of my friends from getting why these protests are necessary. Dismantling this argument with reason is usually enough to get them on board. Here are the most common platitudes I’ve heard:

Tear gas and rubber bullets are not police brutality: If they didn’t want to get sprayed, they shouldn’t have been out after curfew.

Response: “So, you’re saying that if demonstrators followed the rules, they wouldn’t be attacked by police… at a protest over people following the rules and still being attacked by police?” Be sure to go up an octave at that last word. Extend the final syllable while turning to give them the side-eye. Some people respond to logic, others to emotion, so work both angles at once.

If you yell and swear at police over and over, don’t be surprised if they attack you.

Response: “Yes, you should be surprised! Do you attack every cursing homeless person you pass on the way to work? No, not after that one time! You ignore them and move on." A major point of these protests is to show that police aren’t trained in any form of crowd management in between, “standing there,” and, “unloading a cloud of nerve gas so thick you’d expect K.I.S.S. to pop out and start rocking in it.”

Every protester is actually being paid by George Soros and are part of an anti-republican-president agenda and also George Soros is a lizard person, but not one of the good ones.

Response: “The fallacy with this is- Oh, my, would you look at the time.”

If you’re not getting through to people you otherwise get along with, just encourage them to watch the live streams of the protests, and move on. For all we know, those people could just be otherwise perfectly rational people who are just Having a Weird One in terms of moving on from the grief stage. In fact, that’s a great way to frame it for your own mental sanity: They just need a lot more time to come to terms with the significance of everything that has been happening, this year.

You can’t let yourself get impulsively worked up about the protests. Because once the protests are done, you’re going to have to not get worked up about Covid, then once that’s passed you’re going to have to stay calm about the economy. Then the election. It’s a Russian nesting doll, except all of the dolls are peaceful Buddhas but they all have increasingly red faces and an uncontrollable eyeball twitch.