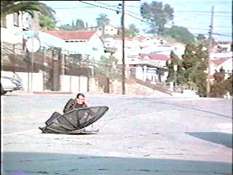 Scalia tries to sled down the street in a metal dish. What a nut!Nick goes to some random diner the next morning and is met by the female Victoria's Secret model / astronaut / alien, who pulls a gun on him and then orders a pizza. The waitress informs her that since it's breakfast, they don't serve pizza. The next 30 minutes revolves around them arguing over the menu and ordering food. It was all so very exciting and reminded me of the time I actually went to a restaurant and ordered food! Just like the movie stars! Anyway, the hot alien reveals that she's actually a good and nice parasite who infested Nick's ex-wife so they could defeat the bad and evil aliens that infested the other astronauts. They only have 39 hours until the bad aliens hatch and rule the world. I'm not exactly sure how they would go about doing this, but we're just supposed to fixate on the fact that they only have 39 hours left until something awful happens.

Nick and the hot alien / ex wife astronaut go to a motel and get shot at in plain view by OMEGA people who obviously figured that killing them in broad daylight would be much more effective than shooting them inside their underground base. Nick and crew escape by walking out the back door and driving away. A terribly exciting car chase ensues, ending with a bunch of exciting vehicles exploding repeatedly from different exciting camera angles. Oh yeah, Nick rides a satellite dish too. Don't ask.

They go to an abandoned church and the OMEGA people shoot rockets at them, causing a tiny model of a church to explode repeatedly. From different angles. Somebody with a rocket launcher tracks down Nick and makes objects around him blow up as well. From new and exotic angles. This makes Nick jump into the air. Oh yeah, the floors are covered with water in every scene too. I couldn't really figure out why this was. I guess it's just one of those "crappy ass movie" things, such as steam coming out of every single pipe and burning trash cans littering alleyways. The bad guys show up, metamorphosize into alien / predator ripoff clones, and kill all the incompetent OMEGA soldiers who were busy shooting at walls, light fixtures, and air molecules. The evil aliens also kill Nick's doctor friend who I forgot even existed up to this point. Nick disarms the alien Pod of Doom and blows them all up several times. It was all so very exciting and... exciting. Random things continue to explode in the background while Nick jumps towards the camera in slow motion. Nick makes a joke with his now alien-free wife (the alien that possessed her just kind of floats away) and they walk away into obscurity. The credits roll towards the top of the screen, and they're all in an exciting font.

So have you realized you've seen this movie hundreds of times yet? If you've ever seen a single science fiction film before, chances are you've basically watched "Dark Breed", a ball of tightly woven clichés and halfassed ripoffs. It's a trip through the tedious, a romp across the retarded, a boatride through boringness. Check this film out only if you like seeing shit blow up or if you'd like to have some evidence to present Jack Scalia when you're doing an intervention demanding that he stop making crappy films. He'll thank you for it later.