Overview: A spaceship the size of a Greyhound toilet and her skeleton crew of intrepid space Nazis led by that British guy who narrated Winnie the Pooh attempt to die in a black hole with the help of mysterious hardened convict/gypsy ace navigator Tarzan, who likes his past the way he likes his planets: Dark.

The Case For: It's dark, and we're pretty sure there's at least one planet involved, so it's honest. 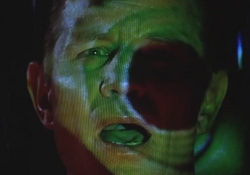 Ah, 1997. Remember 1997? We do. It was a pretty goddamn good year for movies. Even overlooking the seemingly endless procession of Oscar-caliber heavy-hitters like L.A. Confidential, Boogie Nights, Good Will Hunting, Donnie Brasco, Batman & Robin, etc., the competition was about as stiff as it gets without prosthetics involved. In sci-fi alone you had wry visual effects bonanzas like The Fifth Element and Starship Troopers, blockbusters like Men in Black; and dwarfing them all in sheer scale, budget, and Billy Zane content was Titanic, which, though unwatchably terrible, grossed something like $2 billion worldwide and caused more awkward teen sex to happen than any other event in human history.

This is the world into which the claustrophobic, wooden, nightmarish little ball of suffering that is Dark Planet was born.

Like any action-packed sci-fi adventure movie, Dark Planet likes to show off at every opportunity with fancy spaceship dogfights and outlandishly fantastical future tech like steam, Roombas and CRT monitors with words on them (to name a few). Unlike most sci-fi movies, the special effects here look like they were made by somebody who has never seen a movie, a camera, or light in general before:

And since it's been a whole two paragraphs, let's just go back and dwell on the fact that this movie was made in 1997. 1 9 9 7. Nineteen-fucking-ninety-seven. The special effects are so disastrously bad that we had to double-check to make sure the release date wasn't just a typo of 1979. Not that this would stack up particularly well with Alien, Star Trek or Moonraker either, but it would at least be more of a David vs. Goliath instead of David vs. an Oncoming Freight Train Made of Plutonium And Also On Fire.

Even ignoring the special effects, assuming that was humanly possible, there's plenty of failure to go around in Dark Planet. The vast majority of the cast haven't made it to the "moving and talking at the same time" part of their acting school curriculum yet. The plot is some ridiculous Cold War-inspired atomic hyperbullshit about two superpowers reluctantly coming together to avoid mutual destruction (remember: 1997.) But we're going to go ahead and give the gold star of shame to director Albert Magnoli. We have no idea/don't care who the hell he is or where he's from, but man we just bet he's one of those people whose name is pronounced "Al-bare," so you know what? Fuck you Albert. Al-BERT. T. TUH. How does it feel to end in a consonant, you son of a bitch?

Great, somebody's been pushing her buttons again, time for another mandatory sensitivity seminar.

Alber-T really goes above and beyond the call of duty here in order to put on a clinic on how not to make a film. Seriously, if you're an aspiring director, just save the money on film school and watch Dark Planet a few times instead, do the opposite of everything, and you'll be golden. Movie-making decisions you will learn to instinctually avoid like a lab rat in an electrified maze include, but are not limited to:

3) Constant extreme closeups of people sitting quietly, alone, not thinking or doing anything

Of course we're just focusing on the negatives here, there are definitely some good qualities, like...uh...well, the camera is usually pretty steady, and nobody's head gets accidentally cut out of shots in every scene. Dark Planet: made by satisfactorily competent cameramen. There's a tagline that'll pack the theaters. Note: the actual tagline is "One final step for mankind" - we still haven't decided which one's worse.