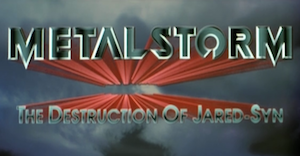 Overview: You know that game Desert Bus that Penn & Teller made just to fuck with people's heads, where all you do is drive back and forth between Vegas and the California desert in real-time over and over and over and nothing ever happens? This is the movie version of that.

The Case For: Was filmed and distributed in 3-D, which makes it a great reference if you ever forget what a metric shitload of sand looks like in three dimensions.

The Case Against: If you're literally a moisture farmer, most of this will probably hit a little too close to home.

Ah, Charlie Band, we meet again at last. For those of you not already acquainted with Mr. Band, he's pretty much the Steven Spielberg of self-consciously crappy cheeseball bargain-bin cult horror movies. His filmography both as director and producer is like the Sutton Hoo of intentionally shitty filmmaking. Like a malevolent spectre of failure, Charles Band hovers in the background of every Z-grade sci-fi or horror movie you can think of as some sort of producer, including such unforgettable polished turds as Shapeshifter and Arena. Not this time though. This time he's back in the director's chair, a role we haven't seen him in since The Dungeonmaster.

Incidentally, this movie is a Dungeonmaster reunion of sorts. Band has brought along both Jeffrey Byron and Richard Moll for the ride, and even recycles some of those ridiculous post-apocalyptic dune buggies. Well, okay, technically it's a pre-union, since Metalstorm was made a year earlier. Suffice it to say that if you're the kind of person who watched The Dungeonmaster and said to yourself, "You know, that Dungeonmaster's a hell of a movie, now if only I could watch that doofy virgin and his retarded cardboard cutout soapbox racer drive around a huge empty desert in circles for 2 straight hours," then you are this movie's sole/entire demographic, and that demographic didn't even exist until two years after Metalstorm hit the theaters.

Speaking of that stupid fucking car, it will be forever driving through our nightmares after seeing Metalstorm. We're pretty sure at least half of the shots in the entire movie either consist of watching the car drive around the desert, watching Jeff Byron drive the car, watching it park and Jeff Byron slowly get out, or our personal favorite, watching TWO people sit in the car simultaneously trying to figure out if the other person has realized they just farted.

What this movie tries painfully hard to pull off is "Star Wars meets Mad Max," only Charlie Band doesn't seem to have actually watched more than 12 minutes of either one. So in other words, if Mad Max had been nothing but a guy wearing lots of leather doing doughnuts in dune buggies with trash glued all over them and Star Wars a documentary about actual moisture farmers without the moisture farming, they totally would've nailed it. Starring Lil' Jeffy Byron as Bluke Blywalker and omnipresent B-movie star Tim Thomerson as Non Solo! Featuring a movie poster that looks like box art to a Star Wars Sega Master System game that was edited over like a counterfeit Rembrandt when they realized they couldn't afford to buy the rights from Lucasarts! Okay, maybe comparing this to Star Wars isn't totally fair. Even George Lucas couldn't make a Star Wars movie this bad. When your cantina (tentina?) scene uses the fucking apoplectic jogging music from Dungeonmaster, you know you've gone to a dark and horrible place: