Warriors of Virtue 2: Return to Tao

Overview: A mincey Australian virgin runs around the same 12 square feet of magical enchanted Chinese forest over and over with his asian not-girlfriend waiting for some kangaroo karate masters who never show up to save him from constantly getting his ass beaten by the evil lord Tommy Lee's Body Double.

The Case For: If you're a big Star Wars fan, this is pretty much that, except instead of Jedis and Ewoks there's wire-fighting and Chinese midgets. Oh, and the hero's name is Jeffers.

The Case Against: Possibly responsible for the death of Kevin Smith (no no, the other one - a.k.a. Ares from "Hercules: The Legendary Journeys"), who "fell" off a building in Beijing just after shooting wrapped. We don't actually have any strong feelings about him one way or the other, but anybody who spends most of his career trying to beat up Kevin Sorbo gets a couple points in our book. R.I.P. Kevin Smith II: Kevin Smith Thinner but Equally as Hard.

"The Warriors of Virtue" - no, they're not a fanatical purist LARPing collective or Christian power metal band sporting chastity belt codpieces, but you'll sure as hell wish they were about 5 minutes deep into this piece. They're more like, well, kangaroos. But not just any kangaroos - these are ancient, badass kangaroos, full of mystical marsupial wisdom and twirly choreography moves that make cool whooshing sounds at people. Sounds pretty awesome right? Well, no, not really, but maybe it could at least be entertaining in a ridiculous bargain bin Teenage Mutant Ninja Turtles knockoff kind of way at least? Maybe. Again, probably not, but we'll never know, because they're not actually in this goddamn movie.

Yep, that's right - the eponymous Virtue Warriors you might assume would have at least some minimal, Vanilla Ice-calibre lip-service cameo stake in a movie called Warriors of Virtue 2: Return to Tao are basically MIA for the entire film. Sub-nobody director Michael Vickerman - whose first movie was ironically titled Famous - must've bounced one too many checks at the whimsical Chinese costume rental emporium and opium den, because they just ain't here. They almost kind of sort of not really are-ish in the form of about 6 seconds worth of random flashback footage and some terrible papier mache statues that look like they were slapped together at gunpoint by horrible mutant Chernobyl orphans with mashed-up fingerless web-claw hands and lidless sucking biliary flesh holes where their eyes should be, but we're not sure that counts. And this mural to remind us that Kangaroo Yahweh is watching over us always, which will probably haunt our nightmares for decades to come.

Obviously a flick like this is pretty much guaranteed from inception to suffer from a nasty case of "sequel to a movie that never should've been made in the first place" syndrome, but whatever else can be said about the original, at least it had the magical kangaroo tree wizards (note: not a hip new racist epithet for Australians) part of the cynical Ninja Turtles cash-grab ripoff royale equation. Now all we have are a handful of lame wire-fu stunts and some flaccid excuse about how the Warriors of Virtue had all of the kung-fu marsupialness sucked out of them. It's like making a shitty Batman sequel that doesn't even have Batman in it - or worse, casts George Clooney as Batman, in which case you might as well just scribble down a gross veiny little cartoon ouroboros baby dick sucking itself off forever and staple a $12 million dollar price-tag to it. 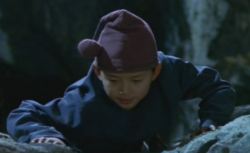 No time for love, Doctah Jones!Well, at least Warriors of Virtue 2 doesn't feature Arnold Schwarzenegger wearing Smurf-blue face paint and spouting one-liner word salad that wouldn't pass muster at a slam poetry session for third graders. Instead, our in-house villain is "Dogon", the Dark Lord of Slack-Jawed Gawking, who looks kind of like Slug from Atmosphere after a botched lobotomy. Unlike his previous character Ares, Lord of Carnage, who probably festooned his bedchamber with the flayed skin and icky miscellanous blood-gore chitlins of his slain enemies, Dogon prefers a more austere lifestyle. In fact, he lives in the world's first and last efficiency studio castle, which boasts a combination throne room, audience chamber and dungeon all in one. He probably keeps the chamberpot in there somewhere too, which in most cultures would constitute cruel and unusual punishment.

Of course, if the torture ever gets too overwhelming they can always just squeeze through the truck-sized holes in the jail cells and walk out the front door. This is pretty much the opposite of that prison from Dark Knight Rises: it's so easy to escape from that nobody even bothers trying, because they feel sorry for the guy who locked them up. So Dogon went with the low bidder for his evil fortress, but on the plus side he's very rich in the henchman department: (Watch on YouTube)