The Case For: If you like battle thongs, loin cloths, and glistening baby-oiled manbutt cleavage (i.e. if you're a Gorean), then this movie is your Godfather.

This week we've decided to take a break from our usual fare, and have a look at a real classic of the sweaty barbarian genre. Yes, it's Gor, based on John Norman's timeless book Transmen of Gor, a remarkably progressive and forward-thinking look at gender politics, filtered through the lens of an alternate Earth where...wait, hang on, we're just being told that the book was actually called Tarnsman of Gor. Wow, so John Norman was progressive and dyslexic, and he still went on to write a whole series of novels that people actually bought, presumably out of overwhelming pity? What a trooper. By the way, we were lying about that "classic barbarian movie" stuff, this movie is such a disaster that even the Goreans hate it, as evidenced by the parade of angry reviews on IMDB.

For those of you who aren't familiar with the "philosophy" (read: weird idiotic fetishy fandom-cult) of Goreanism (Goreanity? Goroastrianism?), it's basically just nerdy BDSM roleplaying with plastic swords. If you're into retarded caste systems, terrible pseudo-sci-fi harlequin erotica, greasy fat guys with dog collars and newsboy caps fantasizing about being Arnold Schwarzenegger, enslaving women, and the triple-threat stenches of untreated leather, jock itch, and sun-ripened fatty jerky, you might want to hit up Meetup.com to see if there's a creepy make-believe dressup club Gorean "Home Stone" near you. If not, this review is probably the closest you'll ever come to hearing about any of this bullshit again. Well, until we inevitably end up being forced to watch Gor II, anyway. In the meantime, welcome to Gor. 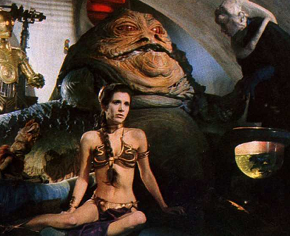 Gor the movie is a lot like Gor the place: a grim, desolate wasteland totally devoid of human thoughts and feelings. This movie has a story in the same way that rocks have souls. Giving a toddler a whiff of paint thinner and dropping him in a sandbox with a Burger King crown and some He-Man dolls would give you a much more entertaining and coherent script than anything you'll find in this dismal two hour word-slurry. In case that's not enough, how about we top it off with a bunch of guys wearing leather miniskirts, gigantic hats, and their mom's drapes as capes?

The man of the hour is esteemed Professor of Remedial College Physics and Magical Rings, Dr. TARL, whose name is not a typo because that's not even close to a real word in any known language, including stupid made-up ones like Klingon or Welsh. Tarley Davidson is so bad at math that he literaly thinks pi = 216^2, and he has to wear a calculator watch everywhere. And thank God he does, because his watch has to rival XCALBR-8 in terms of sheer overwhelming power. How else can you explain Tarls Barkley's ability to strangle people to sleep in one second, unless his watch is shooting out experimental knockout gas? And the fight where he kills an armored barbarian prince on horseback by just holding his sword-arm out limply can only be explained with a combination of gyroscopes and ultra-advanced artificial intelligence. It's either that, or we have to believe that the protagonist spends the entire movie bumbling ass-backwards through a desert wasteland, committing accidental murders.

Just how did Lawrence of Tarlrabia come to a world called Gor, you ask? Well, that's simple. See, he inherited a special ring from his father, or possibly from a Cracker Jack box, but either way it's totally sweet and possibly cherry-flavored from the look of it. Anyway, one night Tarl's Jr crashes his rusty antique shitbucket Herbie Gets a DUI-mobile into a tree, thereby magically transporting him to an alternate universe full of naked people LARPing as "Gauntlet" characters:

In case you didn't guess it from the fact that he just teleported into the mystical counter-Earth by way of a major road accident, Chris Tarley here is really, really stupid. How stupid is he? After getting sucked into a desert wasteland full of barbarians, nearly stabbed to death, pissing off the local cruel despot and getting a death warrant put on his head, his response is to think that it's all a prank played on him by his frat-boy acquaintance, Norman. Yep, armies of guys in loincloths and a vengeful priest-king, that's just typical Norm.