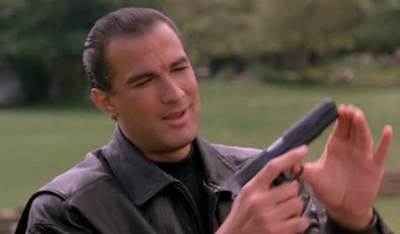 We could go on to tell you all about MASON STORM and his quest for vengeance and to fill every room in friends’ houses with Bowflex machines, but we really need to focus on his brilliant detective work:

That’s right, it took him seven years and multiple viewings of the same tape to notice that the guy who punctuates every other sentence with his stupid “You can take that to the bank!” campaign catchphrase might just be the politician who is famous for saying that exact thing all the fucking time. And his buddy who had the tape and wasn’t in a coma just didn’t have the raw intuition to make that leap of logic, even after reviewing the tape “a thousand times”.

Nothing else we could describe to you from Hard to Kill can measure up to the awe-inspiring stupidity of that shit. The most remarkable part of this movie is just how completely self-unaware everyone seems to be of what they’re making. The first 10-15 minutes consist of a bunch of fourth-wall breaking dialogue where these idiots mention the Oscars more times than the academy committee, which is weird for a movie that’s straining so hard to cash in on the craze of mostly straight-to-video 90s punch-ups about renegade loose cannon cops that it feels like the entire cast and crew could have a stroke at any moment.  And you can take that to the bank.