If there's one thing the kids were clamoring for this summer, it's jukebox musicals about singers their grandparents have probably hated for sixty years. And if there's one director who's known for his expertise at turning musical theater into blockbuster cinema, it's Clint Eastwood. That's the perfect formula for a film like Jersey Boys, and Martin R. "Vargo" Schneider is here to bring us the dirt. Elsewhere, history repeats itself as Sean "Keanu Grieves" Hanson takes a look at Think Like a Man Too, and Joseph "Jay Dub" Wade weathers the sweltering misery of Guy Pearce in The Rover.

EXPECTATIONS: I am so damn sick of biopics, especially musician biopics. Yeah, superhero movies are repetitive and tiring, too, but at least with them there's a good chance something might explode. Is there anyone out there who doesn't know exactly how all of these films go? Let's add in the fact that Clint Eastwood, Director has made a handful of amazing, near-perfect films, and then three times as many films that are so dull I want to claw my eyes out. So the odds are not sitting well with this one. The glimmer of hope for me is that I have a soft spot for '50s pop, and I like the music of Frankie Valli and the Four Seasons. But as Patton Oswalt has observed, I don't care where the things I love came from. Really, the only nice thing about making more biopics is that this is more fodder for when John C. Reilly finally makes Walk Hard 2.

REALITY: There's this ridiculous and irritating thing that happens in all music biopics where the movie bends over backwards to make an ancillary character deliver a phrase so awkward and stilted that no human being would ever actually say it in conversation, then there's an immediate smash cut to the musician singing the song which uses that phrase as it's title. (Here it's "Big Girls Don't Cry"). How many songs do you suppose ACTUALLY get written that way?

"Oh Cyndi, you Girls Just Want to Have Fun!"
"Y'know, Jimmy, the Lord says there's a Stairway to Heaven."
"Hey little Jonny, if someone tells you to lower the volume, you ask them 'Turn Down For What?"
"Excuse me Mr. Pachelbel, I spoke to my mother and she says CANON IN D."

This complete and utter lack of imagination is a perfect summation of Jersey Boys, a bland story told in a mostly unappealing style. Jersey Boys is more of a crime than most, because it takes a concept which seems to only work on the stage, and strip it of what makes it good or interesting in that medium. 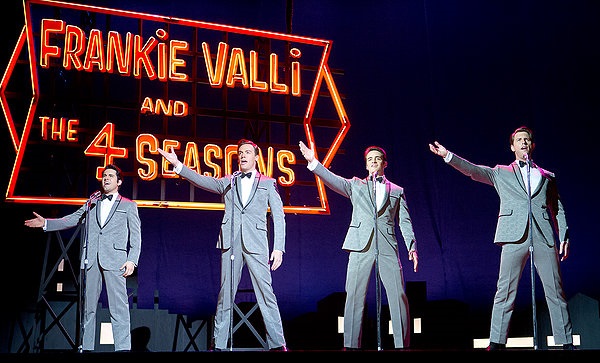 In the early '50s, Tommy DeVito (Vincent Piazza) is trying to get in good with mob boss Gyp DeCarlo (Christopher Walken), who has taken a shine to Tommy's friend, a baby-faced young man with a beautiful singing voice named Frankie (John Lloyd Young). After his mob plans and music plans don't work out, Tommy eventually recruits Frankie to his band, along with Nick Massi (Michael Lomenda) and songwriter Bob Gaudio (Erich Bergen). As a side note, in this film, Bob Gaudio is shown as absolutely faultless and pristine, which may or may not have anything to do with the fact that Broadway show was commissioned by the real-life Bob Gaudio. Eventually, and by "eventually" I mean "45 minutes into the friggin movie" they write and record "Sherry" and become the mildly popular group we all barely kinda know. However, Tommy's spending habits eventually cost a million dollar hole in debt to the mob and IRS, leading to the breakup of the band. And that's basically it. That's the story that Clint Eastwood seems so desperate to tell. Oh, and there's a dude playing young Joe Pesci, for some reason.

The thing is, this uninteresting story works on stage, because there the story isn't important, it can be covered up with glam and camp and dance numbers. When you strip all of that away and play it completely straightforward like Eastwood does, you have to come to terms with the fact that this is a really boring story about three guys who let a sociopath ruin their lives because they happened to share the same zip code as kids. 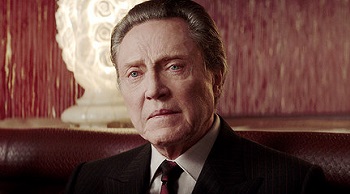 FUCK. YOU. JERSEY. There is a reason you are giant punchline. You are the Arkansas of the Northeast. You are the spot where a man stops off at the side of the road to pee in-between being in better places. Thank you very much for Bruce Springsteen, but you also gave us Bon Jovi and Donald Trump, so all-around net loss, you Chris Christie-electing chucklefucks. Stay on your own side of the goddamn bridge, quit filling every bar and club in America's birthplace with the stink of Axe body spray. You can take your lousy excuse for not writing believable character relationships, bury it, and see if a decent screenplay grows, Garden State. At one point in this movie a character says "If you really think that Frankie would have cut Tommy loose, then you ain't from Jersey." No, I'm just not a self-destructive asshole idiot. But I guess we're saying the same thing.

Leaving the Jersey part alone, Jersey Boys is just not a good film. I will admit that there are a few moments throughout where I found myself smiling and tapping my toes, but that's not really anything to do with the film, that's because there's four guys on screen singing good songs that were written sixty years ago. It's just fan service, pandering to an audience whose fans are conveniently the same age as Clint Eastwood. There's exactly one moment, the end credits, that goes into full-on Broadway song-and-dance number, and that part is pretty entertaining. I'm not sure why Clint thought stripping the rest of the film of the only thing which makes the show interesting was a good idea, and I'm also not sure why we couldn't have just had a complete movie musical which embraces its silliness the way Hairspray did. But instead, we get a dry, forgettable adaptation with a flawed narrative structure and weak characters. And we're going to keep getting this story over and over again, until finally Samuel L. Jackson completes his team of Frankie Valli, Ray Charles, Johnny Cash,Tina Turner, and Jim Morrison.

MINORITY REPORT: This is why jukebox musicals only work when everyone agrees that having an actual story is meaningless. Then again, that still wasn't enough to save Rock of Ages. - Joseph "Jay Dub" Wade