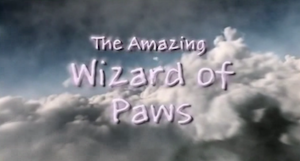 Overview: Upon his twelfth birthday, Bobby - the world's most punchable kid - is propelled into a new life of godless witchcraft and showbiz whoredom when he is possessed by the spirit of Lord Satan Hobo Merlin, and joined by his trusty demented six-hundred-year-old talking dog Ozzy. With their amazing powers combined, can they win America's Least Untalented Shithead Kid Talent-Ish Olympics for Dollars, and dodge the creepy advances of the dark mage Molestro?

The Case For: "Tiny" Lister gets a 10 second spot screaming in the kid's face only to get blasted with a shrink ray and become "tiny" (get it? GET IT??!?) At least this wasn't quite as terrible a career move as agreeing to appear in Dracula 3000.

The Case Against: It's not actually just this video.

Looking back, even after almost three years on the job, we've barely put a tiny dent in the massive library of unwatchable motion-picture garbage out there. Maybe we're just not being efficient enough[1]. Fortunately, director/writer/actor/special effects expert/canine vocal coach Bryan Michael Stoller has seen fit to help us out. Normally, we would have to watch one movie about smelly vagrants/wizards fighting a deadly battle of lens flares, and then a second shitty movie featuring talking animals vomiting ill-conceived dialogue out of fourth-rate CGI mouth holes. But now with The Amazing Wizard of Paws, we can experience all of that in just 90 minutes of pure, white-hot agony. What better way to hasten our descent into the madhouse?

It pains us greatly to say this, but Stoller and company should have just made a full-on talking animal movie. They actually managed to find a pretty photogenic and well-trained dog, who clearly should have been the real star of this movie, instead of his pre-pubescent sidekick Bobby, who is a walking neon advertisement for an atomic wedgie. Sadly, Ozzy the dog fails to live up to the promise of an "Amazing Wizard of Paws", with his only magical gifts being speech and a supernatural ability to detect assholes[2] and cock his head at them in confusion. The dog mainly just ends up as window dressing for a much stupider plot involving an eternal battle between two ancient wizards spanning time, space, and some generic suburban backyard with a sunken pool: 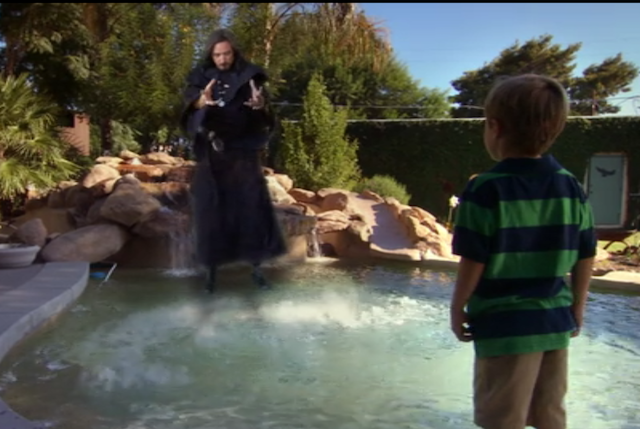 [1] We did at least manage to exhaust the entire Recon series with no more sequels in sight, so at least we feel like we’ve made some progress.

[2] We’re not sure about the “supernatural” part, since most dogs smell assholes wherever they go anyway, and especially since everyone in this movie is such a pungent, gaping asshole it’s not even that much of a trick honestly.