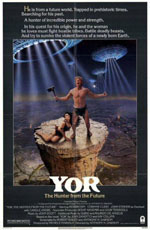 The Case Against: Explaining why you shouldn't watch this movie would be an insult to your intelligence. It's cheap, ridiculous, unfathomably boring, tacky and ill-conceived.

I don't know how to introduce Yor: The Hunter from the Future any better than the film itself introduces him. Against a grey backdrop of stony, mountainous Italo-Turkish scrubland, Yor emerges. Loinclothed, axe in hand, he runs down a rocky hillside toward the camera. The opening strains of the classic theme song, performed by Oliver Onions (best known for their hit "Come With Me for Fun in My Buggy"). The song informs us in no uncertain terms that this is Yor's world, and that he's the man. Actual lyrics:

Lost in the world of past
with the echo of ancient blast
There is a man from future, a man of mystery
Yor's world! 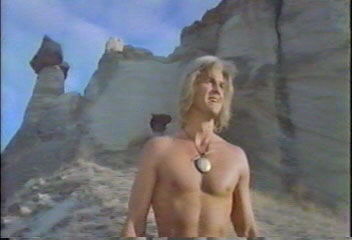 Our first impression of Yor is a fittingly clumsy one, since he's careening down a hill, looking barely in control. Filmmaking hint: it's a terrible idea to establish a character by making him run down a steep hill. The human body isn't built for it, and our ill-suited legs can only compensate with flailing, galloping baby steps.

But, I gotta say, Reb Brown's body looks like it's built for all sorts of things, like tipping stuff over and jumping up and slapping stop signs. As he reaches the bottom of the hill, he looks around him, surveying his world, quickly realizing it's really freakin' bodacious. His vacuous smile betrays the kind of mysterious smugness that an autistic child might feel after telling a snail a secret, or yelling into a dog's butthole. For the duration of the theme song, Yor continues to careen through the wasteland, stopping only to look both ways and smile dimly, as if he's worried that he'll be hit by a train made of puppy giggles.

When the credits are done rolling, we witness the classic scene of idyllic caveman life: the cave-elder says some vague bullshit about how the gods have blessed them with this wonderful fertile valley, and then he tells his people to "pay homage to the gods by raising [their] children to the heavens." And everyone lifts up their bored, confused kids up by the armpits and kind of holds them there until they decide it's been long enough. Then everyone goes off to The Hunt". 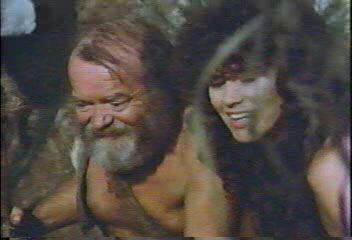 It's during The Hunt" that we meet two of our supporting heroes, a curly-topped cave-babe named Kala, and a grizzled dude named Pak, played by Grandpa Seth from Troll II. If you've ever wanted to see the old dude from Troll II in a fur toga, your ship has finally come in, although it probably comes in all the time because you've got pretty goddamn low standards in ships. Anyway, brillo-top and Grandpa Seth stalk a pig dressed as an armadillo for a while, and are then attacked by a savage, bloodthirsty herbivore. Yor hops down from his beloved hills and clubs the shit out of it, then screams with a mighty reverberation: "YEAAAAEEEEEY!"

Victorious caveman dance party ensues. Girls dance wearing clothes made of sticks, and people drink from bowls made from hollowed out Generic Primitive Bowl Material. Yor and Kala have a lil' moment.

The game of face-footsie is interrupted by some evil cavemen, whose dour faces reveal a hatred of all romance and festivity. They bumrush the shindig, burn everything down, carry off the women, and leave our heroes pretty bummed out. Pak commands Kala to travel with Yor for safety, and then returns to the village to speak with a groaning, dying elder, who tells him everything we already know: he must travel with Yor, because his fate lies with him, etc. The first mention of the word "fate" in a cave-barbarian movie is a magical time in a young cave-barbarian movie's life. 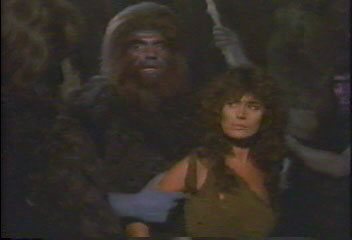 After some boring journeying, a couple of pep-talks about fate and a skirmish or two with the evil cavedudes,Yor is beaten up and Kala is captured and taken to a yucky cave to serve as a squealing sexgirl for the badcavers. The evil guys have an entire cave full of purloined cooch, and Kala is their new prize hog. Aha! So this is where they took all the stolen women and children! Clearly, Yor must intervene.

Two of the ne'er-do-bathes get in a grunting fistfight over Kala, and the winner celebrates by slapping the hell out of his woman-prize, seemingly for no reason other than pure jerkness. Just as Kala gets her teeth rearranged, Yor shoots down a giant cardboard cave-bat, grabs it by the haunches, and uses it as a hang glider to float down into the bad-dude cave. The moment is such an awesome display of Yor's manliness that the score is interrupted, dissonantly and incongruously, by the strains of the theme song: "Yor's world, he's the man!" And, at this moment, he is the man.

Yor beats the shit out of some cave baddies, Grandpa Seth shoots a few with arrows, Yor steals Kala and hoofs it outta the cave as quickly as his bronzed beef logs will carry him. Miraculously, he discovers an underground lake in the cave, and with his amazing Super Yor Strength, he pops open the dike that holds it up, sending a crashing flood into the bad dude lair. All the jerks drown, and their underground asshole city is ruined. Booya!