In the previous installment of "The Empire's Bogus Merch," Steve's intrepid Trandoshan Jedi Padwan Blug "Blurg" Grindel, along with his Jedi Master Ruth Sargasso, were tasked with escorting Jabba the Hutt's Daughter, Beth Hutt, to a Yadda concert on Cloud City. They were joined by be-wigged Mon Calamari Spurj Bubblo and human rogue Jyff Goodshot who seemed to have an agenda involving counterfeit Yadda merchandise. Upon arriving on Cloud City, the group was invited to attend Lando Calrissian's costumed dinner party at Cloud Restaurant. Beth Hutt is intent on getting an autograph from Yadda. The theme of the party is "Endor." It's a bit of a touchy subject for Blurg, considering his brother was killed by Ewoks. 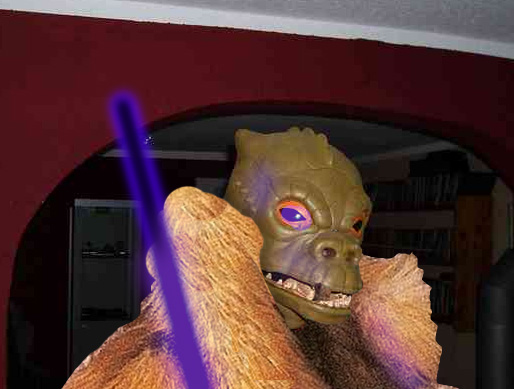 Zack: Turning cube wipe to the interior of your hotel room on Cloud City. Alright, you are preparing for the dinner party which is in one hour. Jyff and Spurj have not been invited so will be going to the venue to scope out a good spot for their merch stand. Out of respect for your dead brother, Ruth and Beth have decided not to dress as Ewoks for the dinner party.

Steve: What are they going as?

Zack: Ruth has an elaborate "scout on speeder bike" costume. Beth Hutt will be dressed as a tree. What is your costume?

Steve: I will be dressing as a Gorax, which is a giant that eats Ewoks on Endor.

Zack: Alright, how are you making your costume?

Steve: Wait a second, how did the other two make their costumes?

Zack: Ruth has an array of disguises ready as a Jedi and Beth Hutt travels everywhere with an entourage that includes a fully-trained Hollywood-quality monster makeup artist.

Steve: You didn't say anything about her having an entourage.

Zack: She's a Hutt. She doesn't go anywhere without at least three twi'leks, a small musical band of rowdy aliens, a creature that laughs at whatever she says, and a Bothan who interned with Stan Winston on Pumpkinhead. They're always on one of those floating barges from Return of the Jedi.

Steve: Are there slave girls?

Zack: And you still haven't told me how you're making your costume. What skills do you have?

Zack: I'm glad you have that pilot skill at 1 because otherwise your character might not be very well-rounded.

Zack: Blurg didn't fill out his own character sheet. How do you even grow up into an adult and your only skills are climbing and jumping?

Steve: He's a child at heart?

Zack: Alright, you climb around the ship looking for things to use to make your costume. You end up cutting a hole in a brown sheet and sticking your head through it. You think it looks pretty good. It doesn't look pretty good.

Steve: That's a good costume though because I can conceal my blaster and light saber underneath it.