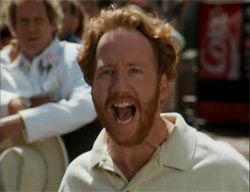 Timothy Busfield: ACTOR!"Let history be the judge," is a saying used by politicians to deflect attention away from their mistakes. They attempt to inoculate themselves against criticism by portraying their decisions as too lofty and complex to be judged in the present day. I think it's more of an appeal to laziness. A sort of "don't worry, be happy" that absolves us of the responsibility of thinking critically about our present time and present action. Go with the flow and let the academics write what they may in their musty books.

That unwillingness to engage the present as significant can lead us down some terrible roads. It can give us the freedom from consideration to do things that we cannot take back. We may, in our haste to act, unleash horrors such as the world has never seen. Horrors like 1993's The Skateboard Kid. Horrors like a flying skateboard with the voice of Dom DeLuise.

It's easy to remember the 1980s as a time of ridiculous and often garish excess, but a viewing of The Skateboard Kid is all it takes to remind us that the early 1990s are no less culpable for the disintegration of our society.

The opening sequence of The Skateboard Kid establishes the small California desert town of Mill Creek. It's the sort of place where a guy in a chicken suit stands outside the town's only fried chicken restaurant and shouts to the zero pedestrians and cars driving past to come try the chicken. It's the quiet kind of town where there's only one cop and he parks his car right next to the guy in the chicken suit and eats his lunch. A place where a bunch of evil white kids who love skateboarding hang out in an abandoned warehouse that's equipped with strobe lights and a half-pipe. 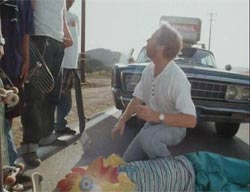 Chicken Down! Chicken Down!The evil skateboard gang (The Mags) is led by Snake, the son of the town's only successful entrepreneur, a seedy used car dealer they call Big Dan. Snake spurs his compatriots into tying a cable to the back of the sheriff's car. Once they give him the thumbs up he snatches the chicken mask from the guy in the chicken suit and skates away. The sheriff tries to pursue the Mags, but the big wooden spool at the other end of the cable crashes into the back of his car.

Meanwhile, in a real city, skateboarding enthusiast Zack bids a last farewell to his friends and reluctantly climbs into the car with his hapless father (played by the immortal Timothy Busfield). Zack's dad has a new job in Mill Creek as the managing director of Mill Creek's TV station. Zack grumbles and gripes inanely about the move, Busfield gets them lost in the desert and buries his face in a map. He's so focused on the map that he doesn't even notice that he is driving five miles an hour and that they have been spotted by the Mags, who apparently hang out in the middle of the desert to do kick flips off of dust and scrub brush.

The Mags surround the car. Snake, wearing the chicken mask, pretends to be hit by the Busfield family station wagon. His father is horrified, but Zack is unimpressed by the chicken-masked antics and the dismaying "to get to the other side" punch line. Snake points out that Zack isn't laughing.

"I was, but then you took your mask off," Zack replies woodenly, prompting a chorus of wounded hisses from the Mags and nearly prompting fisticuffs with Snake.

Busfield intervenes and the two are on their way to Mill Creek despite some misdirection from the Mags and a prank involving their luggage container on the roof.

At the eight minute mark the movie launches into its first of several lengthy montages. They shorthand their way through Zack redecorating their new house by tacking some crap to walls while his father slaves away at the TV station. His job involves doing everything on-air at the station and necessitates doing huge stacks of paperwork. His weatherman routine is so shoddy that he points to a wooden map of the area and knocks numbers off with his pointer.

The montage draws to a close and Zack finally gets a chance to explore Mill Creek on his skateboard. No sooner has he coasted unsteadily down the sidewalk than he encounters a leukemia survivor who has run afoul of the Mags. Snake has taken the little boys bike as the kid fights away the debilitating agony of bone marrow transplants and chemo to plead for the return of his bicycle. Zack arrives and almost immediately knocks Snake over into a mud puddle.