Wednesday, May 04, 2005 by Josh "Livestock" Boruff (@Livestock)
Welcome to this to optional, freeflowing, train-of-thought pseudo-Livejournal full of half-assed ideas, inspiration, and anything else we feel like writing about but know isn't entertaining enough to warrant a full article or front page feature.
Today's Update

This lovely update came from an Internet conversation with a friend that happened online – on the Internet. I tend to be one of those annoying guys who throws out lots of stupid ideas, then later attempts to pass those ideas off as comedy. Some people get angry with me for trying out material on them, but I usually don't see it that way. I don't really look at it as material until after the fact, when I have no other ideas.

A lot of times after saying something stupid, I'll go to great lengths to try to spin it in some wonderful fashion so that it sounds vaguely intelligent or philosophical. I really wanted to make having parasites sound pleasant and admirable. That said, I needed to get this idea out of my system so that I'm not still thinking about parasite economies weeks from now. That sort of thing can't be healthy at all. I kind of decided to make a whole update about this because it sounded like the premise to some really bad Kilgore Trout-style science fiction story. Bad science fiction is something I moderately enjoy from time to time! In retrospect, combining the "thrill of economics" with the "biology of parasites" turned out to be something resembling a headache. Still, at least I was writing about something, unlike 90% of my updates.

I'm guessing this article will get me some angry e-mails. In the past, whenever I've criticized aspects of capitalism – and you guys no doubt notice I do this all the time – I've been branded a socialist and told to move to Canada where "they eat that shit up." It's a shame, as I wish people would seriously consider my idea of foregoing modern capitalism in favor of parasites.

I had a crisis of ethics writing this update because when I came to the second sentence, I did something I vowed I would never ever resort to. I told a fart joke. I consider this to be the absolute worst thing in the world and I violently hate people who tell fart jokes or find them funny. I'm going to commit seppuku as a result. 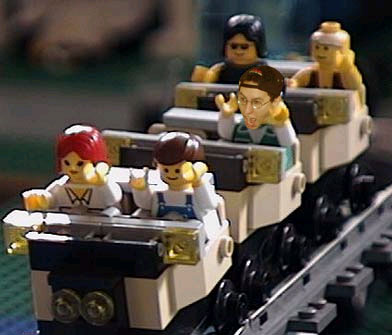 In a recurring dream, Kevin "Fragmaster" Bowen finds himself in a LEGO world forced to ride a scary roller coaster.

I've been here for over 3 years and I've never gotten as much feedback as I did last week. Normally I get a couple e-mails a week and at least one usually advocates me doing something mortally wounding to myself. But I got a tremendous amount of positive feedback, so I'm grateful to have entertained a selection of you finely crafted Internet persons. I sure hope more of my grandparents die so I can be inspired to write more updates like that! Apologies to the people who expect me to write like I did last week every week, because most of the time I just awkwardly type out bad jokes about people with disabilities.

I was kind of skeptical of this whole Daily Dirt feature idea when I first heard it, but it's been pretty fun so far. I've been getting a lot more feedback than normal, which in turn makes me not want to write horrible updates as much. I'd hate to have to sit here and say, "Well, you see, it was very funny thinking about hippopotamus astronauts at the time. I guess you had to be there in my room at 4:00 AM while I was sweating and drinking my fifth Mountain Dew and working hard at giving myself diabetes." But then again, I generally hate everything I write, so I'll be offering up excuses no matter what.

Unsolved Mysteries Update: The Case of the Banana Cream Pie

New research has concluded that the banana cream pie is delicious. Case closed.

I found out the other day that Indiana, the state of my birth and orchestrator of the greatest torments in my life, is finally embracing daylight savings time. I lived in Northwest Indiana, up until late last year, so I got the full clock switching action. The rest of the state lived in some kind of Savage Land time bubble where society had scarcely evolved past Neanderthal-style idiocy. Don't get me wrong, the northwest section was just as vile, but at least they used daylight savings time. Basically what I'm trying to say is that if you live in Indiana and can actually read this: get the hell out of there.

I say all of this because I haven't complained about Indiana recently. Life in Washington is very nice and pleasant for the most part. In that sense it's difficult because I have slightly less to complain and be bitter about.

The True Story of the Sand Update

SpokkerJones, a veritable butthead of sorts, dedicated one of his early updates on this site to the topic of sand. That's right, sand. As in what you find on a beach. But did you know that this glorious update was over two years in the making?

It all began in February of 2002 when I was still new to the update game and barely able to come up with good topics. At some point the impending summer entered my mind as a possible generic topic. My thought process drifted from the concept of summer, to the concept of the beach, ultimately focusing on sand, the foundation of the beach. I have no idea why, but I remember pitching the idea to Scott "King Fucious" Delbango for feedback and I'm pretty sure he laughed at me. I shelved the idea and just ran one of Lowtax's old updates through Babelfish and back, as was the custom in those days. As of late, I'm pretty sure Scott rides his bike around at night while high. I think that's what he does in lieu of writing.

Years later when Tom "Moof" Davies showed up to be a writer, he too found himself with difficulty coming up with topics. I think this was due more to the fact he was in school fulltime and working fulltime and very busy. I suggested to him one night he write about sand as a joke. He thought the idea was ridiculous. However, this glorious idea stuck with him, and he later pitched it to SpokkerJones, who for some reason actually wrote an update about sand.

Basically, what I'm trying to say is that I want royalties if that sand update ever gets adapted into a major motion picture event. I also want 20% of merchandise sales, including action figures and apparel.