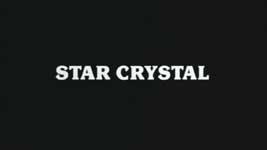 Overview: A small crew flees the destruction of a space station aboard a tiny, tube-filled ship, which coincidentally houses a murderous alien blob of goo.

The Case For: The cut scenes of the space ship and space stations are nearly up to early Star Trek quality.

The Case Against: The characters are either one-dimensional stereotypes or simply a mode of transportation for their enormous hair. Quite possibly the lamest twist ending ever recorded.

Note the fearsome Martian clouds floating through the terrifying blue Martian sky.The Eighties were a simpler, more innocent time. No one suspected their neighbors of being terrorists who wanted to kill them. But there were terrorists in America back then. They were just too busy making godawful movies to go around hijacking planes. Lance Lindsay's "Star Crystal" is just one example of that cinematic terrorism. Unlike many of the movies reviewed here at Something Awful, this film was given the blessing of a reasonable budget. That budget clearly went toward special effects. Well, special effects and a whole lot of crystal meth. Aside from the passable effects, this movie is loaded with more crap than a Mexican restaurant men's room. Lindsay not only directed this space epic, he also wrote the script. Thus, all of the contradictions and nonsensical occurrences are solely his fault. As for the cast's hair, well, that's society's fault.

The year is 2032. The planet is Mars. The precise location is near the crater Olympus Mons. This is just a routine expedition. I know all of this, because it is all included in the stupid opening graphic. And Olympus Mons is a mountain. It's a good thing the graphic clarifies that this is Mars, too. Otherwise I might think that it's just a random open space with a really, really crappy red filter. A pair of astronauts unearth a large rock from the harsh Martian soil. Naturally, like any astronaut who has ever found a rock in his life, they have to bring it aboard their spacecraft. Personally, I'd think that by the time space travel has advanced enough to make expeditions to Mars routine, our scientists wouldn't be peeing themselves over rocks. I guess that's why I'm not part of the space program. On the ship, the two astronauts take off their spacesuits and congratulate themselves for another rock successfully picked up and brought onboard. Way to go, guys. The ship's resident Scientific Rock Examiner points his Official Science Gun at the rock and determines... that it's a rock. We've come a long way by 2032. When it is finally left alone, a smoking hole opens in the rock and it leaks a mysterious white liquid.

At last, the rock crumples like a deflated beach ball - exactly like a deflated beach ball, in fact - exposing a large crystal. As for the small puddle of mystery goo, it turns into a puppet that looks like a cross between a calzone and a dog toy - I mean, it turns into an alien. A computer screen slowly displays that the air supply has been cut off. Apparently in the future, our most advanced computers will run on DOS. And not particularly well, either. The computer vocally alerts the crew, but they're much too busy dying in their sleep to be bothered with anything like that. Oh well. So much for the space hicks and Dr. Science.

Never fear, Col. William Hamilton has his hair on the job!

Two months later, Colonel William Hamilton and his gigantic hair arrive at a space station for an emergency council meeting to discuss the ship that arrived at the station with a dead crew. Because this movie was made in the Eighties, when having hair large enough to require its own driver's licence was considered sexy, an attractive blonde flirts with Hamilton as he makes his way to the meeting. Aboard the infamous ship, engineer Roger Campbell and his black friend, Token Black Guy, are hard at work on the bridge. Roger cracks up at his own joke about the armless bell-ringer who takes over for Quasimodo. If you don't know the joke, don't worry. It seems that it will be all the rage again in thirty years or so. I guess jokes become funny again once every century.

With a swarthy glance at the script, Token Black Guy discovers that he is not amused by Roger's white humor. Just then, the ship shakes violently, as exhibited by the camera shaking and Roger staggering. Token Black Guy staggers, too, just a few seconds later. Beautiful. Alarmed by the sudden shaking, two women run down a hall at roughly six feet per hour. At that rate, they'll discover the source of the problem just two years after it kills them and vaporizes their corpses. Back in the council meeting, Hamilton asks what level Four is on. "Second," in the reply. That's right, in the future, floors will be given numbers that in no way denote their actual position within a building. Get used to it now, folks! This golden age of reason is nearly upon us! This answer satisfies the Colonel, so he and a whole load of extras, including one guy who seems to think that being in a movie is just the peachiest thing ever, run around on a bunch of escalators.

New Chia-Ugly is available in stores near you. Move.

Billie Lynn, a hideously ugly woman whose sole purpose in life is to provide transport to the colony of raccoons that has attached to her skull, reports from the ship's engine room that there is a fire on the station and they need to leave. Roger pilots the ship out of there just before the entire station explodes. That must have been one holy hell of a fire. Roger, Token Black Guy, a blonde woman named Sherrie, and a brunette named Adrienne sit in shock / stupidity for waaaay too long before Billie arrives on the bridge. Don't ask me how, don't ask me why, but for some reason each and every time the camera turns on Billie, she is noticeably uglier than she was before. I swear to God she doesn't have a gap between her front teeth the first time she appears on camera, but by this point she could floss with a coconut, were she so inclined. Once it is established that this ship is not meant for long-range travel, they only have enough supplies for a few months, and that it will take eighteen months to reach Earth, Token Black Guy takes charge. He assigns specific duties to everyone, asking Roger to fly the ship. Adrienne takes exception to this decision, but she promptly shuts up when a man starts talking. As for himself, Token Black Guy gives himself the task of overseeing things. Yep, basically he gets to sit around and do nothing. He then immediately proceeds to hit on Sherrie and rub his own nipples. When Roger takes him to task for this, Token Black Guy responds, "I can't help it, man. It's in my blood." Hooray for positive black role models in the movies!

Before we go any further, let's take a moment to examine some numbers. The spacecraft, which supposedly is not designed for long trips, is the same one that flew from Mars to the now-defunct space station. So we know that must not have been a long trip. We also know that these events occur two months after that Mars expedition, so the ship made the trip from Mars to the space station in two months at the very most. Now the same ship is going to take eighteen months to get from the space station to Earth. Let's give "Star Crystal" the benefit of the doubt and say that the space station is a full two months voyage from Mars, in the opposite direction of Earth. Even so, that would mean that it takes sixteen months to get from Mars to Earth. Mars is approximately 35,000,000 miles from Earth at its closest point. If it takes the ship sixteen months to cover that distance, than it would have to travel at roughly 3058 miles per hour. In 1959, the Soviet rocket Lunik II made it from the Earth to the moon, a distance of 220,000 miles, with the assumption that the moon was at its closest point to the Earth, in thirty-five hours. Lunik II was therefore traveling at no less than 6285 miles per hour. And that, in turn, would mean that in the year 2032, our rockets are not even one half as powerful as they were in the 1950's. There is no way in hell that a rocket that weak could ever escape the gravitational pull of even the pussiest planet. This information has no real bearing on the plot, but I'd just like to point out that Lance Lindsay could have cracked open a World Book encyclopedia and adjusted his numbers accordingly to make his script just a little bit more plausible. Instead, he decided to be a dick. Way to be a dick, dick.

Back in the engine room, Billie tells Roger over the intercom that she's working on getting things online. Once again, she is mysteriously uglier than ever. However, I can't make fun of her for her incredibly, unbelievably bad looks, because she's the requisite tough gal. You know she's tough because she shouts randomly selected words from all of her lines. Either she's tough as nails or she's just a stupendously piss poor actor. It's a toss up, really. Roger and Adrienne fight over the intercom, so as to demonstrate that she is the professional, yet feminine one. Then Sherrie enters the bridge to give Roger and Token Black Guy sandwiches and get hit on. So she's the bimbo. Okay, do we have our female characters straight? Terrific. I have to say, though, I tend to worry about the quality of the future's space program when a woman whose conversational prowess is restricted to complaining about her weight and crying can become a "nutritionist."