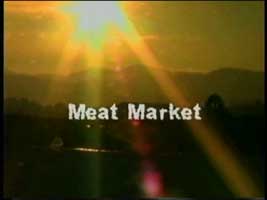 Overview: Two former bounty hunters fight off a city full of hungry zombies with the help of three laser-toting bisexual vampires and a completely unnecessary wrestler.

The Case For: Hey, it's got vampires fighting zombies. It's only a ninja away from being the best plot ever.

The package describes the plot of "Meat Market" thusly:

When two former employees of a company that conducts bizarre medical experiments put two and two together, they realize that a series of "animal attacks" reported by the media are actually the work of flesh-eating zombies created by the company. As the walking dead invade the city, the two truth-seekers team up with three vampire women, a washed-up Mexican wrestler, a wounded soldier and a mysterious scientist to fight for their lives.

That's total crap. Let's clear that up right here and now, before you go any further into this thing expecting to read about animal attacks. If there was ever a scene depicting the media trying to skew the wave of destruction as animal attacks, it never made it into the final cut. However, since this thing was shot on a cheap digital camera that the director probably swiped from his dad's closet, I'm inclined to believe that the final cut is all there ever was. Also, the two employees never put two and two together. They have two and two sitting right in front of them, but they never manage to do any of the together-putting on their own. They need poorly-scripted help for that job. The phrase "as the walking dead invade the city" applies to the first three minutes of the movie. The city is pretty damn well invaded after that point. Also, they never team up with the wounded soldier or the mysterious scientist. In fact, one of the major plot points is pretty much based around the unbelievable extent to which they don't team up with the mysterious scientist. Other than those minor points, the blurb sums up the movie pretty well. If you've seen George Romero's classic "Night of the Living Dead," then you're familiar with the basic habits of the zombies from the Resident Evil video games, and if you've played a Resident Evil video game, then you've seen this movie. Sure, "Meat Market" has a couple plot twists to separate it from those products, but every one of those twists sucks. Every last one of them. Basically, the only thing this movie has going for it are two hot female vampires making out with one another, which, ironically enough, is actually done better here than in "Vampyros Lesbos." If you're intrigued, then by all means read on and marvel as fifteen minutes worth of plot is stretched out to ninety minutes of nonstop, uh, movie! 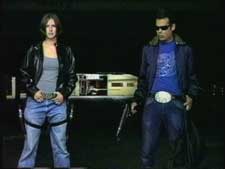 Argenta and Shahrokh are always at the height of the zombie-slaying fashion scene.

The opening montage sets the pace for the rest of the movie, assuming you consider "Hey look, we're in a city" to be a pace. We see a bloody body laying on the ground, then cut to someone eating a chicken drumstick -- I mean, human limb. No wait, I mean chicken drumstick. There's an awful lot of flesh-eating in this movie, and poultry with food coloring stands in for body parts for the close-ups. You get used to it pretty quickly, right around the moment when you finally accept that this movie is terrible. A man and a disgustingly fat blond girl run from a bunch of lumbering guys in suits in the distance. Although we can't see their makeup, we can tell that they men in suits are zombies. It's a rule of thumb in the horror movie industry that if you're wearing a suit and you're lumbering, you must be the walking dead.

Despite the fact that the two humans are running at top speed and the zombies are staggering roughly one step every forty-five seconds, the dapper undead manage to catch the guy. As for Blubberella, Queen of Pudding, she jiggles as fast as the congealed lard-logs she calls legs can carry her into a nearby parking garage. The zombies advance on her, as is their style. Zombies spend the majority of their time advancing on people and things. Just as they are about to reach Cookiedough McFolds there, the lights in the garage go out. We hear the sounds of gunfire and the screen lights up with the flashes of muzzles. I wouldn't go so far as to say that the sounds and the flashes are in sync with one another, but that's just because they're not. When the lights finally come back on, the zombies are dead, and two well-armed vigilantes - Argenta and Shahrokh - are standing over the bodies. Shahrokh tosses Fatty a pistol from his duffle bag o' firearms. If she ever caught a gun in real life like she does in this scene, she would have a bullet lodged in her flab, right next to the half rack of ribs that she dropped that one time. As it is, she runs away. My guess is that she'll be caught by the zombies and provide them all with enough food to last all year. Argenta and Shahrokh turn on their heels and walk away incredibly slowly, because they're just too damn cool for a normal walking speed. 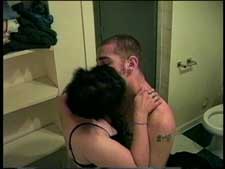 Be very, very glad you can't see more of this picture.

Week One - A panhandler sits in the ground reading a book while his guitar lays propped up against the wall beside him. He is so engrossed in his literature that he doesn't notice the pack of zombies until they start eating him. Let that be a lesson to all you panhandlers out there - if you want to play music until people feel guilty enough to throw a few coins your way, that's fine, but the second you expect people to pay you for sitting there and reading a book, you can expect to get eaten by zombies. Another zombie chases down and devours an ugly nerd. An annoying yuppie yaps to a TV camera about how he thinks the zombies are doing the city a favor by cleaning the streets of nasty homeless people, then he gets eaten by zombies. Ah, zombie-enacted irony - it is a bitch. 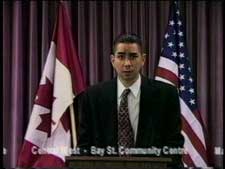 "Next on our agenda, someone stole my milk money again. I've called in the National Guard."

Argenta stands guard as Shahrokh loots the hell out of abandoned, unlocked convenience store. Nothing actually happens while he's in there, so basically we get to watch him shop for a few minutes. One of many brilliant directorial choices by Brian Clement. Once our heroes are done shoplifting, they drive off. The next morning they are still driving. Argenta takes a look through the food, then mentions that she has a sister who lives in the city who she would like to find. Shahrokh makes the stunning observation, "Getting pretty bright out." And that's the end of the scene. Not just that, it's the end of the week! Naturally, this leaves us with the question, why the hell would he say something like that? Technically it could be considered foreshadowing, except that he'd have no reason to suspect that vampires are going to get involved down the line. So essentially their conversation breaks down to:

Argenta: "Hey Shahrokh, my sister is still trapped in the city which is being overrun by a horde of relentless undead fiends who would tear her limb from limb and feast upon her bodily organs in a best case scenario. More likely, they would simply bite her and infect her with the zombie plague, transforming her into a shambling beast motivated only by hunger for human flesh. We have to save her from this unspeakable fate, for she is my only living relative, and her loss would be too much for me to bear."
Shahrokh: "We all have problems. I have to squint a little." 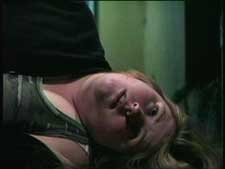 Week Two - Some oily-faced punk who looks like he's maybe thirteen gives a televised address on behalf of the mayor's office, saying that the city is now under martial law. Too bad for him, zombies have no respect for the man and his laws. To that end, they break into the room and knock out the TV camera. From that phenomenal starting point, the second week dives into clips of a house on fire with gunshots and sirens in the background, people running in a panic, and some random car exploding for no reason. The police do their best to fend off the zombie invaders, represented by pointing their guns for a few seconds at a time while the same looped track of gunshots plays over and over.

The cops also deal with the zombies with such effective techniques as running at them, and complaining. Two cops bitch about how much fighting zombies sucks. A ranking officer comes over and yells at them in the most effeminate manner possible. In order to show that he's the boss, the officer whips out his faggy little pistol and shoots a civilian. There's an army of zombies getting closer with every second, and he shoots a civilian to show what a good cop he is. And not just any civilian, either! It's Fatty! He kills Fatty! I wouldn't have thought a single bullet could bring that water buffalo down, but he manages to hit her in her forehead, where she only has three inches of pudge to protect her. Slowly but surely, the cops are killed off by the same four or five zombies who manage to keep popping up near the camera (movie magic!). Soon, the whiny officer is the only one left. He manages to fend off one zombie, but he gets really, really eaten by another. The munching and slurping sounds are louder than any of the gunshots, a problem that only gets worse as the movie goes on. And on. And on.

Since this is a cheaply produced horror movie, there must be a shower scene where the camera is aimed directly at the woman's breasts. That scene comes along now, as a woman decides that the best way to deal with the zombie menace is to take a breast-oriented shower while listening to the latest news on the radio. Unfortunately for her, a zombie breaks into her apartment and kills her. It is just impossible to take a shower in peace in the city. We cut to a man doing push-ups while also listening to the same radio broadcast. He decides to get in a shower, too. That's just a recipe for disaster in "Meat Market." He gets eaten by the girl from the previous scene, who is now a zombie. That was a pretty quick transformation from human to zombie. I'm sure glad nothing will come up later in the movie to prove that such a rapid change is completely impossible. Or will it? Yes, yes it will. In fact, it's stressed pretty damn heavily. What a piece of crap this movie is. At least this week's over.