Horror Stories from the Road

For most musicians on tour, strange situations are a daily occurrence; a result of traveling, meeting crazed fans, and spending time with other performers in varying states of sobriety. Sometimes, however, a day on the road goes beyond simple quirkiness and enters the realm of the truly spooky. In the spirit of Halloween, we present some of the most bone-chilling tales from the road.

In 1997, Sugar Ray were huge thanks to the success of "Fly." Hoping to lay low, hunky heartthrob Mark McGrath ducked into a small bar after arriving in Minneapolis.

Halfway through his second Roy Rogers, a woman took a seat at the far end of the bar. She was gorgeous, and she didn't recognize Mark. He was intrigued. After chatting her up for the better part of an hour, the singer asked for the woman's number. With a sly smile, she reached for a napkin and obliged.

McGrath looked at the number, and it was 13! Gasping, he turned to the woman and realized she was a black cat! Backing up and screeching, he then saw that he wasn't in a bar at all, but in a scary graveyard! He dropped his drink, and when the glass shattered it turned out to be a bottle of Zima!

While performing in Des Moines, Iowa in 1982, Ozzy Osbourne bit the head off what he assumed was a rubber bat. It was, however, not rubber at all. It was drummer Lee Kerslake. 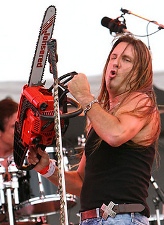 While performing "The Lumberjack" on stage, singer Jesse James Dupree produced a chainsaw, revving the engine in preparation for the song's distinctive solo. On this particular night, he decided to stand on top of a wobbly stool and brandish the chainsaw above his head.

You can imagine what happened next.

Halfway through the solo, Dupree suddenly became very aware of what he was doing, and recoiled in horror at what his life had become.

The antics of Mick Jagger and Keith Richards are legendary, but one frightening tale from the '70s puts the rest to shame.

After a night of performing and particularly heavy partying, the band checked into its swanky hotel. The manager attempted to warn them about the reportedly haunted top floor, but the Stones laughed it off, eager to get to sleep.

The following afternoon, the four men woke up in their bed at exactly the same time in their matching pajamas and stocking caps, as was customary. This time, however, something was not right at all.

There was something else under the covers, something large and warm at their feet. The Stones eyed one another nervously, each chomping on the fingernails of both hands at the same time as they recalled the manager's warning.

The tension mounted as they slowly lifted the covers. With one final tug, the men screamed.

There, on the bed, was a horse's decapitated body.

They had ordered a horse's head.

A ghost had changed the room service order.

One cold and gloomy night after a show in Cleveland, Green Day's tour bus shook violently, then came to a stop. The driver and band stepped out onto the lonely country road, certain they had struck something as large as a deer or perhaps a bear.

There was no sign of an animal, however. No, the truth was far worse. Billy Joe Armstrong dropped to his knees and buried his face in his hands.

They had run over the Earth. Everyone they loved was now gone, along with all their favorite places.

On the way to a Los Angeles show, Kanye West glanced out from the window of his private jet. Though it was night and a heavy storm cloud had enveloped the plane, Kanye caught a glimpse of an indistinct figure standing on the wing just as a flash of lighting illuminated the night.

He considered telling the pilot, but reconsidered. It had only been two days since Kanye told the pilot that he was a Jedi, and the wound inflicted by that lie had not yet been healed.

No, the only solution was to climb out through the emergency exit and investigate further.

Minutes later, Kanye made his way across the wing, the howling wind making his jacket flap slightly. At several points, he had to stop and adjust his shades. Though it was a difficult process, with each step the figure became more distinct. It stayed silent and still, seemingly content to watch his progress.

Finally, Kanye reached the figure, grabbing it by the shoulders as he screamed, "What are you doing here? What do you want?"

He squinted as lightning struck once again, revealing the other's face.

"What do I want?" West Kanye, his good twin brother, smirked. "Only what's rightfully mine."

"But you're dead," gasped Kanye West, "I saw you run into that rap factory moments before it blew up! I- I only took your music to honor your memory!"

"Yet no body was ever recovered." West Kanye flashed a sad smile. "Besides, I wrote that music to honor your memory. You died in the womb."