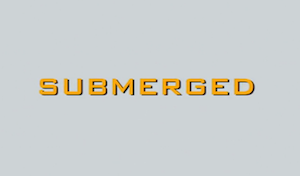 Overview: Well, according to IMDB, Steven Seagal is “Chris Kody, the world’s best mercenary”, who is “freed from prison...to stop a group of terrorists who have taken over a nuclear sub.” The only problem with that summary is that it’s completely wrong. Note to Steven: maybe make sure your publicist actually watches your movie next time before they write an IMDB summary of it.

The Case For: If your idea of entertainment is really bright solid colors, then good news, you’re about to have bright yellow and dark blue burned into your retinas forever.

The Case Against: Other things that will be burned into your retinas include a bad VR simulation of Hell, strobing zooms and jump cuts, and worst of all, extreme close-ups of Steven Seagal’s T-zone. 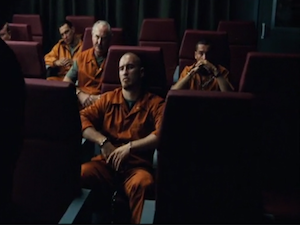 Submerged is, at long last, a Steven Seagal movie that delivers what we all wanted[1]: a thousand feet of insulating ocean water between him and the rest of society. There’s a reason all of his most popular movies took place on airplanes, boats, and high-speed trains, and it’s the same reason the good Alien movies all unfold in space far, far away from Earth - because the existential terror of watching Seagal lumbering around gets harder to enjoy if it feels too close to home.

If only Submerged was actually 20,000 Leagues Under the Sea with him as a beponytailed Captain Nemo who likes to slip out of the airlock and put sharks in chokeholds, maybe it could have risen to the relatively lofty heights of an Under Siege 2: Dark Territory. Too bad the submarine thing lasts all of twenty minutes, before we’re off to the next randomly chosen gunfighting setpiece.

In fact, Seagal and company’s inability to stay put on the submarine plays nicely into the overarching theme of Submerged, which is severe, untreated ADHD. Specifically, either a film editor who suffers from that, or a film editor/mad scientist who is running an experiment to see if he can induce it in the audience with an assault of unnecessary cuts, zooms, and whooshing noises:

It feels like we have to say this every time we watch a Seagal movie, but once again: we swear we didn’t edit this ourselves to ruin his sterling reputation for high-quality cinema.

Anyway, once they’re done with the submarine (which once again is neither nuclear, nor full of terrorists), our intrepid heroes go on to face the real villain: Jay Leno, Mind Rapist, who has developed some kind of subliminal mind control device. He has his sights set on conquest of the South-Central Euramerican nation of Genericzuela, which is most notable for El Presidente’s amazing rally posters, which he really needs to stop letting his nephew’s third-grade special ed class make for him.

As any action hero can tell you, the best and only way to deal with such a threat is to shoot everyone you see in the face, the end. So let’s get back to the real reason we’re all here: Steven Seagal. In fact, the only reason Seagal is here is presumably for himself, which is why he gets his own WWE entrance theme so you don’t forget he’s the badass star:

That clip also features Seagal’s own characteristic smug mumbling (smumbling?), now inexplicably missing half of the words for no reason. Or maybe “who dis?” and “where mah crew?” is his interpretation of how a prison-hardened mercenary would talk, possibly a mercenary who suffered severe blunt head trauma, but still. Either way, he becomes so incoherent that eventually Anthony Hickox wisely decides to randomly dub over Seagal’s lines with some other voice actor. If only they can invent dubbing that works on martial-arts moves, maybe Seagal can return to his glory days again.

[1] It’s possible that our perspective on this might be warped by the sheer number of Seagal movies we’ve suffered through.