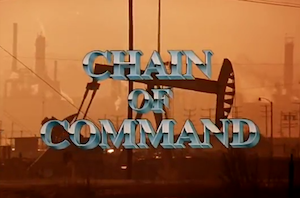 Overview: Grizzled veteran soldier/bored oil refinery guard Michael Dudikoff unravels a web of conspiracy and intrigue involving the takeover of the fictional oil-rich country of Qumir. Well, actually there’s no intrigue and he doesn’t “unravel the conspiracy” so much as he “shoots everyone in the country with akimbo M16s while diving backwards in slow motion” (which is much less entertaining than it sounds.)

The Case For: The always watchable R. Lee Ermey, whose bug-eyed presence brightens up any movie, even when he’s staring wistfully and blatantly at the off-screen cue cards he’s reading.

The Case Against: The plot to overthrow the Qumiri government is so nonsensical and involves so many different groups that it makes Alex Jones’ darkest fever dream about lizard people look like an Encyclopedia Brown mystery. Also, the whole “action lead, Michael Dudikoff” thing.

Chain of Command was ruined before it even got past page 1 of the script, when they set it in the fictional country of “Qumir”. Qumir is the kind of made-up name that you might try to convince other people is real in a desparate attempt to win at Scrabble, but nobody would ever buy it. They might as well have called it “Fakeistan”. Or maybe that’s the point, because Qumir is certainly a nation of ridiculous bullshit. The political intrigue is ridiculous and fake, the night is of the fake blue-filter variety[1], and the gunplay would make Steven Seagal step back and go “whoa, hang on guys, that’s way too absurd and over the top for me”:

It’s hard to choose an un-favorite out of that, but The Dudikoff wildly flailing around with akimbo M16s and instantly killing 30 guys and a fuel tanker is pretty insane even by the most mindless action movie standards. On the other hand, that guy whose colossal hair is a navigational hazard for light aircraft has some pretty good one-handed shotgun tricks. Or maybe extreme, gratuitous, inexplicable slow-motion is more your speed?

Most of these problems are definitely squarely in the lap of David Worth, but it doesn’t really help that our old friend Michael Dudikoff is anchoring the cast as action lead, in much the same way that a 3,000 pound iron boat anchor leads a rubber life-raft down to a watery grave. His boyish attempts at charm and general air of goofiness don’t exactly mesh with his war-weary ex-special forces character.

On the other hand, it would be hard for anyone to mesh with a character that whipsaws between Diet James Bond Zero (complete with lame attempts at wordplay), Middle East Macgyver (making his own Molotov cocktails and killing a man with an unbroken pool cue), and the akimbo M16 guy we saw before. He also has a strict moral compass, except that when he’s given the standard “shoot your love interest to prove your loyalty” test by evil oilman R. Lee Ermey, Dudikoff happily points it right at her and pulls the trigger. We’d love to hear the conversation the two of them had after that when they fly off into the sunset. “No, no, I definitely knew it wasn’t loaded dear, you see...uh...I could feel the weight of the missing bullets? Would you buy that?”

We’re not even going to attempt to describe the plot of Chain of Command. On a very basic level it’s about an oil company taking over Qumir by installing a puppet president - a plan which is lovingly detailed in evil_plan.doc.xls, complete with the laziest fake computer reports ever. That’s all well and good, but the details involve a terrorist group (or possibly freedom fighters), the U.S. ambassador (or possibly a Division III basketball coach), some random mercenaries (or possibly a sentient pile of hair), the CIA, Mossad, and probably even more sides that we’ve forgotten all double-quadruple crossing each other and running false flag operations under each other’s names. It’s not deep and nuanced political intrigue so much as it’s a drunken 3AM bar brawl, except nobody is drunk (except the audience.) Speaking of which, it’s time to erase our memories of this movie.

[1] Most people who go for the blue-filter option at least go to the trouble of not using it on scenes involving explosions and fires to make it extra goddamn obvious how fake it looks, but David Worth is a man of consistency.