Why doesn’t the alien kill Gibbons right off the bat? Why doesn’t it lead him in the room and jam its gigantic tentacle self through his body like it did all the scientists? Nobody is sure, but one thing is certainly true: We all suffer for it. After performing one of the most awkward strip scenes ever caught on tape, the alien kills him. Apparently the rest of the crew just forgets about him like the audience is supposed to, and they split up to find the oil rig’s missing staff.

But here’s the biggest question of all: How the hell did the alien get off the ship that blew up and onto the oil rig? In fact, how did the whole lab, which was clearly shown as being in the ship, appear in the oil rig with it? Continuity is second only to naked women in a Hellfire Productions movie, but they can’t seem to do either right.

Of the rest of the crew, only two remain that have obsessions interesting enough to pique the alien’s interest. Those two crew members are given their own death scenes, while the remainder of those who die are simply found throughout the ship with various poorly-done puncture wounds.

Cassidy is, of course, obsessed with the Old West. I don’t know why a wannabe cowboy would be interesting in working on a paramilitary ship, or why he would dress in full western gear while serving on the ship, but I guess that’s why I don’t work for Hellfire Productions (that and I didn’t feel the need to stop my education after the sixth grade). While searching the ship with Dixon – a character so uninteresting and useless to the plot it wasn’t necessary to mention him until now – he is haunted by the sound of horses’ hooves. He looks in one of the rig’s many, many doors and finds (surprise) a frontier town on the other side of it. And then he walks in. 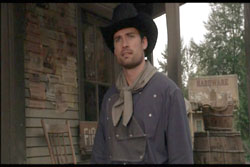 "Yeah, there's an Old West town in the middle of this oil rig. No, why would I question it? Who you calling a retard?"

Here’s the thing. Gibbons saw a stripper on the rig. He followed her and he died. That’s fine, I guess. But when you’re seeing full-blown Old West trading posts on oil rigs and believing they’re there, you’ve got a serious fucking mental deficiency. Cassidy, of course, jumps right into the fray and gets in a gunfight with some guy for absolutely no reason. He shoots the guy dead and then (surprise again) gets a tentacle shoved up his ass by the alien.

Mel, the punk-rock girl, meets much the same end. Apparently she is rebelling from society because she lost her husband and child in a car wreck, and she ends up finding the train wreck scene in the ship. She meets her long lost family by the wreckage, but something inside speaks to her. Something that says hey, I realize I’m seeing a gigantic train wreck in the middle of an oil rig, and maybe something isn’t right about that. Unfortunately, after a riveting scene where she points a gun at her dead child and mumbles some dialogue, she, too, meets a boring end by way of the cel-shaded tentacle.

After the last two important characters die, we find out that the government dude is on the ship to recover a disk full of alien data, and he shoots Anna’s husband (who magically appears even though he supposedly blew up on the ship) to get it. Afterwards that same suit gets into a fistfight with the alien, and then dies, giving the survivors a chance to get upstairs. Taking a cue from videogames everywhere, they find a stack of dynamite laying out, unsecured, and they ignite it, jumping off the ship in slow motion right before it explodes.

But, of course, all’s not well at the Sea Ghost Oil Rig. The three survivors find their way back to their small boat, where they sail away into a beautiful computer-generated sunset. Jack gloats that he captured the disk from the suit before he was killed, when what do you know, the alien (who has now survived two explosions) shows up aboard the ship and rattles off some snappy one-liner. Roll credits.

However, if I wanted to watch a nonsensical, trite, septic clump of a movie, I would certainly not hesitate to rent another one of your films. Please bear this in mind before you drive to my house in your cherry red Trans-Am and kick my ass.