EXPECTATIONS: Not long ago, I came to realise that remakes were, in fact, a good thing. However, many people disagree, claiming all films are of their time and should be only ever be assessed as such. I think that's precisely why really important films need to be remade for a new generation of filmgoers. Like Footloose, for example. 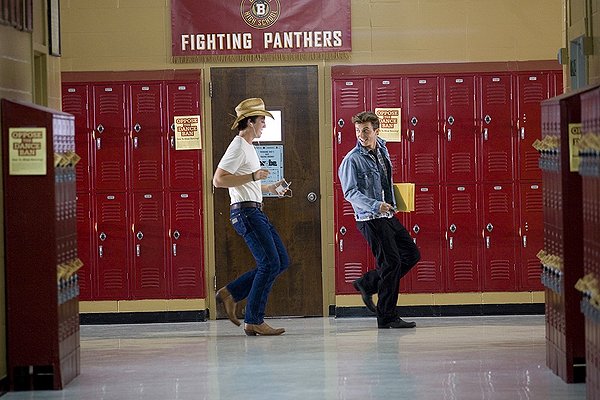 Let's hear it for the movie!

REALITY: Whenever anything gets remade, people are always clamouring to ask why. Why remake this? You're ruining our childhood! Even a lot of critics who have expressed a liking for this new version of Footloose have questioned the necessity of its production. To put it bluntly, declaring this remake unnecessary shows a complete misunderstanding of the messages of the original film, which are only strengthened and enriched by the very existence of this technically better yet occasionally bizarre revisiting.

After the death of his mother, young Boston city-dweller Ren McCormack (Kenny Wormald) returns to his childhood home of scenic Bomont to find that dancing - his favourite pastime - has been outlawed thanks to Rev. Shaw Moore (Dennis Quaid). Trying to keep his head down and fly right, he runs into trouble in the form of the Reverend's rebellious, thrill-seeking daughter Ariel (Julianne Hough), but he soon finds that there may be a heart of gold beneath her bad-girl exterior. After a few scrapes, he decides to turn the town on its head and convince the powers-that-be to lift the dancing ban before the school year is out. 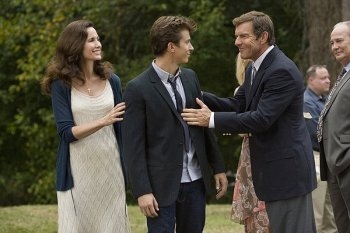 Oh shit, Dennis Quaid is going to hug me. This is awkward.My initial reaction to Footloose was a very positive one, yet I was a little disappointed that it had remained so slavishly faithful to its predecessor. Then, suddenly, it dawned on me that that was the entire point. Footloose communicates its messages clearly enough on its own, but it becomes a much more succinctly brilliant animal when viewed within the context of its relationship to the 1984 film. Both its many similarities and the often surreal deviations and additions (such as the explosive bus race of death) are so carefully calculated as to breed familiarity in its older audiences and provide new thrills to the kids. It is a parent/child relationship, bearing all the similarity that comes from the gene-pool, but striking out on its own and doing its best to rebel against the expected norms. Consider the infamous angry warehouse dance that saw Kevin Bacon improvising trapeze jumps and flipping through the air. Wormald's performance feels much more personal, much more angry and nowhere near as ridiculous, but it still feels familiar and correct.

Another good example of what I'm talking about here is in the soundtrack. The iconic titular song (originally by Kenny Loggins, countried up a bit here by Blake Shelton) bookends the film with entertaining aplomb and pleases the characters in the film as much as it does its audience. This suggests we are watching a world wherein Footloose is a film that never existed, but the soundtrack to Footloose was released just this year and holds pride of place in the iPod playlists of America's youth. The best example of this effect is the "learning to dance" montage featuring Ren's good friend Willard (here portrayed brilliantly by Miles Teller, and originally by the late Chris Penn). Instead of some incredibly modern piece of dance music, we are treated to Jana Kramer's relatively faithful cover of Deniece Williams' "Let's Hear it for the Boy," even though the visuals are much more fitting to a young man in the modern age. 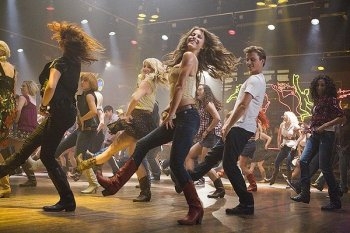 A nightclub with linedancing where nobody is drinking? Only in Footloose!What you have to realise is that if you saw this film back in the day and connected with it, you are no longer Kevin Bacon in Footloose. Hell, Kevin Bacon isn't even Kevin Bacon in Footloose anymore, he's the desperate father from Death Sentence, trying to connect with his sons while he still has the time. In the same way, the 1984 Footloose is the cool-yet-distant father to this new incarnation. One day, after Footloose '11 comes home late reeking of alcohol, Footloose '84 turns to him and says "I know what you're going through, I did some crazy shit when I was your age too."

"Oh yeah?" comes the rebellious snort of the defiant youth. "Did you ever blow up a bus?"

For a film that was always about bridging generational gaps through the gift of communication, the sheer fact that a new generation has a Footloose of its own and that both versions have a great deal of common ground to connect them means that the original goals have a new chance of being fulfilled. They're not going to save the world, but they might get some people to have a bit of a chat with their dads, which is rather beautiful in a way.

MINORITY REPORTS: Who are these people and what have they done with my Footloose? Dennis Quaid, fresh from his risible turns in Legion and Soul Surfer, and some kid called Kenny Wormald are poor substitutes for John Lithgow and Kevin Bacon; even Craig Brewer can't pull this one out of the shitter. One can only hope he took this job to bankroll a more personal project. - Sean "Keanu Grieves" Hanson

I hope this trend of remaking '80s teen movies continues. I'd like to see a remake of The Breakfast Club that explores the fact that Brian would have been expelled, arrested, and forced into psychiatric help for bringing a flare gun to school. - Martin R. "Vargo" Schneider