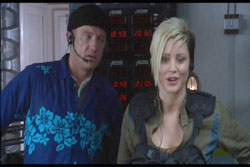 Nobody knows why she's smiling. It's kind of like the Mona Lisa except there's a lot less talent all around.And then, the ship explodes. I’m not sure if there’s an explanation behind it or not, since after all the scientists get axed there’s more military jargon and then a few shaky camera shots before the explosion. In any event, I can assure you the movie doesn’t make any more sense past this part.

Cut back to the “military warehouse.” Our two suits are unhappy about the sudden disappearance of the “USS Semanza,” which we can only assume is the ship that just blew up. One of the suits gets on a red phone to speak to the president (we can only assume the president is a reformed, hard-drinking old war general who really has a heart of gold). The suit hangs up the phone and lets us know that “shit’s going to blow like fireworks on the fourth of July” before the scene switches to the “Sea Ghost Oil Rig.”

Alongside all the other things it doesn’t have, the movie is also severely lacking in subtlety. When an oil rig is named “Sea Ghost,” one can only assume people would want to stay away from it. Personally, I would visit a place like that as quickly as I would set foot in “Get Your Balls Chopped Off and Shoved Up Your Nostrils Sanitarium,” but maybe that’s just me. However scary the name is, though, we quickly learn that a group of renegade sailors with nothing to lose and everything to gain plan to breach the rig in their rickety old boat.

The sailors are as hackneyed as the dialogue. Alongside the aforementioned cowboy (Cassidy) and punk-rock girl (Mel), we are met by a straight-laced but not overly practical black woman (Anna) and an off-the-cup captain who holds his crew together with his unorthodox tactics (Jack). Also on the ship is Dean, a government official who looks like Agent Smith from the Matrix with about twenty pounds of collagen pumped into his forehead.

After another fifteen-minute interval during which almost nothing happens, the sailors find themselves upon the Sea Ghost. Again, the art department has shown exactly what two people with Windows 95 and an outdated copy of Bryce can do, since the exterior shots of the rig are blatantly ugly and fake. The CGI shots are blurry, grainy, and static. They are so fake, in fact, they look almost exactly like the CGI cutscenes from the 1998 PC “Monopoly” game – during every shot, I half expected a silver car to drive by, pick up a bag of money, then drive away in a cloud of dust as dollar bills floated over the screen. 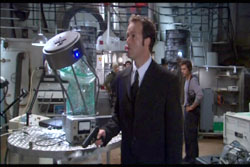 If you look closely, you'll see that the set designer decided to tape an old scientific calculator to the top of the smashed container. Somehow that sums up the whole movie for me.

“The Thing Below” is fairly long for a horror flick at an hour and 34 minutes. Maybe 30 of those minutes involve some kind of action. This wouldn’t be bad if the remaining time featured some sort of interesting content. Of course, the people at Hellfire Productions wouldn’t understand an interesting unless it was written in the liner notes of an AC/DC album, and then they probably wouldn’t understand half the words. A solid hour of the movie is uninteresting, garbled filler that doesn’t do much but manage to complicate a fairly simplistic story.

As far as action scenes go, though, the one following the crew’s entry is a real winner. The audience learns that the tentacle monster/alien/fridge drawing isn’t only a killing machine: It can also read minds and shapeshift. This particular tentacle alien apparently enjoys turning into naked women.