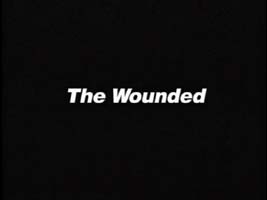 Overview: A racially diverse group of convicts have to use the power of teamwork and the lessons of a mullet-wearing prison counselor to fight off a Mexican gang and a backwoods death cult.

The Case For: The lack of any real conclusion whatsoever to the main plot leaves a number of questions up in the air, encouraging the viewer to use his or her imagination to fill in the blanks. Anything is possible if you can imagine it!

The Case Against: There is absolutely no way to look at this movie as anything other than a waste of an hour and a half of your life. Really. I tried.

The plot summary on the back of "The Wounded" describes it thusly:

A group of youngsters take survival lessons from a prison counselor named Taka when the murder rate in their neighborhood reaches an alarming high of six per day. When Taka decides to test his proteges' newly acquired skills at a remote forest retreat, the group comes face to face with a death cult. Bella, the cult's leader, kidnaps Taka and some of the group, and the remaining few must apply their new survival tactics just to stay alive.

That's completely accurate, as long as you remember to omit every word beside "Taka," "cult," and "the." This movie is a complete waste of time. The actual plot described above doesn't even get going until a full hour into the movie. So what is the first hour? Training montages, mostly. Oh, and also some tension between racial stereotypes. "The Wounded" doesn't teach any lessons, doesn't deliver any message, doesn't tell much of a story, and barely manages to talk its way out of its own ill-conceived plot. The fault for this spectacular failure, which was made in 2003 but looks like something out of 1989, rests entirely on the shoulders of John Azpilicueta. I'm not kidding about this. He bills himself as the film's writer, director, producer, executive producer, and editor, so when I say it's all his fault, I mean it. Let's take a closer look, shall we?

Troma distributes two kinds of movies: ones that are intentionally bad and therefore become excellent, and ones that are just shamefully bad. In either case, Troma likes to preface its releases with an introduction of their own making. I won't get into the details of this intro, but suffice it to say it involves pregnant shemales. That is to say, of course it involves pregnant shemales. Luckily, the actual movie does not include anything of this sort. That was the last time you'll ever see me use the term "luckily" to refer to something included in "The Wounded." From here on out, it will be more along the lines of "For the love of all that is holy and good in the world, I can't even begin to imagine what John Azpilicueta was smoking when he decided to include (insert cinematic failure here)." 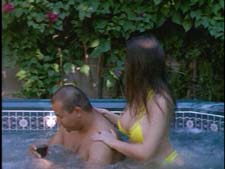 Yeah, keep soaking it up, fatboy. You'll get yours.

"The Wounded" begins in earnest with a chubby Latino in a sports car pulling into the driveway of a nice house. He goes around back and soaks in a hot tub with a gorgeous, large-breasted woman who gives him wine and a massage. Then he has sex with another woman. This guy's life is pretty damn sweet, but alas, it's all a dream. He is awoken from his slumber by his mother nagging him to go out and get a job. The chubby guy only follows half of his mother's advice. He does go out, but instead of finding a job, he tries to rob a liquor store and fails spectacularly. When he pulls out a gun, the store owner bashes him over the head with a bottle, then unloads a shotgun into his stomach. The blood splatter is comically bad, which serves to distract from the fact that this part of the movie has absolutely nothing to do with anything else that happens at any point.

We cut to a mustachioed man sporting a shapely mullet. This is Taka, the world's nicest badass. He can fight, he can shoot, and above all, he can love. He can also get bitched out by his boss, apparently. His boss doesn't like Taka's ideas about rehabilitating prisoners, which is sort of odd, since that is Taka's sole job. One would think that if the prison management believes that inmates can't be rehabilitated, they wouldn't bother keeping somebody like Taka on the payroll. The arguing between Taka and his boss is a recurring theme in "The Wounded." It has absolutely no impact on anything whatsoever. Yay. 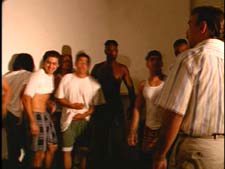 "Darn it, ladies, if you can't organize yourselves into a simple line, we'll never be ready for the big recital!"

Taka can do many things, but he sure as shit can't narrate. Sadly, that's precisely what he attempts to do. As we see shots of a busload of convicts arriving at a prison, Taka whines about how murders are bad and people shouldn't kill one another. He sounds sincere, but the problem is, I keep expecting him to end every sentence with "Da Bears!" The inmates are taken into a room full of bunk beds, much like an army barracks. Yep, somewhere around sixteen convicted felons bunking together in one large, open space. Just like in real life. They immediately split into groups based on race. The white guys hang out together, the black guys hang out together, and the latinos hang out together. Don't expect to get too attached to any of the characters. I think John Azpilicueta specifically designed this script to avoid ever referring to the characters by their names. One of the white guys is names Danny, which I only know because he refers to himself in the third person constantly. From the credits, I can tell you a couple other names. Mario and Cartoon are two of the latino guys, and one of the black guys is named Noah. None of this really matters, but I just can't bring myself to spend an entire review just talking about "black guy #2" and "Mexican guy #4" without feeling like a racist. There's also one random Asian guy, but he doesn't count.

Before you can say "racial tension is a convenient plot device," a fight breaks out. Taka storms in and breaks it up with his amazing ability to fight off a room full of violent criminals in peak physical condition which he derives from his knowledge that teamwork is awesome. Or something. I don't know. After introducing himself (and for the record, he doesn't call himself "Taka." That nickname never gets used until about three-fourths of the way through the movie, but who's counting?), Taka splits up the inmates into pairs. Amazingly enough, most of the pairs are interracial! Can you imagine such a thing? Why, being forced to work together like that might make the pairs see beyond their racial differences and finally accept one another as human beings! That's just preposterous! How incredibly unpredictable! If only every other movie featuring interaction between black people and white people had used a similar device, I might be prepared for this culture shock! Oh wait... 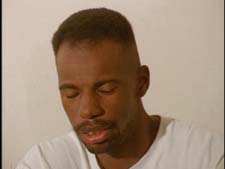 "When I found out that Chantal used my toothbrush, I felt violated. It's like, why can't people just respect each other's personal space, you know?"

Taka is not just there to break up fights. He's also their teacher. He leads them in discussions on societal issues to try to determine why it is they went bad and what they can do to get back on the right path. Whenever one of the inmates answers a question, the camera switches to a Real World-style close up that makes me expect to hear something like, "When Puck left that hair in the peanut butter jar, I think he was trying to say he hates me because I'm black, and that makes me sad, you know?" To make up for the immense girliness of the chat about feelings he's making them endure, Taka promises that if they'll just behave themselves for several months, he'll take them out on a field trip for an afternoon to play wargames. That's sort of like saying, "Give me your house and car, and in a few months I'll let you sleep in the cardboard box my plasma screen TV came in."

Taka also helps whip the guys into shape. He drills Noah on the same one kick over and over again. Some people might say that could be considered foreshadowing. I say that applying any literary terminology to this movie is giving John Azpilicueta way too much credit. In addition, Taka teaches the inmates some basic math. I understand that these characters are supposed to have dropped out of school and grown up on the streets and such, but Azpilicueta goes miles out of his way to force the point that they're all dumb now. For instance, after explaining why three squared is nine, Taka asks if anyone can guess what three cubed is. Mario replies, "Is it also nine?" Taka genuinely calls that a good guess. No it's not. It's a shitty guess. You don't need to know much about raising numbers to various powers to be able to figure out that of all the things three cubed could possibly be, nine is way, way down the fucking list. 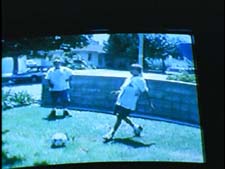 In case this picture is hard to see, yes, those are fat kids. Fat, fat kids.

Danny and Noah, who are paired together, spend some time working with Taka to develop computer skills. Noah is a whiz, but Danny struggles with the machine, much like he struggles with pronouns. I have to imagine most of his difficulty stems from typing "Danny wants open windows" into the DOS command line. Noah shows him up on the computer, but Danny gets his revenge by whooping him in a game of basketball later on. In real life, Danny would have stabbed Noah to death with a sharpened toothbrush, but hey, this is just a harmless fantasy anyway. While Danny and Noah play basketball, some of the other inmate comment on the game from off camera. This technique of having people speak and never showing them on camera becomes a motif. The characters are all so bland and stereotypical to begin with that it almost doesn't matter who's speaking anyway.

Taka makes an inspection of the bunks, checking for cleanliness. When he finds a layer of dust on one of the beds, he declares that no one will receive any dinner. The inmates respond by chanting "bullshit" over and over again. It's the first time they actually manage to do something as a group! It's touching, really. Of course, in real life, they would have beaten the guy whose bed was dirty until his eyes popped out of his skull and he shat himself, but there you go.