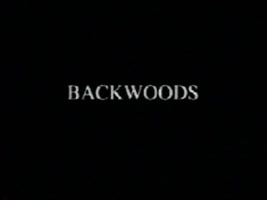 Overview: After a group of rowdy teens run over his man-woman mother, a 300 lb. retarded transvestite redneck goes absolutely ripshit on basically every other character in the movie.

The Case For: The fact that this movie exists and that I have seen it means that I have atoned for whatever sins I may have committed in a previous life.

The Case Against: Well, it's basically a failure on every cinematic level. That seems like a fairly solid case against.

How do you review a terrible movie if the point of the movie is how terrible it is? The answer, my eager young friends, is with a smile on your face,a spring in your step, and a whole thesaurus full of interesting curse words at your disposal. Simply stating the premise of this movie aloud is enough to cause an entire hospital wing full of babies to burst into flames. So what we've got here is a no-budget horror flick to end all no-budget horror flicks. It is a clear parody of the genre, and some might say it's a pretty good one, too. The thing is, the camerawork and production values are so piss poor that it becomes too difficult to watch for humor value, in essence becoming a parody of a parody of a no-budget horror flick. And a parody of a parody, like a double negative, means that all the parodies cancel each other out, and what are you left with? That's right, a no-budget horror flick. Specifically, a no-budget horror flick about a giant hairy retarded redneck who happens to be a transvestite for no real reason. I'm simultaneously delighted by the comedic aspects of this movie and horrified beyond all capacity for bodily functions by the fact that someone even put together this premise. So with that duality in mind, allow me to present the awesome genius/lung-shriveling stupidity that is "Back Woods!" 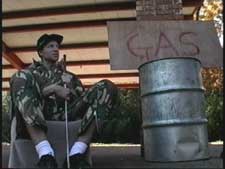 Since they are horror movie teens, they are naturally all drunks and stoners who travel around in a van with no seats, which are surprisingly easy to come by in horror movies. Of course, they are in need of gas, but conveniently enough, there is a gas station right there! And by "gas station," I mean random open structure with a cardboard sign that says "gas." The station is attended by a lone camouflage-wearing, golfclub-toting, whiskey-swilling hick by the name of Crazy Al. Crazy Al is basically what you'd expect if Woody Harrelson and Billy Bob Thornton's character from "Slingblade" jacked off into the same pool of radioactive goo. Crazy Al informs the teens that they in fact have no gas, but he can tell them about the woods, and that's almost as good. It's a remarkable thing about folks in horror movies. They may not be able to provide the simple, basic services that they're there for, but I'll be darned if they can't tell you about the local geographical anomalies. And where there's a hick willing to provide seemingly irrelevant information to teens who didn't ask for it, there's a cop. Sheriff Taylor pops out from behind a column to offer further explanation as to the nature of the woods and the story of Luther the super baby and his hermaphroditic mother.