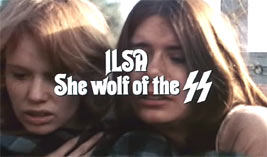 Overview: It would be difficult to think of a premise more repulsive than the one around which "Ilsa: She Wolf of the SS" is based. The film is a brutal depiction of daily life in a concentration camp where medical experiments are conducted. The catch is that they are medical experiments that usually somehow relate to bizarre sexual torture. Did I mention that the head of the camp is Ilsa, an aging blond SS dominatrix with a nymphomaniac bent? If you're in the fortunate group of people who have never heard of this film let it be known that it is about as sexy as walking in on your grandpa giving himself an enema. If you're still not convinced, there is a scene in which Ilsa weeps while urinating on an SS general's chest, in a dining room, that's decorated with hung Jewish women. Keep in mind that this movie is technically not pornography, although I wouldn't consider it of a higher class than say, a movie about freezing turds and using them as dildos. I hope my review of this film can dissuade you from ever wanting to see it, because honestly it makes "The 120 Days of Sodom" look like "Bed Knobs and Broomsticks".

Gone are the days when a woman as marginally attractive as Ilsa could be the star of what amounts to a high-budget porno. "Ilsa: She Wolf of the SS" opens with one of the most disingenuous dedications in the history of cinema. A red card with white text appears while a recording of a Hitler speech plays in the background. The text claims that the movie is "based upon will never occur again". Bold words for what amounts to a jack-off movie about a concentration camp! The dedication rings about as hollow as something similar would placed on the loading screen of a video game called "Einsatzgruppen 2: The Jew Uprisings" where you herd groaning Jewish prisoners into a gas chamber by bludgeoning them with rifle butts. I'm sure there would be a jumping puzzle involving mounds of emaciated corpses, but even the joy of a corpsepile jumping puzzle wouldn't make a dedication like that seem heartfelt.

The filmmakers work hard to immediately dispel any lingering suspicions that they might actually mean their dedication by opening the movie with a bizarre sex scene. Ilsa is humping someone on her vintage 1970s hot pink silk tigerstriped bed sheets, but begins crying as she realizes she is going to leave the session unfulfilled. After collapsing on top of her lover, and despite the fact that she had been moaning moments earlier in perfect American English, she groans "You should have vaited". Feeling a little too dirty, Ilsa decides to shower her breasts. She has one of those showerheads on a hose type arrangements and she basically only washes her breasts, in close-up, for a couple of minutes. Then we find out the grinning and moaning man she was riding like a wooden pony is actually a Jewish prisoner of the camp. His failure to satisfy her presumably relegates him to the aforementioned corpsepile, despite Ilsa's promises to keep him around and out of the torturous experiments she's been running.

Bad job in the sack there buddy. I should mention at this point that Ilsa is naked in this film a lot and even though she has a reasonably good body she reminds me of a grandmother. It's not even that she's all that old, maybe her forties, but a combination of the hair and the stern expression she usually has on her face just smacks of "grandma". To tally that up to this point, this is a movie about an evil Jew-raping grandma who tortures people to death and pees on soldiers. Got that? Just making sure we have everything straight on this one in case you somehow forgot that this is the worst movie ever made.

Following the opening lovemaking sequence and Ilsa's brutal appraisal of her partner's skills in bed the opening credits roll over scenes of German soldiers guarding a truck full of female prisoners being brought to the camp. When things return to Ilsa she is dressed in a white surgical smock explaining to her suitor that once she's had her way with a prisoner he will "know only the pain of the knife" from that day forward. She orders her two assistants, who are wearing a combination of surgical gown, bikini, and blood, to proceed with the man's castration. I realize it's during a time of war and all but you would think a stodgy organization like the SS would have some sort of code of conduct about not wearing underwear in the operating theater. Thankfully the movie shows barely more than blood flowing down a cleaning channel during the operation, but the guy screams believably as Ilsa saws away with her back to the camera and explains melodramatically how a doctor in Berlin collects Jew dicks to prove their racial inferiority.

Yeeeeowch! The procedure completed, Ilsa oversees the arrival of the new inmates at her camp while bitching about the government that wastes her time with sterilizing women when she should be pursuing real research. You know, like screwing guys and then having the SS bikini squad cut off their cocks. Most of the new arrivals at the camp are exceedingly healthy looking and some of them are even well-dressed, leading me to wonder where exactly the Nazis are supposed to be getting these people. Wherever they get them, Ilsa sets up a very Nazi Christmas Greeting for them with a table, guards, and a big Nazi flag in the background. She then calls them up one at a time to stand naked in front of her for no particular reason before sending them through one of two doors. One door leads to a labor camp, the other door leads to a sinister pubic hair shaving station.

The first woman to receive a shave as close as her blade doesn't get her money back and instead has a shaving cream freakout as the gravel voiced Genital Shaving Unterscharfuehrer spends about five minutes lathering up the woman's groin. The woman starts crying and pushes the shaving maven aside and tries to make a run for it, but gets knocked the fuck out by one of a pair of evil female SS guards. They yell and vamp about assigning her to "work detail in the guard hut".