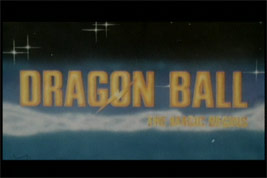 Overview: If you're among those who thought nothing could be worse than episodes of the unfortunately popular anime import "Dragon Ball Z" then I have to break some bad news to you: the live action movie is much worse. Imagine something that looks like it was filmed in the 1960s that features casting, costuming, and special effects straight out of the Z-grade 1980s. Surgically remove all acting and plot, and inject 500ccs of bonkers kung fu action and you'll have a pretty good idea of what this movie is like.

The Case For: You are working on a cultural anthropology thesis on the great gasoline-filled yurts of the Far East.

The Case Against: It is demonstrably worse than watching three episodes of the Dragon Ball cartoon. That's right, it is that bad. 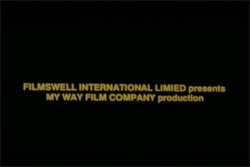 When the film's production company can't spell its name correctly you know that you're on a ship setting sail for the Quality Archipelago.When you base a live action movie on a cartoon that consists of two kids with giant hair staring at each other and screaming for ten minutes and then shooting mystical fireballs you can abandon all expectations of a quality storyline. What you're left with is the hope that your movie reflects the shallow plot of the cartoon in a much more real non-cartoon format that kids will find enthralling. What you end up with in the case of "Dragon Ball: The Magic Begins" is a film-long introduction to a series of goofy characters, painfully awkward wire-fu sequences, lots and lots and lots and ridiculous lots of explosions, and a seething undercurrent of rape. Yes, that's right, half of the kid's movie is about perversion and rape. This is Japan, after all. The country where eating breakfast or driving to work somehow includes rape.

The film begins in what appears to be a large village in Vietnam, circa 1968, complete with hundreds of people wearing pajamas and big straw hats. Everyone is gathering in a temple so that the monks in the prison work crew robes can hand over the "dragon pearl" to the "Town Chief". The Town Chief arrives, looking like a greased down Asian version of Tom Selleck accompanied by his cadaverous wife. There is an abridged ceremony that makes clear we are all supposed to care a whole hell of a lot about this guy and his precious dragon pearl. Just as it seems the village could not possible get any happier without bursting into showers of confetti and candy there is a high pitched screech and four cardboard shoes swing overhead. Oh no, it's King Horn and his legion of poor man's Storm Troopers.

The shoes swing back and forth over the village with the help of a blue screen and comically overdone pyrotechnics burst hut after hut in the village as the villagers run - or walk depending on how hard they are "acting" - in a panic. This sequence is a pretty decent microcosm of the entire movie as you get to see the hideous special effects you can expect throughout the film, terrible acting on a grand scale, and the dramatic misallocation of budget on explosions. Not even Schwarzenegger's "Commando" or Jackie Chan's "Supercop" can claim more thatched huts destroyed by explosions, and that's in Dragon Ball's first three minutes. 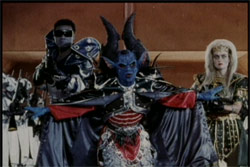 This screenshot from Kraftwerk's video for...oh, no, this is King Horn and his goofy henchmen.The village soon suffers a fate far worse than aerial bombardment by shoes when it is invaded by a New Wave music video filtered through a Cybermen episode of Dr. Who. In fairness to Dragon Ball, the silver and white-frocked knockoff storm troopers don't look quite as bad as most Dr. Who bad guys, and they did manage to get hundreds of them. Leading this invasion is a buff guy with poorly applied gray face paint, a futuristic suit, and grandma sunglasses. At his side is a crazy-eyed woman in a blond fright wig who looks like she is trying to massacre the village by shooting it dirty looks. We learn much later that these two are named Zebrata and Malila respectively. This pack of rogues marches around exploding huts and gunning down surprisingly calm townspeople for a minute or two. In the meantime the Town Chief and the monks pray for something to save the dragon pearl.

Alas, the esteemed Town Chief's prayers go unanswered and the dynamic duo blast their way through the last few huts standing between them and the dragon pearl. When they spot the monks and the Town Chief praying they summon their master from his command position in one of the flying shoes. He beams down into the temple with a special effect sure to make Buck Rogers serials jealous. His name is King Horn, no doubt a clever reference to the giant vagina-shaped formation of horns on his head, and he demands that the Town Chief hand over the dragon pearl. The Town Chief threatens to destroy it by throwing it on the stone floor of the temple, but instead of following through he tries to escape using the prison monks as a human shield. King Horn is having none of that and shoots lightning at all of them, killing them all instantly.

King Horn scoops up the dragon pearl and plucks a second out of his ridiculous costume, marveling at the fact that he has two now and is that much closer to having seven. Yes, math is fun. King Horn doesn't really bother to explain why he wants all seven or what will happen if he gets all seven, but I'm sure it's something really awesome. Something totally worth blowing up a lot of thatched huts for, anyway.

Meanwhile, a grandfather and grandson team of wacky-haired super monks are hanging out in their temple home in the woods. I think it's supposed to be the same planet as gasoline yurt village. The grandfather, who resembles a cartoon owl, explains to his young grandson that the two family treasures are their dragon pearl and their magical pole. Ensorcelled dick jokes aside, the magic pole is a magic-wand like staff that can lengthen to a full sized staff or even extend much farther with its incredible magics. The dragon pearl is, well, it's a paper weight made out of Lucite just like the other ones we saw. I should take a moment to mention that the grandson so closely resembles adorable "Tootie" from the Facts of Life that Mrs. Garrison probably has a case for copyright infringement. It's uncanny. 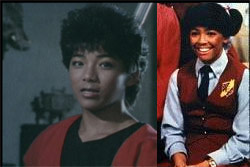 You take the bad, you take the bad, you take the bad, and there you have Dragon Ball...The Draaaagon Ball.Gramps decides that he needs to duke it out with Tootie to prove that the boy/girl has it in him/her to protect the magic pole and the dragon pearl. A madcap wire fu battle ensues that involves flying around, turning into energy and burrowing under ground, projecting energy balls, and feigning death by well. Tootie wins the match by faking his demise in the well outside and then, when gramps goes to make sure he's okay, bursting out of the well on wires and punching gramps in the face in the process. Grandpa goes flying through a tiny window in their temple and comes out with a clay pot on his head. Tootie breaks the pot open with his magic pole and grandpa literally sees stars. They even manage to mess up this special effect.

A rematch in paper-rock-scissors decides that Tootie has to go catch dinner for them. He offers to catch lion or tiger, but grandpa is sick of eating predatory cat, so Tootie promises to catch a fish for dinner. When grandpa asks what kind of fish, Tootie replies "a crocodile" much to grandpa's consternation. Sorry, gramps, but that's just how a nigga gotta choke a bitch.

Tootie leaps off into the woods in search of food. After flying around for a minute or two like a tiny homosexual marionette of Superman, Tootie grabs some bananas and takes a break to feed them to monkeys. Nothing kills time like footage of monkeys fighting over bananas! After enjoying the ape frenzy, Tootie heads off to a waterfall where he confronts one of the least convincing fake crocodiles seen since rubber was invented. It floats menacingly towards him and then floats menacingly around while Tootie props its maw open with the prized family magical pole. He then floats it out of the lake and slings it over his shoulders like it weighs no more than twenty pounds, probably since it obviously weighs no more than twenty pounds.

While carting the crocodile back to the temple in the woods Tootie is nearly run down by a jeep being driven by a clean cut female version of Indiana Jones. Assuming Indiana Jones wore hot pants and relied on ping-pong balls taped to a remote control to find treasure. Tootie threatens to fight this interloper and the strange metal beast she is riding, but the woman, who introduces herself as Seetoe, explains that it's a jeep and she is searching for dragon pearls. She further explains that she is a woman, a concept that initially confuses the very sheltered Tootie. Then Tootie recalls that women have bigger chests and asks to see Seetoe's chest. She refuses and when Tootie grabs for her chest she screams. Then Tootie further remembers that men are not allowed to touch women who do not want to be touched. He muses that men who touch women without their permission are - they both cheer merrily in unison - rapists!