EXCLUSIVE: A PICTURE OF DR. DAVID THORPE IN A TUBE TOP 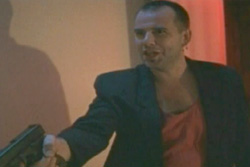 Save for some basic exaggerations that I hope made my update go from "unfunny" to "unfunny with some exaggerations," everything I wrote here was true. I did, in fact, eat each of these dishes twice in the last 72 hours, and I have eaten all of them before at some point or another prior to that. For the mathematically disadvantaged, that means that I have eaten each of these things at least three times now. I don't know if I should thank SA Forums user "unitseven" for giving me the idea, or if I should track him down and force him to watch Hunting Humans about fifty times. Speaking of...

In my last review I took a critical look at "How to Make a Monster," which was pretty goddamn bad. Well, folks, after watching my next round of review fodder, "Urban Menace," I can honestly say I wish I got to watch "How to Make a Monster" every week. I'll have a review a week from next Wednesday, assuming the DVD doesn't go sentinent and attempt to kill me in my sleep.

Per usual I'd like to end this gripping Daily Dirt with a sincere thanks to all the people who take time to write in. I enjoy feedback almost as much as fellow staffer Tekky "Jumpman16" Andrew-Jaja enjoys those pens that spell your name out for you as long as you just hold a button in. Keep writing in and I'll keep trying to respond.