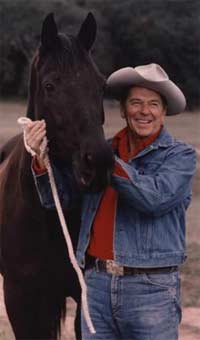 The former leader of the free world and Ronald Reagan.While looking out the window today, I noticed 2004 was just about over. Straggling on the bloodied floor like a gutshot bear, 2004 clings to precious few days of life somehow unaware of its impending doom. Soon a new year will dawn, and 2004 will not be able to survive inside the harsh atmosphere of 2005. But really, who cares? 2004 was a monster of a year and deserves the worst. In this new era of golden enlightenment, we can look forward to much wonder and excitement. I'd love to write all about that excitement but I'll be dead before then. My last New Year's Resolution was to hang myself if Ralph Nader didn't win the election. So, I'll write about this lousy year instead.

It occurred to me that this was a year to remember, unlike the last few decades. Then, when I started trying to remember everything that happened this year, not much came to mind. 2004 was the year that Michael Moore continued to be fat and get made fun of for being fat, the world, guided by America, continued to be dumb, and people yapped endlessly about elections from beginning to end. If that's 2004, then I reject it as I reject high prices, the Salvation of the Lord, and subscriptions to numerous magazines in spite of whatever savings I might get off the newsstand prices.

Let us start this 2004 remembrance by taking a moment to acknowledge the people we lost this awful year.

Ray Charles
Legendary musician Ray Charles died when he failed to see a posted stop sign. His mishap resulted in a fatal car accident that took his life and those of six puppies and one third of a pumpkin. Ray Charles is survived by his piano, which he legally married in 1973.

Ronald Reagan
Former lunatic president Ronald Reagan continued America's fine tradition of never electing a qualified person to an important office, a value we still hold dear today. In his two terms, Reagan is remembered for blowing up several small countries that could have killed us had we not killed them first. He wiped Libraria off the map, for Pete's sake! The former president and actor briefly united the world for the first time when he died peacefully due to an inability to remember to live. He will always be fondly cited in high school textbooks for "trickle down economics," which, like all economic theories, is fantasy nonsense sorely lacking in Orc battles.

Yassar Arafat
Arafat, a constant fixture of the ongoing Middle East turmoil, shocked the world by dying, coming back to life in a coma, then dying several times over the course of a few days. When he was finally satisfactorily dead, the world was united in hope that the next Palestinian leader wouldn't be so hideous looking.

Rodney Dangerfield
Legendary comedian Rodney Dangerfield inspired a nation by proving one joke is all you need to barely cling to success. His bold notion lives on today in the form of formulaic comedy, something I routinely take advantage of due to a lack of creativity and a desire to never be anything more than mediocre at best. You have my respect, Rodney. Hopefully you and Jonathan Brandis are having fun in the afterlife being endlessly chased by bees.

Christopher Reeve
The man who convinced us to believe we could fly if we were cast as Superman in a major motion picture past away after a long battle with paralysis. If I know my comics, it won't be long before four different people show up proclaiming themselves to be Christopher Reeve. The cyborg one will definitely be evil. Make a note of that.

Old Dirty Bastard
Rapper ODB died trying to rescue kittens from a burning building in war torn Chechnya, proving his heart was as gold as his teeth. He is remembered as a founding member of the Wu Tang Clan and celebrated for his law-defying antics clearly inspired by Grand Theft Auto (the Ron Howard film, not the game). At some point in his life he may have also actually recorded music, but I'm not sure.

Craig T. Nelson
Is not dead. My mistake.

Craig T. Nelson
We will miss you when you die, but we don't really care about you at the moment.

Now that the celebrities and world leaders are plugged and buried, let's take a look at the moments that truly defined 2004 as the most worthless year since the one before.

Half-Life 2 Makes Nerds Cry
In one of those monumental moments for mankind, a video game came out and it was pretty good. After tense months of release date rumors and frantic hopes for an early (but still late) launch, Half-Life 2 came out and proved that it was exactly as every game magazine had said in explicit detail. There were no surprises whatsoever and whatever plot there was happened in the background while I was busy fighting crabs in a mineshaft or trying to flip a dune buggy over with a gravity gun.

Scott Peterson Mania
In a sad state of affairs, Americans were glued to coverage of the Scott Peterson murder trial. The reason for this event is simple: Americans are apparently retarded and unable to avoid the things that make them such. In a magical age where people get slaughtered on a daily basis both here and especially abroad, fixating on one single case of murder seems rather insane, if not inconsiderate to the other dead people. If I wanted soap opera drama I would watch soap operas while possibly getting cranky and emotional due to complications with my menstrual cycle. The time spent discussing Scott Peterson's trial on news programs was simply ridiculous. No wonder we don't know anything practical. 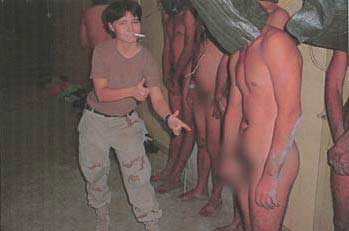 Quick, snap my picture! This is going to look awesome on the war crimes page of my scrapbook!

Iraq
This was a year where pretty much nothing went right in Iraq. In that regard, this was a year like any other in Iraq. Abu Ghraib smeared ugly all over the already ugly war thanks to unpleasant pictures of Lynndie England and friends cheerfully abusing prisoners. I realize running a prison is no easy task, especially since I did that prior to becoming a writer on this website, but it's generally not a good idea to take photographic evidence of prisoner abuse. That's literally the worst idea since Hitler sauce. Also thousands of people died on both sides, things exploded like mad, and it doesn't really look like we're doing a very good job there in spite of all the people we send over. Thankfully no one is taking responsibility, so it looks like this is just one of those things that happens naturally and there was no way anyone could have prevented it.

Summer Olympics in Athens or Australia or America or Somewhere
I forgot to watch the Olympics yet again so I hope they succeeded and I hope all the athletes won a lot of medals because they are all winners in my book.

News Anchor Retirements
In a shocking move, the news anchors became newsmakers when Tom Brokaw volunteered to go back in time and fight in World War II and Dan Rather finally admitted he's been making everything up all along. Tom Brokaw has already been replaced by Henry Rollins and a successor to the retiring Dan Rather will be named sometime in the new year. Peter Jennings lives on, but if he leaves the news desk his collar will explode.

Ukraine Election
I had no idea people lived in the Ukraine, but apparently they are as lousy at democracy as we are. I have to hand it to them, though. Incorporating poisonings and having the entire population sit out in the freezing cold is a very dramatic touch. I really hope the poisoned guy wins because it's always nice to see people overcoming odds. I know nothing about him or the Ukraine, so I apologize if I just endorsed the next Hitler.

U.S. Election
After hundreds of millions (if not trillions) of dollars were spent, absolutely nothing changes here in the country that God built out of spare bits of glory and pride. I have to say this whole thing could have been done a lot cheaper and the money could have been better spent elsewhere. I suppose we should be thankful our democratic process doesn't involve civil war or poisonings, but it also doesn't involve variety or quality. At least civil wars get the general public involved.

And now, at the end of 2004, we are witnessing one of the worst tragedies in recent memory unfold. This year has brought nothing but pain and suffering to the world. I say we go through with our plans to end it and make 2005 much less hideous.

As a helpful reminder, remember to set your clocks back one hour on New Years day to take advantage of the added daylight.